Routes in The Wudu Wall

Access to Keketuohai has constantly changed. There was a time when the park management did not want climbers in the park at all. But a dedicated crew of climbers, both foreign and Chinese, have convinced the park that climbing can be a benefit to the park's bottom line, culture, and reputation. As of summer 2016, foreigners and Chinese alike can camp within the boundaries of the park.

However, this freedom does not come without red tape. Be ABSOLUTELY CERTAIN to register with the local Keketuohai police, so they are aware of your presence in the area. You need to also sign waivers with the park management.

High on a bluff overlooking the Small Bell （小钟山）and on the far bank of the Irtysh River is a steep wall of granite that looks very unlike the surrounding domes. This is the Wudu Wall. It offers some of the best cragging in all of Keketuohai. While the area is known for its long multipitch dome climbs, the route character on the Wudu Wall is different: vertical, and sometimes even gently overhung routes from 2-4 pitches high offer some of the finest hard climbing in the park.

The wall always some shaded aspect. The wall is west-facing, so it is a fine place to go and watch Small Bell bake in the summer heat. The wall is a complex formation, unlike many of the monolithic domes in the park. If one area gets some afternoon sun, chances are you can scurry along the base of the wall to find a shaded route.

What's in a name?: The Wudu Wall (translates as "5 Poisons") was named for a poison of legend used in ancient China that was created by putting a toad, scorpion, centipede, snake (a viper), and spider (sometimes swapped out for a lizard or tiger in different legends) into a jar to fight, thus mixing their poisons. More recently, 5 Poisons and pests in general were tropes of the Chinese Communist Party. Early on, Mao declared a campaign for eradicating pests from the countryside, decreeing that citizens must exterminate mosquitoes, sparrows, flies, and rats. Sparrows were replaced by bed bugs after the extermination of sparrows led to infestation of crops and crop failure contributing to China's famine in the 50s. In the modern Party, the 5 Poisons was used as a metaphor for the 5 kinds of corruption the government wanted to stamp out, including bribery, tax evasion, theft of state property, cheating on government contracts, and stealing state economic information. static1.squarespace.com/sta… static1.squarespace.com/sta… find a guidebook for the wall here

Getting there is currently a bit of an adventure until some sort of footpath is constructed along the river. You must find a slack area of the Irtysh River and swim a line across to the opposite bank and then track up or downstream to a point at which you can fix climbing ropes across the river as a Tyrolean Traverse. One possible location the slack area just downstream from underneath the formation. You can then walk back upstream to the narrow rapids and set the traverse across the boulders. Once you are underneath the formation, you will need to trend uphill and right into a broad, grassy gully. DO NOT go too far left towards the toe of the formation. You will find lots of steep, dirty terrain, and you will eventually get cliffed out. 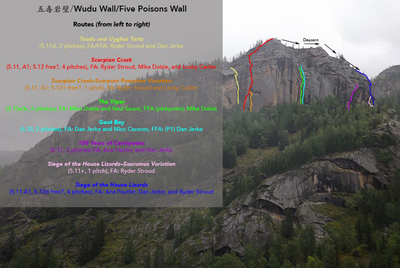 View up to the Wudu Wall with most of its major…

All Photos Within The Wudu Wall


More About The Wudu Wall