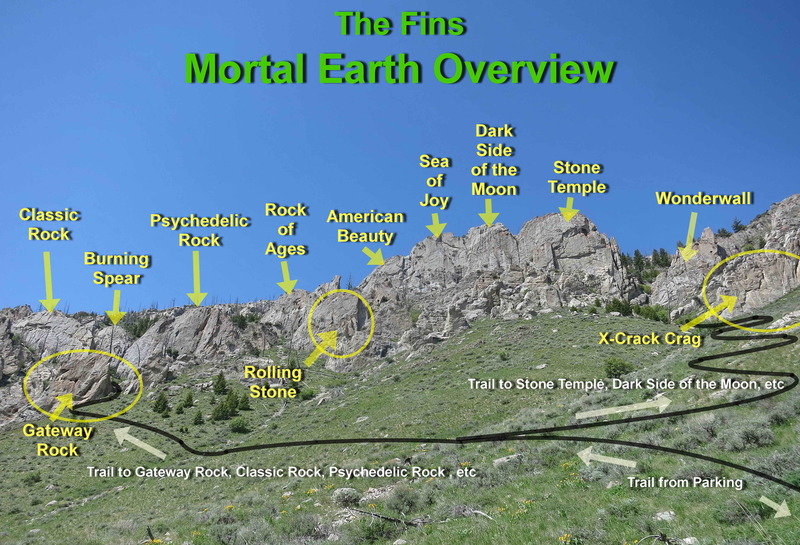 Mortal Earth Overview as viewed from the parking.

Mortal Earth is a *mostly* newly developed area at a slightly lower elevation than the main Fins climbing area. The area was known as the Burning Spear area and there were 6 routes on 3 different crags mostly developed in the late '90's and early 2000's. Despite excellent stone, a few good routes, and tons of new route potential; the area did not receive a lot of traffic and there was no established trail to the crags and the climbing.

Development in the summer of 2017 by Chris Barnes, Vernon Phinney, and Mike Engle opened up new crags and new routes at a rapid pace. After consulting with Dave Bingham (route developer of 5 of the existing 6 routes), Dave agreed to the proposal that the new route developers could re-name the area Mortal Earth.  Burning Spear is now one of 15 major crags in the area.

There is an established trail from the parking with a fork after a couple hundred yards.  From here the trail makes a complete loop through Mortal Earth.  The parking is accessible by 2 wheel drive vehicles and there is currently room for about a dozen vehicles if people park respectfully and logically.

On this page, the "Areas in Mortal Earth" (crags) are sequenced 00 through 12 in the sub area list.   When you hike the Mortal Earth access loop trail clockwise, "00 Gateway Rock" will be the first crag you encounter and '12. X-Crag" is the last.

The routes in Mortal Earth are on vertical to less than vertical grey limestone with the occasional small roof, bulge or overhang. In general, the routes tend to be less steep than The Fins and as a result the climbs are of a more moderate nature. Climbs range from 5.6 to mid 5.12 with most of the routes in the 5.10 to 5.11 range.

Each crag has a different character to the rock but in general you will find shallow pockets (sometimes deep pockets), pinches, rails, crimps, runnels and some amazing Chert pinching. The rock is of high quality and ranges from very clean to having some lichen and/or moss. btw, Chert is a hard, dark, opaque rock composed of silica (chalcedony) with an amorphous or microscopically fine-grained texture. At Mortal Earth, the chert provides a large variety of small to massive positive holds.

Routes tend to be long single pitch or 2 pitch climbs (75' to 250') with the average bolt count being around 10-12 bolts per pitch though some pitches can have up to 18 bolts. Typically, the climbing is characterized as thoughtful, technical, and sustained. The route developers are building safe routes with lots of 1/2" bolts on Fixe hangers and usually the clips are right where you want them.   It is recommended to bring 20 quickdraws and 6 alpine draws to Mortal Earth as many of the 2 pitch climbs can be led as one long pitch requiring many, many quickdraws and rope management to minimize rope drag..

A 70 meter rope is recommended though nearly all the routes can be descended with a single 60' meter rope (with the 2-pitch climbs requiring 2 rappels or one lower and one rappel). There are a few single pitch climbs requiring 2 ropes to get down.  Sometimes on the long single pitch climbs, a 70 meter rope will get you down but a single 60 meter won't quite make it.  Often it's possible to lower or rappel to another routes anchors and get down with a 60 meter.  Most of the route descriptions have specific beta for the descent in the protection section but pay attention, don't make assumptions, and knot the ends of your rope.

Anchors are either sport anchors consisting of an open cold shut and a steel carabiner for convenient lowering (and are not meant for hanging belays!) or in the case of multi-pitch routes, the top of the first pitch usually has chain anchors consisting of two lengths of 3/8" chains and quick links.  The top of the second pitches sometimes have chain anchors but most often there at sport anchors.

Note: On some of the 2 pitch climbs at Mortal Earth, with a 60 meter rope, it is possible to combine the two pitches into one long lead and lower off the sport anchors back to to the pitch 1 chain anchors.  Then you can belay your second to the top of the pitch 2 and  lower them to the chain anchors or back to the ground.

Start your mileage at the turn off of Highway 33 onto the gravel FS 557 road. Continue up the main road to The Fins for about 3.3 miles. The road to this point is accessible by 2-wheel drive vehicles. Park near some powerlines and signs warning of buried power cables. If parked smartly, there is room for about 10 cars. 4-wheel drive is strongly recommended if you want to continue on to the main Fins and the upper parking.

There is a trail that contours the hillside up to Mortal Earth. There is a fork after a couple hundred yards and the trail makes a complete loop through Mortal Earth.  At the fork, stay left for Gateway Rock, Classic Rock, Burning Spear, Psychedelic Rock and Rock of Ages.  Take the right fork for X-Crag, Stone Temple, Dark Side of the Moon, Sea of Joy, and American Beauty.  The approach is 10 to 30 minutes depending on the crag you're headed for.

The developed crags of Mortal Earth are visible from the parking, see the beta picture.

Check out the aerial overview for trail and crag location. 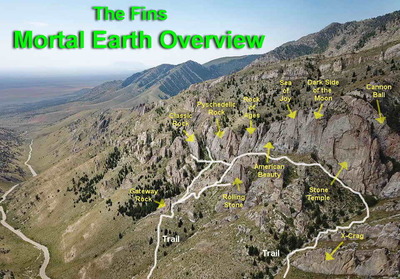 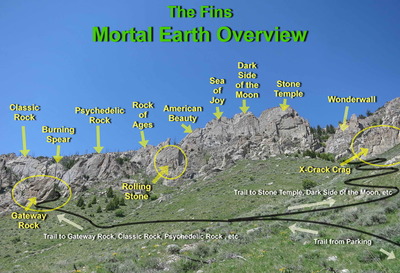 Mortal Earth Overview as viewed from the parking. 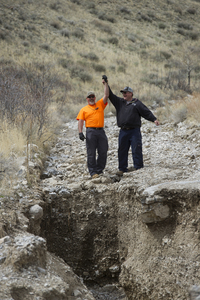 The Bull Dozer and Road Grader Operators who re… 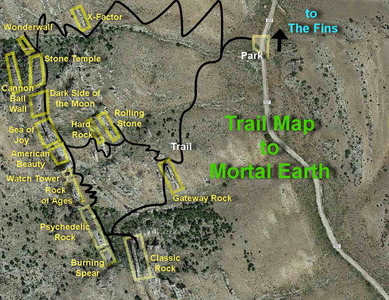 Trail Map showing the loop trail to and around… 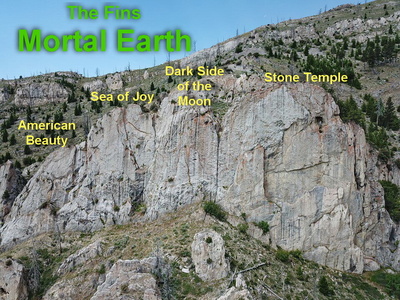 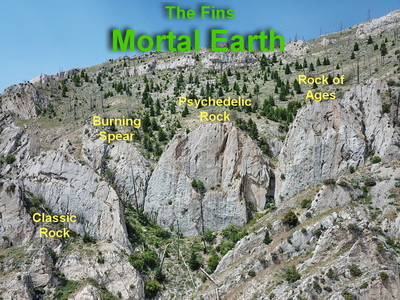 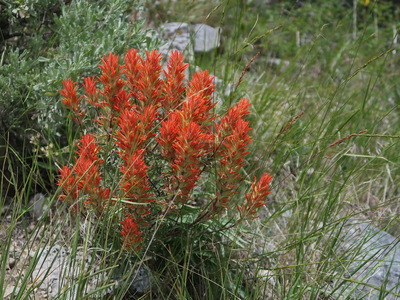 Indian Paint Brush at the base of Stone Temple 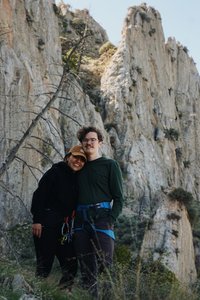 Jess and up on Mortal Earth 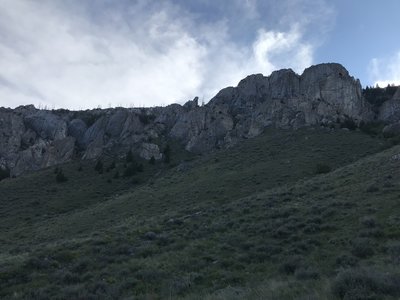 View of Mortal Earth from the road. Fantastic…

All Photos Within Mortal Earth