The Granodiorite cliffs and boulders overlooking Eaglet Lake at Giscome possess some of Prince George’s most accessible and popular climbing and bouldering. At present routes have been developed at 7 separate cliffs (Dance Park, Roadside Bluff, Eaglet Bluff, The Far Side, The Further Side, and Giscome II (Giscome West) in the area with each cliff having its own nature in terms of style of climbing, isolation, and approach. The style of climbing present at these cliffs is primarily high angle slabs with several slightly overhanging jug hauls and crimp fests available to provide variety. Bring a standard rack for protection as the majority of the routes are mixed. Extra small stoppers and cams would be beneficial to avoid long runouts and long slings are very useful at the belays. The MacGregor Mountains to east, Tabor Mountain to the west, and surrounding agricultural areas provide a stellar backdrop for the climbing. Trent Hoover’ s excellent guide to Giscome’s bouldering (the G boulders) is available atdrtopo.com. Giscome has relatively lengthy climbing history (at least for Prince George) with development beginning in the late 1970 and -early 1980s.
Protection ranges from sport style clip-ups to mixed and traditionally protected routes.

2. Continue on Upper Fraser road for about 23km (Giscome Elementary will be on your right) 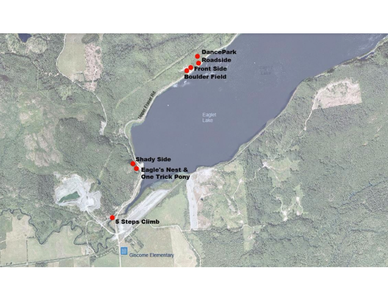