About a 30 minute approach.

First approach option from rusted green gate can be a little difficult to navigate, but it's all dirt and easier uphill hiking. Other approach option is to hike to CalTrans Wall, then take a fixed line up 3rd class slab. It's steeper and more "adventurous," but a bit more direct. See beta image for 2nd approach.

1) Take a hard Left immediately after the rusted green gate (almost back toward the hwy) and follow cairns uphill. Keep your eyes peeled, a few "false trails" here and there that dead end

1) Alternately, you can begin at the far Left of CalTrans Wall, following a fixed line up 3rd class slab. Follow line to tree at the top

3) Go directly uphill toward a short, standing twisted dead tree. From here you will see the climbing area in the distance

4) Briefly follow along the base where slabs of granite meet the bushes
5) As you begin approaching a few large boulders, turn uphill again toward several larger fluffy bushes, the biggest one at the base of the crag

7) You're there! From here you can see the start of both climbs, MU and Divided Sky. Bolts are difficult to see as they are painted and not shiny.

• MU 5.9 is to the Left and has its first bolt just above the tiny Charlie Brown xmas tree growing out of the crack

• Divided Sky 5.7 (named after the cafe that you parked and carpooled from because you're so considerate and awesome) is above the bushes to the Right, its first bolt on a shiny whiteish slab to the Right of a large D-shaped step up

Rappel is NOT available. Anchors are 2 bolts with hangers.

Your decision may have be based on how much you love trusting slab after all them pitches you just did, or simply what kind of footwear you have.

2) Walk off climber's Right and find your way down 3rd class slab. Slab descent can be hard to find at first; keep an eye out for cairns sitting on boulders overlooking dried up water runoff. Scramble down below the cairn boulders at first, then follow cairns closely for a more gradual and uninterrupted descent (see beta image). Note that the slab descent may be more dirty or wet from snow melt early in the season, which can make things more difficult or dangerous. 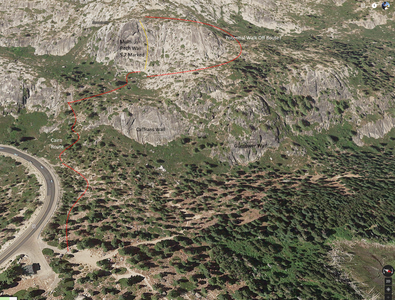 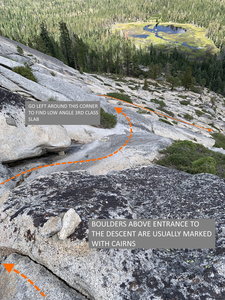 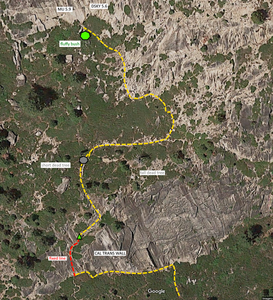 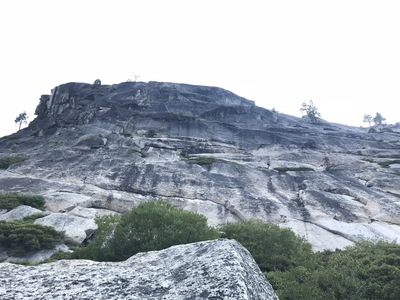 The formation containing the multipitch climbs.… 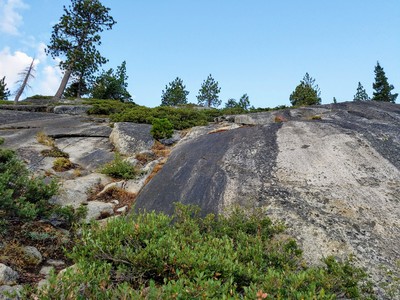 The fixed line from Cal Trans that'll take you… 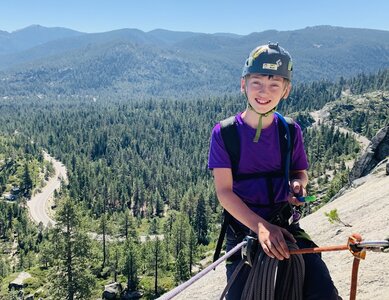 All Photos Within Meyers Multipitch