DARK SIDE BOULDERING CLOSURE
The debris field from the Sept. 20th rock fall reached the Dark Side bouldering area, and this area is now closed.


GRAND WALL CLOSURE
The base of the Grand Wall (between Sense of Urgency and Commando Crack) and all trails leading to these areas. This includes climbing routes such as Java Jive, Coyote, Flex Capacitor, Commando Crack, Movin’ to Montana, Knacker Cracker, Teenage Wasteland, Exasperator, Peasant’s Route, War of the Raptors, Cruel Shoes, The Flake, Apron Strings, Sunday Whites, and Sense of Urgency.

SLHANAY CLOSURE
All routes between and including Dogzilla and The White Feather.

The popularity of Squamish within the #vanlife community has increased to the point that there is great concern about the group’s collective environmental impact. “Wild” or “Freedom” camping has become unmanageable environmentally because of the high numbers of campers. This is a serious issue that causes conflict between locals, home owners, and climbers!

The  District of Squamish PROHIBITS camping within the municipal boundary. This includes sleeping in a vehicle anywhere within District boundaries. A bylaw gives the District the power to issue tickets for contraventions.

· The dirt road to the kitesurfing “Spit.”

This area is accessed from the parking lot trail (see Grand Wall page). The first boulder reached on this trail is the Titanic boulder.

For the Thighmaster area follow the trail north from the Titanic boulder. There is a large concentration of excellent problems here.

Mountain Project's determination of the classic, most popular, highest rated climbing routes in this area.
More Classic Climbs in Thighmaster » 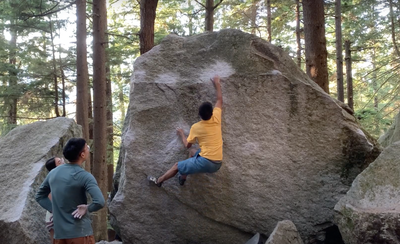 Johnny boy (AKA Face of VA Climbing AKA Influen…

All Photos Within Thighmaster