Areas in Waikato and King Country

A large area in the upper middle of the island that is home to the largest quantity of climbs and climbing areas. While it does lack the stunning multi pitch routes of the Coromandel and Lake Taupo, it makes up for it with a very diverse set of crags with a large range of rock types and climbing styles.

Many of the crags in the area are collectively referred to as "Wharepapa South" (A small village in the area). This used to be considered the centre of North Island climbing, before the development of Kawakawa Bay on Taupo and Castle Rock in the Coromandel. Their is still a large quantity of shorter cragging style climbing in this area. There used to be a climbing shop and caffe here, although it burnt down and has not been rebuilt. Some accommodation is available there for climbers (see rockclimb.co.nz/accommodati… for more information). Below is the description of the Wharepapa South area submitted from a user in 2009. Some of the information may be out of date, but it provides a good insight to the area.

Sitting in the center of this strip of climbable rock is a small town that goes by the name of Wharepapa (WH is pronounced as a soft f  Fah-rey papa) South. You wont find a market, or cellphone reception, or even a gas station here, but you will find a climbing shop boasting the largest selection in the country. Bryce runs a café/climbing shop/ hostel; he has clean dorm/private rooms or camping, a huge kitchen, a bigger gear shop, a bouldering cave for the occasional wet day, and his wife cooks up a damn fine pie in the café. In full disclosure I have no financial attachment with Bryces business: I simply stayed at his place for a couple weeks and I climbed with the guy a few times. I absolutely loved it there. To be fair, there is another accommodation option just down the street at Castle Rock. A farmer thought hed make a buck and start charging people to climb on the routes other people established. Now hes built a hostel of sorts, complete with tennis courts, a shelf of advertisements for touristy things to do in New Zealand, and a ticket booth to allow you access to the worst climbing I did in the country. If thats your thing have at it, just dont ask him anything about the climbing, he has no clue.

Wharepapa puts you in the center of most the established areas in the region with two crags in walking distance, four or five more within a 10 minute drive, and literally thousands of established routes within an hours drive. The potential for route development here is absolutely astounding.

Please keep in mind that youre in farm country, and you are climbing on private land, most of which are working farms. The farmers here have allowed total strangers to come onto their land to climb, asking nothing in return (with the exception of one farm whose name I wont mention *cough* Castle Rock *cough*) except that you respect their land and obey a few simple rules. As a general rule when youre on farmland:
 Leave all gates as you found them. Entry gates would almost always be closed but internal gates may be open or shut depending on where the herds are grazing.
 Leave the livestock alone and stay especially clear of steer (beef cattle). Theyll think youre there to feed them and 100 cows can stir up quite a ruckus when theyre hungry.
 No dogs. Period.
 No camping. There is camping at the school next to Bryces café. Talk to Bryce for accommodation.
 Youre on farm soil, that dirt you just laid your rope in is largely composed of decaying fecal matter. Something to think about before putting that rope in your mouth to high-clip. Bring a tarp. Better yet, clip at your waist.

You can get up to date info and printable guides for the local areas atfreeclimb.co.nz, or better yet just stop at Bryces Outdoor Center to get any beta you can imagine. His name appears on half the damn routes in every guidebook Ive seen in the area. Hes a climber, first and foremost, and loves to talk climbing. Hell give you good beta on just about anything.

Mountain Project's determination of the classic, most popular, highest rated climbing routes in this area.
More Classic Climbs in Waikato and King Country »

Just another day in Wharepapa South 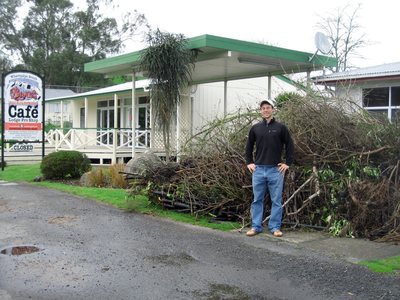 Bryce's cafe and climbing shop is indeed the ce…

All Photos Within Waikato and King Country


More About Waikato and King Country