Pandavapura is a taluk (council) in Mandya district, bordering Mysore. As of now Kunti Betta is the only major climbing area in Pandavapura, so this page focuses on that; we'll add info as and when other areas develop.

Kunti Betta refers to a temple complex comprising a school and a temple at the base, between two prominent hills on either side and one in the front. Within this complex, the hillock on the right side is called Onake Betta, a popular hiking spot. 'Onake' in Kannada means a 'pounding staff'; the distinctive feature of this hill is a 15-20 foot tall* pounding staff at the summit (perhaps used by the mythological supermen!/superwomen), visible from afar. Most of the bolted routes and boulders explored have been by a Mysore-based climber Prashanth Rajashekar in collaboration with visiting climbers and equipment by BCI; currently they are all on this right side hill.

The one on the left is Bheemana Betta and the one in the middle, Bakasurana Betta.

These hillocks make for fantastic family outings and beginner-friendly tours, offering a mix of climbing, bouldering, scrambling and hiking and temple visits. Different areas come in shade at different times of the day, so by shifting with the sun, you can spend an entire day in the pleasant shade even when it is hot/sunny in a tropical sense. Not even a tenth of the area has been explored/developed; the area holds immense potential for development as of 2016. Some majestic, very steep and challenging summit climbs 1-2 pitches long await the hard climbers.

A bit of background of the names:
Pandavapura means the town of the righteous five brothers, the Pandavas, in the Hindu epic Mahabharatha. Kunti Betta (Kunti Hill): Kunti was the mother of these five brothers: Yudhishtira, Bheema, Arjuna, Nakula and Sahadeva. Many of the climbs/rocks have been named in an attempt to blend the climbing activities into the local theme.

was destroyed (probably vandalized) in 2017 shortly after this video was taken.

Pretty easy access, about 20 mins off the busy Bangalore-Mysore highway (exit to Mandya-KRS Road), or 45 mins drive from Mysore. Approx. 3 to 3.5 hours from Bangalore. Srirangapatna is the closest town to stay. You could try public transport, buses plying to Pandavapur and hike the last ~1 kms to the temple.

Good place to park your vehicle at the base of the hill. 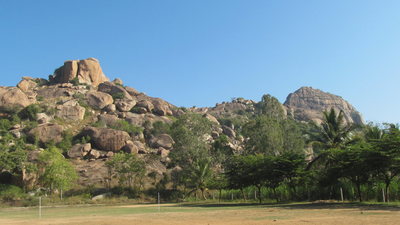 All Photos Within Pandavapura (Kunti Betta)