This mile-long mesa is the hulking massif dominating the heart of the VOG, with the loop road passing relatively close to both it's northeast and west aspects. In keeping with the somewhat confusing nomenclature that pervades the VOG, this mesa is also referred to as Battleship Rock on some maps. Even more confusing, the Sitting Hen is referred to as Franklin Butte on these same maps. However, in keeping with the "climbing" handles listed in Desert Rock IV and here, Sitting Hen is Sitting Hen on this site, and Franklin Butte will be listed as such.

The mesa presents fairly consistently sheer sides, with very few points of real weakness. However, I have seen a report of a recent venture linking weaknesses along the expansive northeast face at easy 5th class. The original route ascends the narrow east profile in two pitches at 5.8. It was first scaled by the prolific John Middendorf, with Melissa Wruck, in 1990. The description in Desert Rock IV is very vague. I haven't heard of any repeats, and would guess this summit has seen very few visitors, but who knows? Regardless, while the formation isn't aesthetically appealing, the summit is a cool sky island that offers the best panoramic views in the whole VOG given it's central location. I'm pretty sure you can see every tower and butte in the VOG up there. Well worth the trip for Valley connoisseurs for the summit alone!

The recommended approach for either the new route listed, or the OG East Arete, is via a short spur road off of the VOG Loop Road that is the same used to access the Sitting Hen. It cuts of west, between the Sitting Hen and Franklin Butte, and runs for maybe 1/4 mile, before dead-ending in a camp spot/turnaround just above a major wash. Low clearance vehicles should still be fine on this spur. 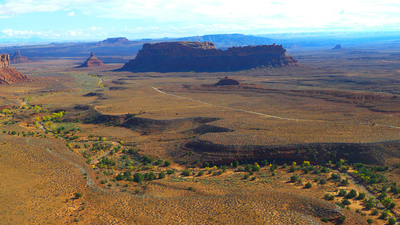 One of the only shots I have with Franklin Butt…

All Photos Within Franklin Butte