Find out who controls the land that you want to climb on and arrange to meet them face-to-face, before you start climbing.

Explain what you want to do. It is usually customary for foreigners to pay a small fee

Papua New Guinea is a culturally, ethnically, linguistically, geologically, and ecologically diverse country. The country should only really be considered as a climbing destination for people who are looking for adventure, off the beaten path. People who prefer the convenience of popular crags should look elsewhere. However, for those that are willing to put to put in the effort, Papua New Guinea can offer a unique experience.

Climbing is not an established sport in Papua New Guinea. As far as I am aware, there are no established crags, bolted routes, or large communities of climbers.

There are some established guiding services for popular treks (Kakoda trek, Black Cat Trek, Mount Wilhelm, etc.) who may be able to help climbers, but I do not know of any guiding or logistics support organizations that cater specifically to climbers.

All three parts have a similar geometry with sedimentary basins
on continental basement in the S and a hinterland of metamorphic and oceanic rocks including ophiolite and volcanic arc assemblages in the N.
Islands that lie to the NE and E, the Bismarck Archipelago and Solomon Islands, do not fit this pattern. They are thought to have formed solely by intra-oceanic volcanic arc activity and, in the case of the Solomon Islands, accretion of a mostly-submarine volcanic plateau.

While Papua New Guinea is a relatively rugged country, much of the exposed rock is relatively young and unconsolidated or weakly consolidated. Finding quality rock is possible, but requires good luck or geological research.

Most of the Papua New Guinea has a tropical climate with high rainfall, so most rock is covered with thick vegetation. Roads and infrastructure is limited. Land access can be difficult is largely dependent on the local clans that control the area. These factors combine to make finding desirable climbing routes relatively difficult.

Fly into the capital city of Port Moresby. 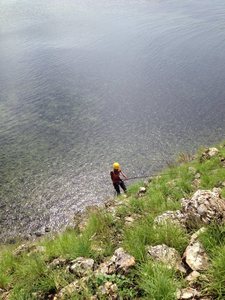 Rapping down the cliff

All Photos Within Papua New Guinea