Like a little cirque, with a big corner on its left and a ramp on its right.
So far (as of August 2016), it has three 2-bolt anchors, one for Sport (left face), two for Trad (left corner and right ramp). The right ramp likely could be used to set up top anchors for Top-Roping routes on the left side of sector 3 Trident.

Name: Galen Rowell is most famous as a ground-breaking photographer of mountain climbing, but he was also a strong bold climber. Grew up in Berkeley, later settled in Bishop. Led the first "clean" ascent of Half Dome (without using rock-damaging pitons) -- and also photographed and reported it for a famous popular magazine. Soloed some high-mountain routes in the southern Eastside. His photos with stories book High and Wild inspired many to get into mountaineering, and especially in the Sierra -- (What more he could have accomplished if not killed in an airplane crash).

warning: The rock in this sector has not been climbed much yet, and much of the rock is still breakable and loose -- so the belayer and other people should stand far away from underneath the climber.

Follow the instructions on the Rush area description page to reach sector 7 Hill. Then turn Left and walk/scramble N about 600 feet (with some ups + steep downs) to reach this sector. (9-18 minutes)

Or at times of low water flow in Rush Creek, consider the "Alternate hiking/wading approach" described further down on the Rush area description page to reach sector 1 Farquhar, then scramble steep up right. 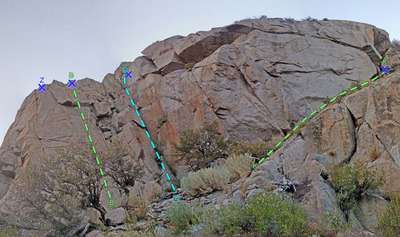 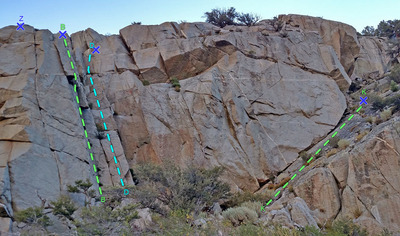 All Photos Within 2-Rowell