Basso Valtellina is the climbing area located in the lower valley in the Province of Sondrio from the north end of Lake Como to Delebio, Morbegno, Sondrio and east to Tresenda.

The valley climbing is located north and south of the main road, SS38, which travels through most of the major towns (sometimes slowly!) in a west to east direction. Basso Valtellina is also the gateway to the Val Masino and Val Malenco areas.

The valley is bound on the north by the Swiss border and by such high peaks as Piz Badile (3,308 m), Monte Disgrazia (3,678 m), and the big boy, Piz Bernina (4,049 m). To the south are the mountains of the Orobie Prealps in the provinces of Bergamo and Brescia as well as the iron town of Premana, the home of the climbing hardware manufacturer C.A.M.P. (Concezione Articoli Montagna Premana translated to Conception of Articles for Mountaineering made in Premana) founded in 1889 (!).

Rock type is typically gneiss with some schist, granite and conglomerate. Elevations range from 300m to 2000m.

From the west/south: take the SS36 which travels mostly through tunnels past Lecco on the east side of Lago di Como. The SS36 at the end of the lake splits off to the north, while the Basso Valtellina area begins to the east at the start of the SS38 road.

From the northeast, head downhill from the upper end of the Alta Valtellina at Bormio, past Tirano, to the Basso Valtellina.

The eastern approach would be on the SS39 from Edolo. 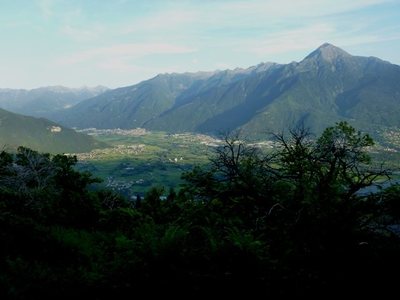 From a hut above the end of Lago di Como, looki…

All Photos Within Basso Valtellina