Some beautiful boulders, features and problems can be found in this area. Some of the problems and/or boulders are spread about, and some are concentrated. Nice and ugly, highball and one-move-wonder, static and dynamic, roofs/steep overhangs to slabs; this area offers a wide variety of climbing.

Per an early developer of the Rock Run Ridge Area that wishes to remain un-named "People have been climbing there since the 90's. John Derr & Brendon Steger have developed much out there along the ridge and adjacent ridges in the 2000's; as well as a dedicated crew from Williamsport in the early 2010's."

From the parking pull-off there are boulders spread out below the road, down hill, but what's mentioned here is up hill.

1.2 miles past the Godzilla Boulder, Main Area parking pull-off (on the "upper road", taking a left at the fork) pull off and park. If you look left, up hill, this area is straight up. Roughly a 10 minute hike up hill to the cliff and largest concentration of boulders in the immediate, small area. 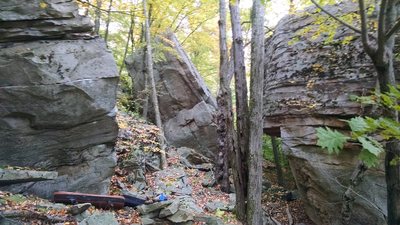 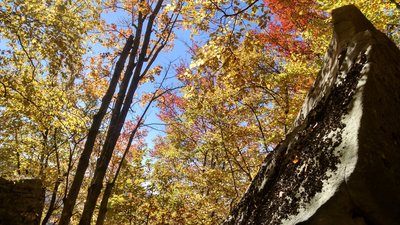 All Photos Within Ridge Area