Areas in Southern NH and Seacoast

This is a catch-all for all the smaller areas in southern NH from Concord down. Since Pawtuckaway is such a developed destination, it has its own area here

Southern NH holds some pretty cool climbing, it just tends to be smaller and wide spread. Mini-cliffs and small pockets of bouders exist in nearly every town, they range from sweet hidden gems to chunks of stone nearly worth developing but more likely to be "discovered" by each new generation of climbers and forgotten about.

A few quality standouts include the impressive but neglected Rock Rimmon in Manchester. 100 feet high and home to over 60 routes, mostly on the easier side of the scale. I am convinced that if it were in a wilderness area this would be one of the most popular beginner crags in NH and it's more difficult routes would receive the attention they deserve. As it is, the urban residents have effectively claimed it as their own.

Stonehouse Pond is absolutely stunning and under utilized. Sitting next to it's picturesque New England pond it brings to mind a castle protected by it's moat. Very worth stopping by to storm the gates.

Dumplington Hill (The Dump) is a place I have never climbed but I have gone once or twice to look around. As i type this im once again wondering why I have never climbed there, Force of habit perhaps? It's granite cliffs and boulders are like those of pawtuckaway but without the crowds.

The more you explore the smaller areas in the southern part of the state the more you will see that it isn't always necessary to drive an hour or more to get some good cragging. We are in a state that holds plenty of options for a quick after work session. If you aren't near any of the areas listed above simply step off the beaten path... This is the granite state after all.

With the exception of Stone Arch Bridge in the western part of the state near Keene, most of these areas are located off the main Interstate Highways of Rt 95 (aka the New Hampshire Turnpike) and Rt 93, and the excellent state highways, the Spaulding Turnpike (aka Rt 16) and Rt 101.

Check the Google Map to the left on this page for specific areas and their locations. See the individual areas for specific directions.

Boston has a major airport, and most of the areas in the Southern & Seacoast Region are within 2 hrs drive. Manchester has a fairly large airport and is very centrally located to most of areas in the Southern & Seacoast Region. Portland, Maine also has a commercial airport, slightly less service than Manchester, but may be closer to many NH areas than Boston, and it is also far less of a hassle than the virtually downtown Logan in Boston.

Mountain Project's determination of the classic, most popular, highest rated climbing routes in this area.
More Classic Climbs in Southern NH and Seacoast » 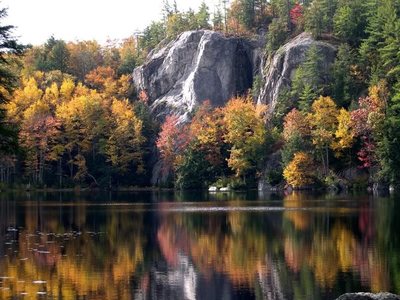 Stonehouse Pond in October. On the far left you…

More About Southern NH and Seacoast

All Photos Within Southern NH and Seacoast