Flagstaff is blessed with abundant, high quality bouldering on several different types of stone. With almost every style available from monstrous pocketed limestone roofs, the technical granite like crimps of our local dacite, to the slippery slopey local "fontesque" sandstone, you are sure to find something that tickles your trigger.

These areas are right in town, or within 20-30 minute drive and approach time. Perhaps the only true in-town bouldering crag, Buffalo Park has a small basalt wall and separate boulders found on the east side of this rather expansive city park. With a five minute approach time and grades that run the scale, this place has a little something for everyone though the landings aren’t the best.

Towards the south we have Kelly Canyon which often times features slopey, gymnastic bouldering on sandstone walls with demanding top outs. This is a true bouldering crag, though a harness and a short rope may become crucial elements for cleaning lines of debri for successful attempts. Extra pads and supportive spotters is a plus.

Still south of town but very close you will find The Ridge which showcases sweeping limestone bulges with amazing, often positive features. The bouldering here is built for route climber’s who don’t mind airing it out on hero holds and the top outs are generally featured. The grades are often moderate but walls like The Booze Pig Wall, The NPR Wall, and The Long Ryders Wall will deliver more difficult grades up to V8 with confirmed classics.

A few miles south of The Ridge is the famed Priest Draw which features the same type of limestone though the trophies here are the many pocketed roof problems which have drawn talent from around the globe for decades now. It’s a perplexing style for many, however, if you spend a lot of time in a bouldering gym you should fare better than most. It’s a beautiful area with more or less four season access.

Immediately north of town is Mt Elden which features volcanic Dacite bouldering on weathered boulders or highball walls. The style here is predominantly crimpy lines though juggier affairs can be found. The most recognizable and convenient area is known as Gloria’s which features four season access and just a ten minute walk to the boulders. On the far west side of the mountain you’ll find West Elden which is an old school trad crag with big boulders tossed about the base. These clusters of blocks have produced challenging problems going back to the 1970’s. Finally, there is a newer and more spread out area called The Skyline Boulders. You’ll have to own the approach and be ready to do some exploring, but this area features several modern Dacite test pieces in a more secluded setting.

To the northwest lay the famed San Francisco Peaks. These volcanic Dacite areas are often found in pristine condition and nestled away in thick forested folds. Freidlein Prairie may see the most traffic and showcases many of the test pieces to be found on the mountain. The First Gully Boulders are strewn about the base of an intermittent cliff band known as The Peaks Crag. This magical and somewhat expansive area is home to a number of classics if you don’t mind doing a little exploring to find them. Viet Springs is a smaller area but hosts a few of the most classic moderates on the mountain. Both The Exhumer V3 and Chuck Taylor V4 are worth the walk and found in a beautiful Aspen grove.

Finally to east of town, out in the cinderlands lays The San Francisco Wash which holds several basalt areas with Turkey Tanks being the most traveled. This short row of columnar basalt is riddled with weird pockets and caters more towards the moderate to mid grade boulderer. 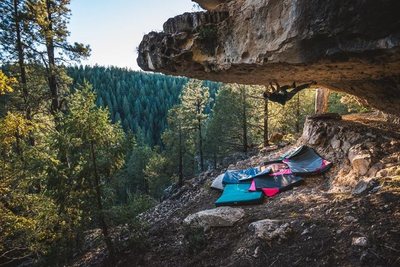 Matt Gentile at one with his environment on Ren… 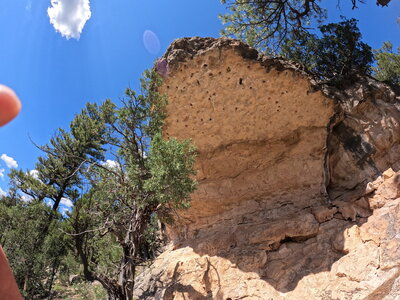 All Photos Within Flagstaff Bouldering*