Much like its neighbors to the north, Southie shares many similarities with the Mecca and Pink Floyd areas. There is an abundance of rock, the quality is very good, and the style of climbing is primarily low-angled. In addition, the majority of Southie is rarely visited and far from the highway. This either makes for a tough hump or a nice getaway.

Southie is large, it consists of a land mass that measures approximately ½ mile long by 1/5 mile wide. As the name implies, Southie represents the southernmost developed boulders of the Nine Mile Hill. The area begins on the hill directly south of the Mecca area, then extends uphill to the canyon wall, and includes the remaining strand of boulders that continue south along the rim.

Overall, the area possesses some phenomenal problems, get out there!

Southie can be accessed via two footpaths.

Footpath 1: this path leads to the middle of Southie, but it does miss many of the boulders that reside on the hill that leads up to the area. Leave from the parking area with the green gate, head downhill, cross East Creek, head uphill, make a left on the dirt track, and head toward the Mecca area. Once there, head up past the Mecca and Moby Dick Boulders, and continue all the way (there are sections where the path becomes difficult to follow) to the Gunny Gold Boulder. At that point, instead of going north to the Pink Floyd area, head south for about five minutes, and youll be in the heart of the Southie area.

Footpath 2: this path intersects the entire Southie area. Leave from the parking area with the green gate, head downhill, cross East Creek, head uphill, make a left on the dirt track, and head toward the Mecca area. Continue past the Mecca Boulder for about 50 yards, then veer right, cross an eroded drainage, continue from there in a southwesterly direction, heading uphill. Youll work through several tree stands and a pair of sagebrush meadows (there are sections where the path is difficult to follow). Continue uphill aiming for the canyon rim, and youll reach the heart of the area. Boulders within the area will be located along the entire trail.

Once you reach the area below the canyon rim, a footpath leads south through the areas remaining boulders.

Both trails are approximately ¾ of a mile long (to reach the center of the area) and take about 20 minutes to get to.

Please see the above description. 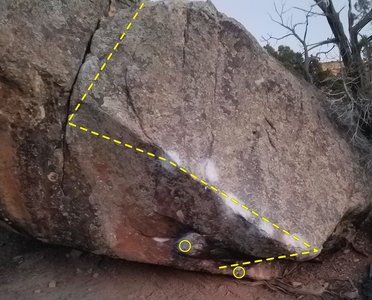 The circles are start holds, slap to the arete,…

All Photos Within Southie Area