There is sun most of the day. On some day it can be pretty windy. Not very crowded. Exception of the Grand Galets route which may have a party or two on the week-ends.
Good rock, some very strong gray granite and some orange rock which is a bit flaky on surface. Long routes: between 150 and 300 meters. Most of the free stuff is very hard with some moderate here and there. A lot of aid climbing. A portaledge may be useful on at least 3 routes.
Due to the annual closures due to bugs or peregrine falcon nesting, most routes need cleaning every year so don't forget your brushes.

Season: After the peregrine falcon departure and after thevicious black flies and mosquito season, early August to September. Please reach out to the park for details regarding the access. SEPAQ Fjord-du-Saguenay.

From Quebec, take the 175 North, in Chicoutimi take a right on the 170 towards the bay.  Stay on the 170 up to Rivière Eternité.  In the village, follow the indications, take a left at the gas station/depanneur and the entrance to the park is about 1 km away.  The parking is about 7km further at the end of the road.
Once there you can paddle 2 km by boat. They have a Zodiac pay shuttle service ($$$) but you need to book the travel in advance (Québec Hors Circuits +1-418-544-5959). There may be waves and there is some tides to check first. Otherwise, by foot, walk up to the statue and then, there is a flaged climber's trail that starts near a toilet on the right. about 3 hours from the register to the base of the cliff. 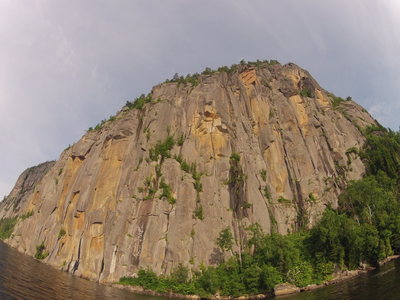 Cap trinité as seen on the boat aproach. 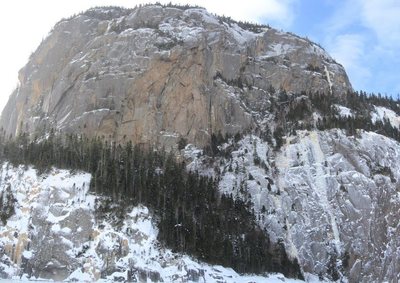 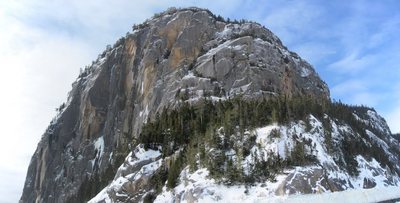 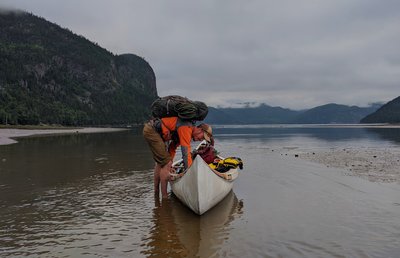 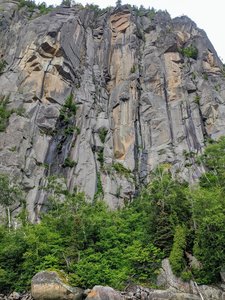 All Photos Within Cap Trinité