Per CT-DEEP, the Ballfield Slabs are temporarily closed due to active raptor nesting in the area.

West Rock Ridge State Park is located across several towns in CT, New Haven, Hamden, and Woodbridge. The cliffs are part of the West Rock Dolerite formation, created 140-205 mya during the Jurassic period. While it is similar to the central basalt Traprock, it is not actually the same. The 400-to-700-foot West Rock Ridge is part of is known as the Metacomet Ridge, extending from Long Island Sound to the Vermont border. Climbing has occurred at West Rock State Park for many decades though recently, has had a bit of a resurgence in popularity due to some recent sport and mixed route development on the South End.

The Ball Field slabs are an active nesting site for Peregrine Falcons typically from March to August. No matter the season if they become aggressive please consider backing down and giving them some space. Check raggedmtn.org/blog for information on what areas are closed to climbing.

The climbing has traditionally occurred in two places along the ridge, the south end and the large quarry north of the Merritt Parkway. Both areas face West and heat up quite a bit on sunny days making for great winter/cold weather climbing destination.

The south end hosts the majority of the recent development, route-wise with the largest documented sport and mixed lead climbs in the state. The south end is slightly off angle making most of the routes slab with exception of the old quarry on the southern tip which is entirely sport.

It is recommended any climbing in the quarry on the north be belayed from the top and any climber wear multiple helmets and even shoulder pads. Your rope can easily dislodge large flakes and blocks and recent visitors have found this out the hard way. While the cliffs soar almost 300ft and cause the mind to wander, it's a sketchy area. Take all precautions you can but understand that might not be enough if some kids decide to trundle some boulders off the top. There are reportedly some trad lines in this area but we have no record of them as of now.

WEAR YOUR HELMET AT ALL TIMES, FROM FIELD TO CLIFFS!

LOOSE ROCK AND PEOPLE THROWING ROCKS OFF THE TOP ARE COMMON.

DEEP Enforcement/Police will be called for large rockfall in the area. You could be ticketed for disorderly conduct for creating a hazards situation, as has been experienced by one fine New Haven resident, even though he wasn't even man with his hand on the trigger.

From the Merritt Parkway take exit 59 and travel south on Whalley Ave (rt 69). Take a left onto Emerson St and then a right onto Valley St. As you drive down valley take notice of the cliffs above the houses...from here you can see the paint stripe which ruined an otherwise great climb. As the road turns away from the cliffs a large parking lot on your left should be visible. Park at the back left of the lot near the foot bridge. Cross the bridge, cross the baseball field and follow trails up towards the cliff. The trail heads uphill and right then along the second tier follow a trail that traverses under the cliffs. Look for a cairn or two headed up to some 4th class scramble. Negotiate your way up the ledge to whatever climb you want. 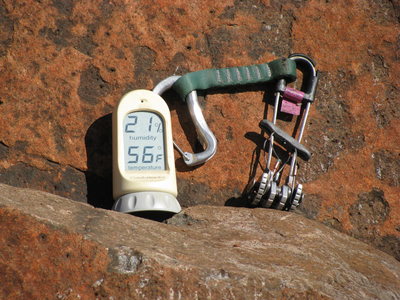 January climbing, high of 26 degrees in the sha… 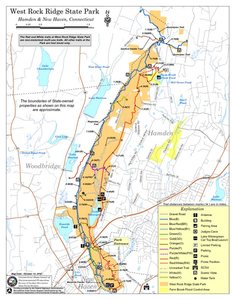 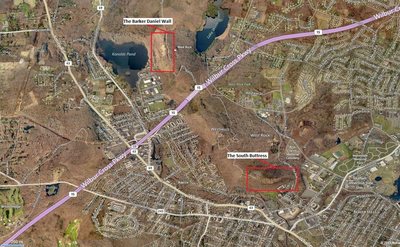