The High Knob Landform (HKL) is a massive mountainous region in the heart of Central Appalachia that is some 13 miles wide and 26 miles long, spanning  three counties (Wise, Scott, and Lee), and reaching 4,223 feet in elevation. By following the often cryptic, seasonal, back country NFS access roads you can find fantastic sandstone strewn throughout its entirety. In order to better organize this overwhelming landscape here on Mountain Project I'm separating the areas into HKL East and HKL West with the dividing line being the main High Knob Road (State Route 619) that bisects the HKL from north to south from Norton to Fort Blackmore.

There are many avenues of approach for reaching the HKL. A few of the surrounding towns are: Coeburn, Norton, Big Stone Gap, Duffield, Fort Blackmore, and Dungannon.

High Knob is found on the western front of the Appalachian Mountain range along the mountainous southeastern edge of the Cumberland Plateau of Southwest Virginia. It is unique to Virginia, containing both Appalachian Plateau and Ridge and Valley topography. The High Knob Massif is home to phenomenal climbing, wonderful trails, streams, fishing, camping, hunting, and a whole host of biologically diverse habitats. Below is a wide overview covering some of what makes this location so special.

The High Knob landform is gigantic in relation to most other sections of Central Appalachia that are North of Mount Rogers. Being a member of the Cumberland Mountains (separate from the Blue Ridge), High Knob is the tallest mountain of the Cumberland Mountain Range which also includes Pine Mountain, Cumberland Mountain, Log Mountain, Little Black Mountain and Black (Big Black) Mountain, as well as many others. High Knob is frequently referred to as a massif, with the term “massif” used to denote the main mass of an individual mountain. The word is taken from French (in which the word also means "massive"), where it is used to refer to a large mountain mass or compact group of connected mountains forming an independent portion of a range.

High Knob massif is one of the most significant physical features in Virginia and is among the widest singular mountains in the southern Appalachians, being locally greater than 13 miles wide from base to base and more than 26 miles long. The High Knob landform stretches across portions of southern Wise County, northern Scott County, and the northeastern tip of Lee County. High Knob represents the "pivot point" of the Cumberland Mountain Overthrust Block which is responsible for the wonderful, bullet hard, lee-type sandstone of the Early Pennsylvanian Age. Softer rocks have been eroded away, leaving the resistant sandstone formations found throughout the region.

Although some 1,000 to 1,500 feet lower in elevation than the Mount Rogers high country to the east (Mount Rogers is the highest peak in Virginia), the terrain surrounding the High Knob massif of Stone Mountain forms a true high country with respect to the western slopes of the Appalachians.

The High Knob area of Stone Mountain forms one of the greatest natural areas in the eastern United States. Today its calcareous heart has been breached by massive erosion to expose an ecologically renowned karst landscape which stretches from the Powell Valley area of Wise County, southwest across the Powell River Valley of Lee County to the Norris Lake of Tennessee. Drainage from High Knob has also formed hydrologically complex conduit systems which have directly led to formation of the magnificent Natural Tunnel and Rye Cove Karst Basin of Scott County where endemic species such as the Rye Cove Isopod are found.

The summit of High Knob in particular exerts a significant impact upon the climate of Southwest Virginia and surrounding areas, being one of the rainiest and snowiest locations in both Virginia and the southern Appalachians. This orographically forced climate has, through the vastness of time, worked in unison with the geology and topography to create a richly diverse landscape possessing vast biological diversity.

High Knob unofficially holds the record for the most snow ever measured in Virginia during a single season, with 200.5 inches during the winter of 1995–96. During a typical year, 60.0 inches to 70.0 inches of total precipitation falls across the area, making it one of the wettest areas north of the Great Smokies, and the wettest in Virginia. Significant additional moisture contributions occur from fog drip off trees and rime deposition on trees, with many days during the year being spent amid orographic feeder butts that cap its upper elevations.

On a clear day, four other states can be seen from the summit: West Virginia, Tennessee, Kentucky, and North Carolina.

(Big thanks to Wikipedia for all of that ^^^) 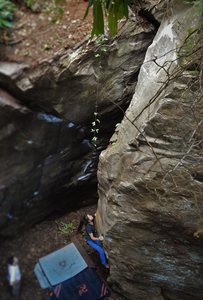 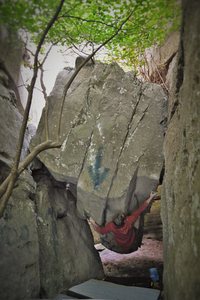 Jeremy Parnell compressing carats on the 2nd as… 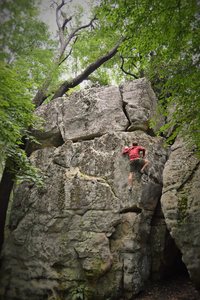 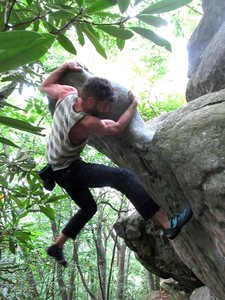 Parlier on the FA of "Plastron Gaston" on God's… 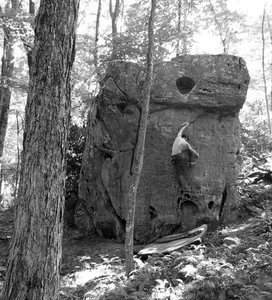 Aaron James Parlier on the FA of "Holy Moly"

Jesse on one of many glorious stones along High… 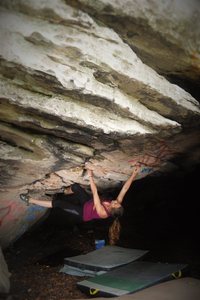 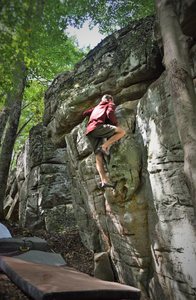 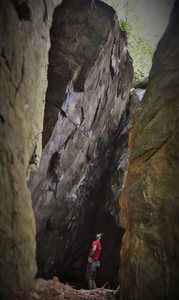 Aaron Parlier setting sights before the FA of &…

Christian Backman squeezing the impeccable and…

All Photos Within High Knob Landform