The current parking area is now limited parking, subject to the following guidelines:

No parking weekdays before 4pm. (Use Saltbox Parking Area at these times).
Do not block pump station access gates at any time.
Be careful not to hit or disturb manholes or other infrastructure.

The Saltbox Parking Area is a new resource, available on weekdays and weekends. Don't bushwhack or create new trails from this area.

Torne Brook Road and the trailhead remain a no-parking area. This is to ensure access for emergency personnel.

Inconsiderate or illegal parking here could lead to permanent closure. 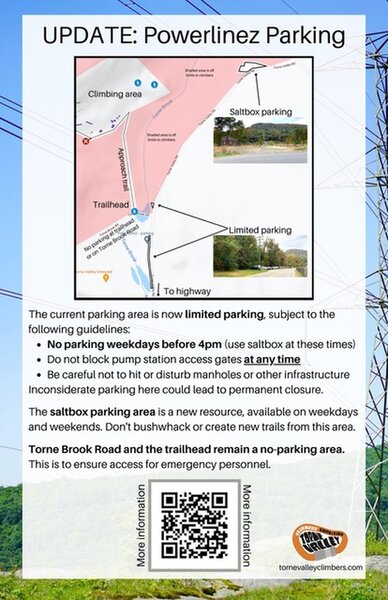 The largest rock climbing area within an hour's drive from New York City -- in the southwest corner of Harriman State Park. The rock of Powerlinez can easily be seen when driving north on the New York Thruway, just a couple miles north from the big interchange of routes 87 + 287 + 17 at the southern border of New York and New Jersey. It's big but it's not tall.  It has many interesting rocks for bouldering, but for rope-protected climbing the highest wall is about 80 feet. There are a couple of sectors higher than 50 feet, but most of the roped climbing cliffs are less than 50 feet tall -- good mostly for top-roping, but also some trad leading, and five short sport routes with bolts.

A Waiver must be completed (and renewed once a year) before climbing, but there is no fee. Rock is mainly granitic gneiss (hard metamorphic rock) or granite (or perhaps some different metamorphic rock up higher in the Books tier).  But while the rock is fundamentally hard, there had to be weaker parts to erode in order to form steep cliffs and positive holds for us to enjoy climbing -- so of course now some of the climbable rock is loose or breakable, especially as it's only starting to get climbed much - (If you don't want to deal with that, better wait a few years). This gneiss rock tends to have lots of interesting holds aimed in different directions -- and mostly high-friction (some would say "abrasive", or sometimes even "sharp") -- which together make for a high "density" of interesting climbing sequences.

...Climbing ... it's easy to find sectors with lots of good Bouldering problems close together. And also ...

Top-Roping several interesting lines close together works for many of the sectors (using a top anchor with a static line cleverly arranged so it can be quickly moved from one climbing line to the next alongside).  From the work of setting up one route, you get to climb several short interesting lines - (which helps compensate for Powerlinez being not tall).

Leading: There are some nice single-pitch routes which can be protected with Trad equipment on the Tower Wall, also some shorter Trad-protectable routes in other sectors.

Bolts? There are five routes with some bolts at Powerlinez -- but these bolts and hangers (zinc-plated steel) were there already before the area was officially opened, and they are not inspected or maintained by the TVCC or the Park - (Concern that Powerlinez might be in high-corrosion region for steel: with acid rain from the west, and salt water 40 miles to south and east) - see more detail and discussion on The Good Book sector page.

Placement of new bolts or other permanent fixtures for protection or anchors is not permitted (as of 2017). See Comments below.

Required Waiver form: Before arriving at Powerlinez to climb, you need to obtain and submit a completed + signed Waiver of Liability form. Waivers are available online through the TVCC. The waiver also includes an overview of where you should park, where you can climb, and how to make sure that the area remains open to everyone.  The 2019 Waiver Form can be completed online here:

Administration by the Torne Valley Climbers Coalition (TVCC) [ on Facebook ]. It was thanks to the work of some present and former members of the TVCC that Powerlinez was officially opened for climbing in 2013. The TVCC administers climbing usage of the Powerlinez area under terms of use agreed with Harriman State Park.. . . While TVCC has the title of "coalition", as of 2017 it has no general members or annual dues or elections ... Only some sort of governing "Board". Let's be grateful they found an organizational approach that works for them, to keep climbing legal (and getting better) in one corner of Harriman State Park. Though you cannot "join" the TVCC on order to help and support Powerlinez climbing, at least you can "follow" on their Facebook page and join events and support actions that the TVCC Board announces.Undeveloped:

The current policy of the TVCC as of 2017 is that the climbing infrastructure remain undeveloped, except for some approved maintained trails to make it convenient to get access to potential climbing. No routes or bouldering problems have been designated as suitable for climbing by the TVCC. It is the responsibility of each climbing party to decide which areas or routes or problems might be suitable or safe for them to climb (perhaps getting advice from other sources). Also any rappel or top-rope anchor materials (slings or ropes or bolts, etc), or any bolts or other materials for protection partway up on a cliff, have not been approved by the TVCC, and are not maintained or inspected by the TVCC or by the Park - (and installation of new bolts is forbidden). It is the responsibility of each climbing party to decide whether or how to rely on any anchor or protection materials they find.Please access the boulders and roped-climbing sectors by using the TVCC-approved trails (marked usually with white diamonds or sometimes yellow paint), or using already-well-trodden paths, rather than creating some new way. As of 2017 TVCC does maintenance of the few approved marked trails once a year or so, but (in keeping with TVCC not being a real coalition) not much of the unofficial "herd" paths needed to reach many of the sectors. So be prepared to handle overgrown (sometimes prickly) vegetation obstructing access to your desired climbing sector.

Boundaries: The area of Harriman State Park which has been opened for rock climbing is called the "Wrightman plateau" on the southwest side of Ramapo Torne. Key point is that this does not include the Ramapo Torne peak itself. Any cliffs or rocks higher than the "Books Tier" are closed to climbing as of 2017 - (so the biggest most visible climbable rock in the area, around the summit of Ramapo Torne peak, is closed to climbing).. . (also there are some rocks below out west or south which are closed to climbing, because they are now outside Harriman Park).Guiding + Instruction ... More info - other sources ...

Driving from New York City or New Jersey or PA: Go to the giant interchange of routes NY Thruway 87, 287, and 17 near Suffern NY. Exit onto rt 17 North, which immediately goes into a traffic light. Turn sharp Right on rt 59 South for about 0.5 mile. Just after curving left, up and over railroad tracks, turn sharp Left onto Torne Valley Rd (Rockland County rt 95) and go about 1 mile generally North with some curves, past the recreational center.

Driving from NY state coming from the North: NY Thruway (I-87) south to exit 15A for rt 17 North + rt 59, Sloatsburg + Suffern. Exit to the right, go 0.1 mile curving right to reach a T intersection. Turn Right (NorthEast) and go about 0.2 mile to another T intersection. Turn Right (South) and go about 0.4 mile. Just after curving left, up and over railroad tracks, turn sharp Left onto Torne Valley Rd (Rockland County rt 95) and go about 1 mile generally North with some curves, past the recreational center.

Currently, as of November 2021, the parking has been changed.

No parking weekdays before 4pm. (Use Saltbox Parking Area at these times).Do not block pump station access gates at any time.Be careful not to hit or disturb manholes or other infrastructure.The Saltbox Parking Area is a new resource, available on weekdays and weekends. Don't bushwhack or create new trails from this area.Torne Brook Road and the trailhead remain a no-parking area. This is to ensure access for emergency personnel.Inconsiderate or illegal parking here could lead to permanent closure.

The current parking area is now limited parking subject to the following guidelines:

No parking in the main parking area before 4 pm on weekdays.  Instead, park in the Saltbox Parking Area.

No not block pump station access gates at any time.

Be careful to not hit or disturb manholes or other infrastructure.

Do not park on Torne Brook Road or at the trailhead to Powerlinez.  This remains closed to ensure access by emergency personnel.

Inconsiderate or illegal parking here could lead to permanent closure.

Park by some 10-15 ft wide wire fence enclosures (sometimes called "the vents") and a green manhole cover, on the left (west) side of the road -- GPS latitude longitude approx (N41.1415 W74.1618). This is about 100 yards before (south from) the left turn for Torne Brook Rd. If you reach the entrance for the waste management facility on the right, you've gone too far.

Mountain Project's determination of the classic, most popular, highest rated climbing routes in this area.
More Classic Climbs in Powerlinez » 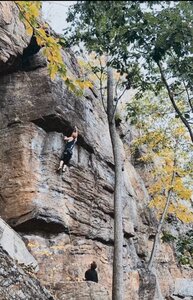 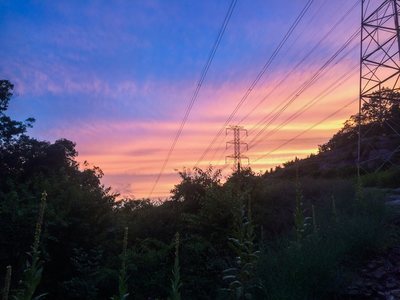 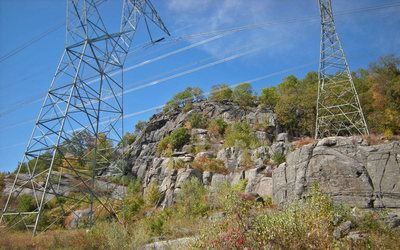 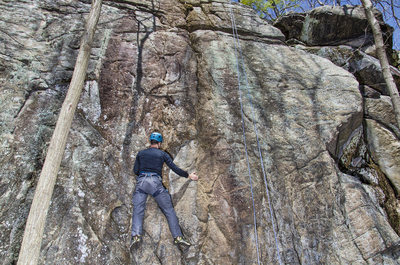 Kevin climbing The Fuzz 5.9- (I believe) 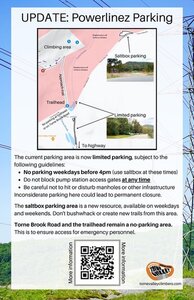 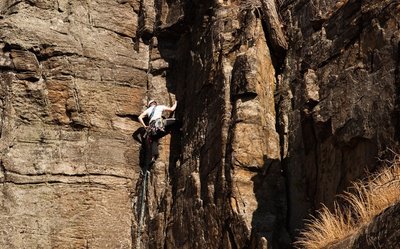 Getting on the tower wall 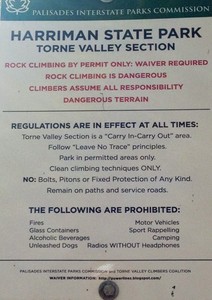 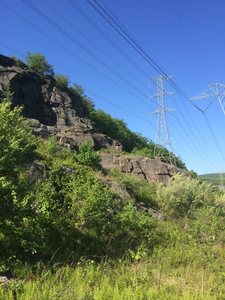 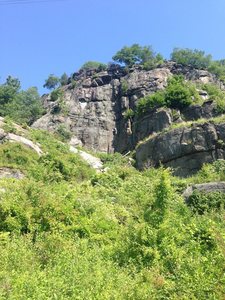