UNDER CONSTRUCTION, ROUTES WILL APPEAR FOR THE NORTH AND SOUTH WALL SOON

Bee Gorge is possibly the most developed, easily accessible crag in the Baihe Area. It seems to be composed of orange granite. It is the first major crag you encounter on the way into the long, complex gorge/mountain system that defines the area. It is the unmistakable, large gorge on the left side of the road early on when you enter the mountains. It has a North and South wall (developed and a west wall up the hillside that has, to my knowledge, not been developed). Although there has been significant development in the area, there remains a huge amount of route potential. The north and south walls on either side of the canyon have essentially been developed at the front of the canyon. Both walls extend further back and feature undeveloped lines that could be a combination of hard multipitch trad and Euro-style sport lines. If you are looking for an introduction to Beijing climbing, this crag is a solid start.

Oh, and did I mention this crag is also across the gorge from a section of the GREAT WALL OF CHINA?!

Bee Gorge offers an interesting opportunity in the realm of Greenpointing, which involves climbing sport routes on gear only. Because climbing is so new to China, relative to the United States, the ethics surrounding bolting have not really developed to levels that were seen in the US from the 70s-early 90s. Consequently, a lot of routes that could put up on gear instead receive sport bolts. Ergo, a new challenge lies in trad climbing some of these sport routes.

To be fair, there is a logical case to be made for the large-scale bolting in China. Climbing is so new to the country, and in a place where the ideas of the middle class, disposable incomes, and climbing equipment are fairly young, there are few homegrown Chinese climbers who can and will shell out the money for all the trappings of a modern trad rack. Trad gear is also fairly hard to come by in China, and what there is generally carries a significant price tag (Sanfo （三夫）, the Chinese version of REI, has pretty significant price inflation). Essentially, there is a strong motivation for a populist approach to Chinese climbing. There is so much rock in China that has not been touched by climbers, so why limit the number of Chinese climbers who want to enjoy the sport by exorbitant pay barriers for gear? The Chinese climbing community is one that needs to grow, and arguably the best way is to get more enthusiastic, homegrown Chinese climbers out there.

All of this being said, there is nonetheless a problem with over-bolting and gym-hold bolting in some areas. Stories I have gathered from some expat climbers border on the realm of absurd, involving rampant bolts, paint, chipping, retrobolting, and bolting gym holds onto rock. However, this page is not meant to be an indictment or validation for what is occurring in Chinas climbing community today. But it is an interesting and constantly changing debate that will be lively to follow as the sport matures in China.

In terms of credit for area development, a lot of the heavy lifting was shouldered by the Chinese Mountain Development Institute (CMDI) (terratribes.com)while the small handful of trad routes have been developed by some of the few homegrown Chinese trad climbers. Though the number of local trad climbers are few, hopefully these great routes will inspire other to pick up trad climbing.

NB on the Photos: All of the photos of climbing on-routes are my personal photos. However, the photos of the general cliff band on each side of the canyon are ones I discovered through the climbing community out in China, put together by Red*Point. While I attempted to make my own cliff topos, I took different camera angles than the ones captured by Red*Point. I do not want to put out a badly rendered or inaccurate topo, so I wanted to make sure that the quality picture editing done by Red*Point receives a broader audience. Baihe is a great climbing location with easy access from Beijing, so I hope that items like these will encourage more climbers to go discover what the area has to offer.

From Beijing: Take the subway 2 line to Dongzhimen station. Head up from the subway topside to the "long-distance bus station" terminal. You are looking for the 980 EXPRESS（快） bus to Miyun; do NOT take the slow/local bus unless you want to double or even triple your travel time. You are looking for the "Gulou" stop once you get to Miyun. You will notice it will be a cabstand with a bunch of vans. Hire a van to take you to Bee Gorge (most drivers will know since its a significant destination for local climbers). The more people you have, the cheaper it will be (~80-120 RMB). Bee Gorge will be the first major crag you encounter on the left side of the road. It has a fairly large dirt parking area with a concrete dividing wall next to the road. 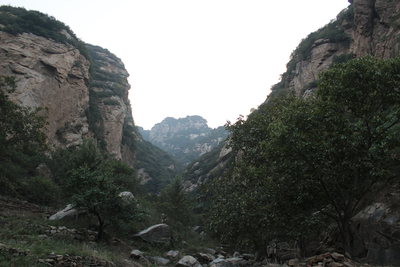 A look at the entrance of Bee Gorge from the di… 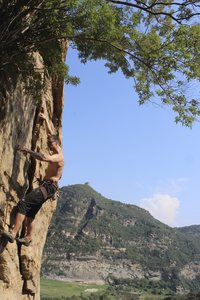 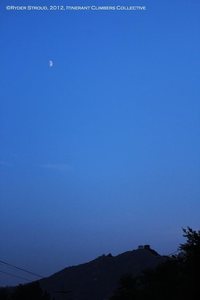 Twilight over some of the mountains in the area… 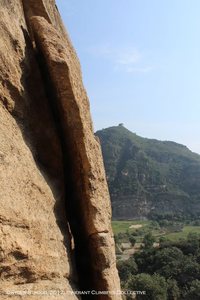 That little box on top of the mountain? Well, i… 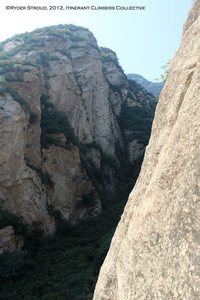 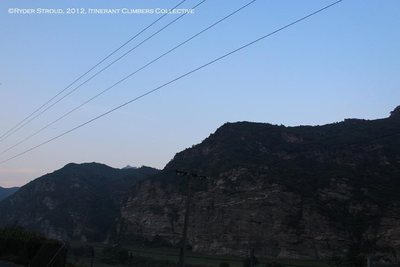 Some of the unclimbed cliffs across the road fr… 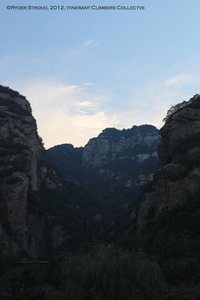 The entrance of Bee Gorge in the evening. The N…

All Photos Within Bee Gorge