Eagle Rocks is a vertical limestone fin jutting from the flanks of Cave Mountain. The Rocks are blessed with a plethora of cracks, aretes, dihedrals, and faces, vaguely reminiscent of Seneca in much the same way that the Tetons are reminiscent of breasts. The 10th Mountain Division climbed here, as had god-knows how many brave little naked red hunters and local sweethearts, exposed to the elements and subject at any time to any of a number of sudden, perhaps catastrophic geological changes. This formation is one of the icons of the canyon, and is located just 2.2 miles from the Route 220 intersection on the south end of the canyon. Opposite the campground entrance is the grave of William Eagle, Revolutionary War hero and local legend.

The Rocks are covered with semi-detached flakes, stacks of loose stone, precariously-balanced blocks the size of stoves. Trees, debris, and indeed entire large portions of the numerous faces can and will fall off without provocation or warning. Apparently-solid rock can suddenly fracture and plunge earthward, taking you with it and sucking your belayer right through the first quickdraw. Massive sections of the talus slope below can shift or collapse without warning, including sections which have until then been stable for years, centuries even. Trails were established by whitetail deer, black bear, local climbers and other unstable forms of indigenous life, and cannot be counted on not to hurl you to a painful and untimely death or even to get you to the crag and back again without winding up like the Donner party.

Venomous snakes, stinging insects, biting animals, and vicious plants can and likely will attack you for absolutely no discernible reason, at any time, anywhere. Being outside is a risky business, and you probably shouldn't do it if you are unwilling or unable to accept those risks as your own responsibility.

Climbing Eagle Rocks is especially dangerous, for the reasons noted above and many, many more. The face is spotted with old pins and ring angles left behind by soldiers before the Second World War, some of them psychotic killers, many of them unstable young men terrified by the enormous exposure and pushed to the limits of sanity by bad food, homesickness, venereal disease contracted from local girls, abuse from overbearing homophobic drill instructors and the challenge of trying to follow driving instructions from the locals. Almost all of them arrived and departed equally inexperienced in the placement of protection (thus the venereal diseases). A few, like Fred Becky, went west and figured it out way up in Leavenworth, WA or out in the Sierras.

More modern gear like rappel anchors, face bolts, and cold shuts may have been and likely was installed by drug-addled, brain-damaged trad climbers with a pathological resentment of gymbies and newcomers, deeply-seated antisocial issues, no sense of personal safety or respect for the sanctity of human life, and an addiction to Yuengling Black and Tan.

(Of course the author has no personal knowledge of this possibility.)

No anchor, bolt, piton or ring angle should be trusted to save your life. Of course, removing these items, as well as found biners, gear laying on ledges or left in cracks and pockets or anything else that you didn't bring with you constitutes reckless endangerment, vandalism, destruction of private property, and theft and the landowners as well as the NFS will likely prosecute to the fullest extent of the law.

Don't steal our stuff. Not our hardware, not our beta, not our projects, and not our gear. Lynching is socially embarrassing, and prison is a bad place, worse even than Eagle Rocks, and you don't want to go there. The coffee is horrible, there's no Net Flix, and room service is something you really don't want.

There is no real record of who first climbed the trad and aid lines of Eagle Rocks. Every first ascent is a theoretical first ascent in an area so devoid of shared knowledge and so commonly visited by strong climbers in the early days of climbing.

Route descriptions begin with the West End (the left side of the front, in other words)

From Franklin, drive north on Route 220 to Upper Tract. Just past Upper Tract, turn left on Smoke Hole Road, and follow for 2.2 miles, to a grave and historic sign for "William Eagle" on the left. Turn right into the sharp curve of the driveway (or go on past, turn around, and come back)and either park at the end of the drive or pull down into the field below the first campers and cross the river to the obvious 300-foot tall rock. 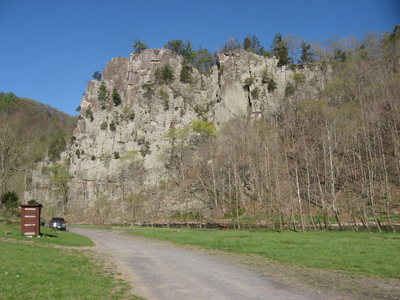 Overview of the sunny faces of Eagle Rocks.

All Photos Within Eagle Rock