The Pembrokeshire coast is a mecca for sea cliff climbing, with more recorded routes now than the whole of Snowdonia!  There is an endless playground of mostly single pitch trad, as well as a large amount of deep water soloing that is still being actively developed.

The area is split here by the divisions in the current series of definitive guidebooks by the Climbers Club:
1. North Pembroke
2. Range West
3. Range East (Stack Rocks to Hollow Caves Bay)
4. Range East (Saddle Head to St. Govans)
5. Stackpole and Lydstep
with further subdivisions within each of these areas.

The vast majority of the climbs here are tidal sea cliffs, and the Bristol channel has a notoriously large tidal range (second in the word!), so it is imperative to check the tide tables when planning a visit.

North Pembroke
While less appreciated than the limestone cliffs of South Pembroke, North Pembroke provides a healthy diversity of climbing spread over a bit wider of an area. The sandstone slabs south of St. David's are a highlight and well worth the detour.

Range West & East
With enough routes to fill three guidebook volumes on the 6 miles of cliff along the army range, this has to be one the best concentrations of single pitch trad anywhere, with crags as far as the eye can see up and down the coast. Limestone cliffs provide great climbing with good range of style. Rusting tanks and signs warning of unexploded ordinance landward from the cliffs remind you that this is an Army Live Firing range, and you should make sure to only show up when the range isn't in use. Generally this results in weekday restrictions on many crags, but consult the BMC's Regional Access Database for details.

Stackpole & Lydstep
Mowingword, Stackpole Head and Mother Carey’s Kitchen are the highlights of this area, with a good handful of other crags here, all a little more disconnected than those of the Range. Nonetheless, they are well worth the visit and feature some of the most classic and intimidating lines of Pembroke.

The M4 is the main access to South Wales from England. When that runs out, continue along A roads, depending on which area you intend to visit.

Commonly, routes and abseils will utilize permanent stakes in the turf as their anchors.  Inspect before blindly trusting them, though ones in popular areas like St Govan's are most likely sound.  Maybe utilize two if possible.

For the limestone climbs in South Pembroke, expect to place a whole lot of wires.  It's not unheard of for climbers to rack triple sets of wires, even quads on the middle sizes. A set of cams is still useful, just be careful in your placements on limestone. The irregular rock is generally friendly to tricams and hexes, which often will sit better than cams (though are not strictly essential).

Many routes will have a lot of opportunities to place threads, so make sure to have some slings.  Some routes have pre-tied threads you can clip, though it is worth giving them a good look before trusting your life to them.

Pitons are rare and any that are left should be regarded with suspicion in the salty environment.

This isn't the Peak, you'll actually need most of your rope to get up here, so bring enough draws to protect wire-heavy 35m routes

For the sandstone slabs by St David's, microwires and small cams are highly recommended.  These are similarly useful for some of the hard routes in South Pembroke.

The Climbers' Club produces the definitive collection of guides for the area, split into 5 volumes. They also have a single selected guidebook made with Wired Climbs.

Rockfax has a fairly good selected coverage for Pembroke available on its app, as well as a less comprehensive book from 2009. 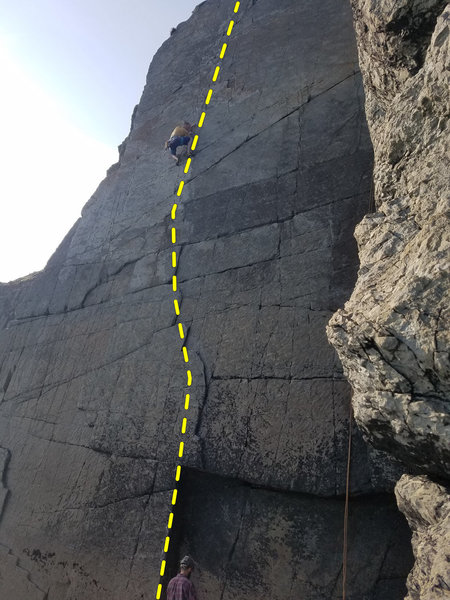