One of the longest contiguous cliffs on Crane and one of the first to draw attention of climbers willing to tackle the approach. The Slanting Cracks Wall is 320' at its tallest, begins as a steep slab which undulates between 60 and 80 degrees before rounding over to easy slab near the top.

Named for the obvious crack lines that run from lower left to upper right, the wall is very wide at the top, but narrows toward the bottom, somewhat like a funnel. In fact, climbers should be aware that anything dropped from anywhere up on the main face tends to end up at the bottom of this funnel, near the start of Providence. This is particularly important during winter ascents, when ice and spindrift frequently come down.

The wall diminishes in height quickly to the right of Providence, but continues several hundred yards before tapering off completely.
Note that many parts of this wall are currently in pretty rough shape. Since the development of the BAW, it has seen little traffic outside of winter ascents.

Historically, the Main Face of the SCW was the most popular climbing on Crane for the 1990s and halfway through the 2000s. There was no East Path then; much of the now-popular climbing on Crane was too far off the hiking trail, too far from my house, to get to. With a 50 minute approach from home and an impressive height, I gravitated here. The on-sight, ground-up ethic kept progress to a minimum; but in the mid-90s, Michael Emelianoff pointed out the potential with the first (and for over a decade, only) top-down, all-bolted sport route on Crane, on SCW's right tapering end: Fifi Fingers.

Stared at for decades, the left side of the Slanting Cracks Wall defied development for a long time. The cracks are excruciatingly dirty, the faces between them overhanging and devoid of natural pro. In 2016, Jim Lawyer and David Buzzeli descended on the Underworld and finally established some routes. And what routes; several 5.12s and Crane's first 5.13! Development of even harder routes is possible in this vicinity, though it will take determined effort from fit explorers to do. There is, for example, that namesake Underworld Roof to free up...

Either rappelling from above or walking. Rappelling is recommended.

Walking: take the East Path to the Isobuttress, walk downhill between the Underworld cliff and the landslide area below the Pinnacle Overlook block. Keep the Underworld Cliff on your left as you descend and turn northward, then work carefully along to the gigantic left-facing corner where Providence begins.

To rappel, walk the East Path past the BAW for 200 yards. Look for an oak tree with a rappel anchor about 20 yards off the trail. A 100' rappel leads to the Providence belay ledge. Walk skier's right to a pine tree and rappel down the outer face (NOT into the Providence corner) to a large white pine and rappel again, this time in whichever direction gets you to the climb you are looking for. 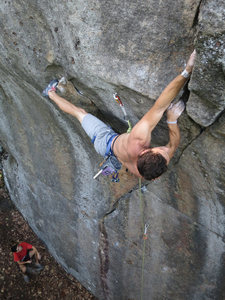 Making the crux moves right to gain the finishi…

All Photos Within Slanting Cracks Wall