Dardago is a small suburb (frazioni) of the larger municipality of Budoia, which is a comune (municipality) in the Province of Pordenone at the foot of the Dolomites mountain range about 13 km northwest of Pordenone.

Dardago is an adorable rural Italian township, with spectacular views of the Dolomite foothills and a picturesque central square (piazza) with a handful of pizzerias and restaurants. There are also three small restaurants on the road heading to the crag with incredible views of the valley and an American/Italian Air Force Base called Aviano AB.

There are three sport climbing crags. The biggest one is called 'La Palestra Roccia Grande' (big rock gym) and the two smaller are collectively known as 'La Palestra Roccia Piccola' (small rock gym). All crags are limestone, but variety of rock varies from great quality to chossy depending on the area of the crag. All parts are well bolted and a majority of routes have two chains with a biner for anchors. Aside from a handful of routes, you will only find single pitch routes at Dardago.

For better or for worse, the Italians mark on the rock the name of the route and there is also a stand with names of routes with their associated difficulty grade (in the French grades of course). Crag is steep and overhung in many sections with a handful of easy routes in the IV-V range, a lot of routes in the 6-7 range and hardest routes topping out at 8b (YDS 5.13b).

Once you drive into the small town of Dardago, continue going uphill. All roads converge as you increase elevation. Eventually you will park outside a small restaurant (the one past another restaurant called 'Il Rifugio'. and hike down the small gated road on the right to a small chapel called San Tome. From there, follow the signs and trail to the large wall up and left, or the two smaller crags up and right. 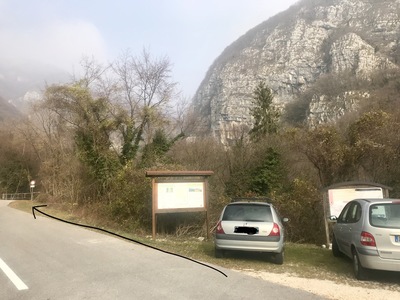 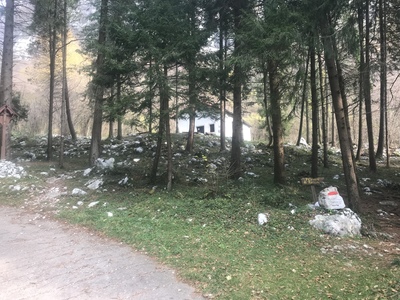 Chapel San Tome. Sign on the right pointing to… 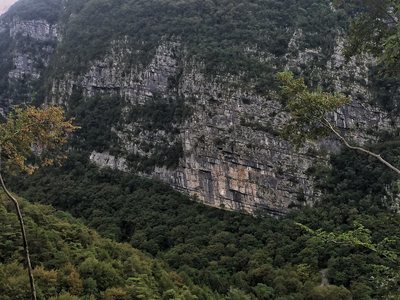 The main area of Dardago as seen from across th…