The cliff band upstream on the Truckee from the vastly more popular River Rock [See River Rock description for directions from the Highway]. Despite the relatively short distance for approach, the game trails and scrambling involved will definitely up the adventure quotient while decreasing the crowd factor.Cracks, face climbing, leads, and toprope options exist.slk suggested this is called the "Ron Anderson Memorial Crag."I've also seen it called River Rock's Upstream Crag / Cliff.

Approach either from the dirt road and then up and over the cliff bands from the River Rock side, or cross at the end of the bridge (heading towards River Rock), follow faint game trails and bushwhack, generally trending above cliffs while not venturing too high.

A gully on the west side of the crag provides access to climbs on that side (i.e. Fuck Me), and includes 4th, low 5th class downclimbing and a bit of routefinding. Conversely, approaching from below the first upstream cliff from down a steep slope and then accessing a short four rung via ferrata will gain the same spot.

Alternatively, a set of waders or just wading and crossing the river (using best judgement) would be the shortest approach, although you'll have to choose your landing spot. 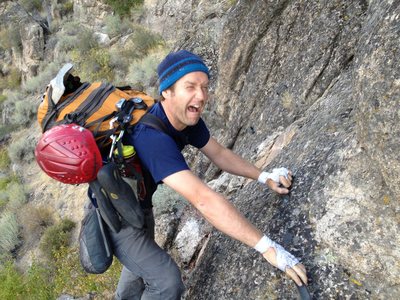 An inexperienced climber about to fall off of t…

All Photos Within Ron Anderson Memorial Crag (aka Upstream Crag)