Fenghuangling (Phoenix Mountain Nature Park) sits in the Northwest part of Beijing. A plethora of granite blocks scatter the mountainside. Some traditional climbing has been established, and limited information can found with a little scouring of the web.There are potentially many bouldering areas to be discovered. The landscape rarely offers safe landings, but the top of the mountain in the north seems to have another huge potential area from what I can see on google maps satellite view. The adventurous could very well find an area with a lifetime worth of problems. The area weve been developing has about a years worth of climbing.
Over a period of six weeks in July and August of 2012, a group of climbers residing in Beijing at the time began developing a couple of sectors in one area along the North Route of the park. (I would like to thank gifted Polish climber Ola Przybysz for telling me about the potential in the area, and salvaging my time in Beijing.)

Access and ethics- Access has not been secured formally to climb at Fenghuangling. It is quite common for Chinese people to die here falling off cliffs, or get lost and need to be rescued. Keep in mind these are people who mostly reside in a city, and little outdoors awareness. Also, the standard of what westerners may consider common sense regarding safety tends to be WAY different in China. There are signs all over the place prohibiting, fire, climbing, and going to areas the authorities believe will result in injury, death, or rescue. However, they are commonly ignored, and when I enquired about the seriousness of these warnings and potential consequences not heeding them, I was told, If you need to get rescued, its your fault, and youll have to pay for it. If you die, that sign means its not their fault. So, if boulderers maintain an image as a polite, safe, profitable user group, access should not be an issue. That being said, beware of excessive cleaning on boulders in direct view of the general public, and please dont go chopping trees down and things of that sort. The locals seem to be quite fond of the group of us who started developing this area. They've greeted us with friendly smiles and kindness. It goes without saying that they like the money any tourists bring. The general public is interested in climbing, and will often stop to watch. Weve tried to maintain LNT ethics, and pick up at least some of the locals trash each outing. There is a huge user group of people who have a very different understanding of how we should treat the outdoors from westerners. A polite nudge in the direction of a LNT standard couldnt hurt.

Stay-
Phoenix Hills Commune, 1062481229 (Really nice accommodations ranging from 300 to 500 RMB. Amazing, organic, vegetarian food. Friendly service.)
Also, there are a few rest/hotel places on the south side of the mountain of average Chinese quality. A Chinese speaker can you get you there via the big, green golf carts.

Then;
Take one of the large, green golf cart like shuttles to the North Gate (10 RMB), or walk straight for about 100 feet, and turn right and follow the road less than a mile to the North Gate. 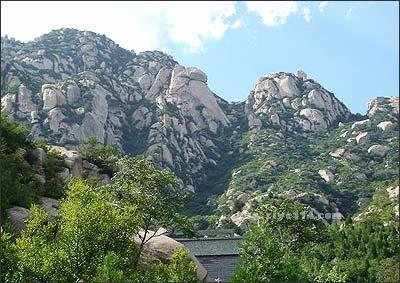