This is a short, west-facing wall high on the Strone Crag/Standard Ridge escarpment. It is shaded until mid-day, then cooks the remainder. Developed by (you guessed it) the Ruckman brothers, the wall was named for a very successful Canadian rock band (now up to 24 gold and 14 platinum records, according to Wikipedia), and most of its route names have a Rush theme.

The most straightforward approach begins on the trail heading to west face of Challenge Buttress. Once under the west face, cut across the boulder and scree gully just west (downcanyon) and catch an indistinct (comes and goes) trail up the west side of the gully. Continue until able to climb through an obvious notch (looks like a window, formed by a lodged boulder). As you approach the notch, just before it, you may notice a few bolts on an arete just to the left -- this has been posted as the Notch Arete on the Lonely Challenge Area page. If you miss the the notch and continue up the boulders and scree, you'll eventually end up under The Slab, Watermelon Tetris, and their neighbors on Lonely Challenge Wall.

From the notch, fourth class up and toward the south until possible to gain a broken ledge under a slightly overhanging face with an obvious left to right diagonalling crack (La Villa Stangiato). It may help to use the overview map in the Ruckmans' 1998 guide. Plan for at least 15 minutes, some rock tottering, and heavy breathing for the approach.

It's also possible and maybe more enjoyable to access the Rush Wall by climbing Standard Ridge, which would take you into the notch mentioned above, or climbing one of the newer routes on the northwest face of Strone Crag (e.g., Starstruck) and continuing up fourth class rock to the wall. 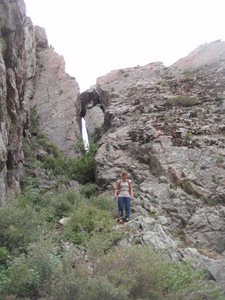 the hole in the standard ridge to gain access t… 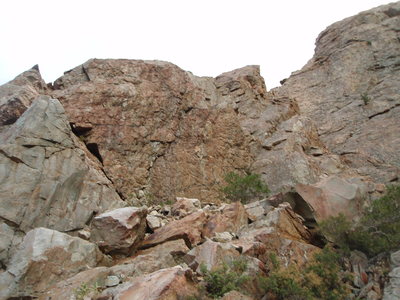 All Photos Within Rush Wall