The Upper South Corner Cliffs sit high on the South East flank of Crane, and have become quite developed since 2013. The various outcrops on the cliff now have different designations to help people find and figure out where they are. Where previously only adventurous, "alpine-style" routes wandered, there are now clusters of well-defined, lovingly scrubbed routes. A herd path branches off the East Path near the Height-of-Land Wall to reach the most popular crags up here.

Of particular note, the Jammer Wall has the highest concentration of established and well-cleaned routes, currently 13 and counting. These range from 30' to 70' tall; from 5.2 to 5.11a. It is quick to dry, receives a lot of sunshine well into the afternoon, and boasts some of the finest collection of cracks on the mountain.

Above the Jammer Wall lies another 80' cliff, which is steeper and less developed. Animal Charm, 5.10c, is the route of note on it, though the Gray-Harrison, and one of its variation pitches, also runs up it.

The Upper South Corner extends from above the Land of the Overhangs to above the Long Play Wall.

Above these walls lies an extensive series of small, very dirty cliffs interspersed with sloping, thickly vegetated ledges. Ice builds up in corners, under overhangs, and among the trees over the winter and creates very real danger to anyone climbing on the cliffs below as the ice itself loses cohesion and falls down, or lifts and destabilizes rocks in the shallow soils on the slabs so that they slide off.
Twice, friends and I have seen icefalls, with chunks the size of refrigerators, crash down from 200'+ above and rip up the terrace at the base of First Amendment. Anyone standing there, anyone on the route, would have been killed. I have witnessed large blocks of rock come silently hurtling into the trees of the Jammer Wall ledge as we climbed there; once a twenty pound block came silently out of nowhere to crash into the branches of an unlucky oak tree I was leaning against. It missed me by about 3 meters; it flew through the air about 2 meters from my buddy, who was on lead on Stand Your Ground at the time. Again, certain death had it whacked a head, helmet or no.
While the odds are slim that you will get the axe this way, it's certainly a gamble, not a sure bet for your safety. I strongly suggest staying off the Amendment Wall routes until it is certain the ice is gone (the first time we saw an icefall there was in early May!). I feel the Jammer Wall is safe enough, but never forget that much of Crane Mountain is really alpine-like in character.

what an awesome place to belay! 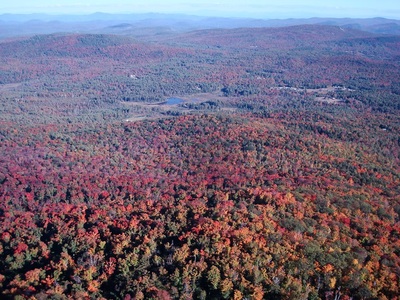 Autumn View from the Upper Walls 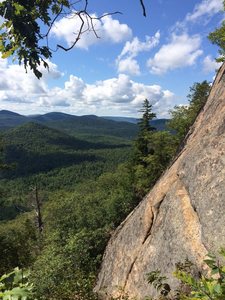 View from the Belay of Stand Your Ground and Ac… 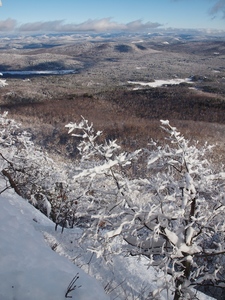 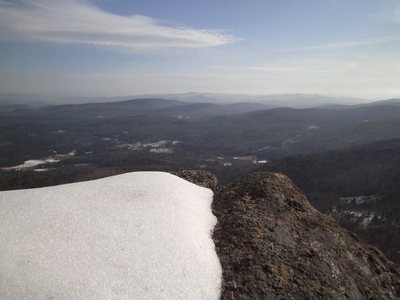 High on the South Corner on a winter adventure…