Rio is hands down the WORLDS BEST URBAN CLIMBING DESTINATION. The city itself hosts thousands of excellent routes covering a huge range of sizes, styles, and difficulties. Nowhere else can you climb a 2000 foot granite big wall overlooking a bustling city of over 10 million people. Whether you are passing through for a couple of days, or planning to make Rio your home, there is tons of climbing to choose from all year around.

The climbing in Rio has a very unique style. The rock is almost exclusively granite, and is usually very solid. Because of the climate, however, the rock is largely free of the cracks characteristic of the majority of the worlds large granite formations. The result is that Brasilian climbing on the bigger formations is mostly bolt protected face moves and is very technical. While there is sport climbing in Rio, the bigger routes are not bolted like your average sport crag. Most of them were established ground-up decades ago and are very committing, especially on the more slabby terrain. It is worth your time to get a feel for the climbing before diving into something that is at your limit. The climbing is unbelievably fun and exciting.

You can climb in Rio 12 months per year, although the winter (May-September) is the best season. The summer months are not only warmer, but also wetter, while the winter temperatures are perfect, and the climate is drier.

The physical center of the climbing community in Rio is a place called the Urca. It is a small national park that contains the famous Pao de Acucar (Sugarloaf) as well as a smaller sister formation called the Urca, and another face called Babilonia. Here you can find long trad lines, single pitch sport routes, bouldering, and everything in between. Access is easy by bus or car, and there are always climbers around. If you choose wisely, you can climb comfortably in the sun or shade (depending on the season), all year around. No matter what your climbing level, there is a route at the Urca that will suit you well.

While the Urca has the highest concentration of easily accessible climbing, just about every granite formation in the city has been developed. The Corcovado, home of the Christ statue, has many routes ranging from 5.8 to 5.13 to A4, and up to 2000 feet tall. Some of the smaller moderates are well traveled, while the bigger walls see fewer ascents, but are of equally high quality. Pedra da Gavea on the west side of the city (where the hang gliders launch) has many different routes on all of its different faces, as well as stellar sport climbing at its base. In addition to these bigger formations there are also a bunch of sport crags, called falesias in Portuguese, scattered throughout the city. Most of the single pitch sport climbing is fairly difficult but also of very high quality.

Within a couple hours drive from Rio there are thousands more routes on various formations and crags. North-east of the city is Teresopolis, and Novo Friburgo, where you can find even bigger granite formations as well as a large climbing community.

There are two main guidebooks to the climbing in Rio, both by Flavio Daflon and Delson de Queiroz:

Urca covers all of the formations and boulders in the Urca National Park.

Floresta da Tijuca covers the Corcovado, Pico da Gavea, and several other formations and sport climbing areas in that lie in the Tijuca National Forest.

You can buy these books at various outdoor stores scattered around the city, including one just outside of the Urca National Park.

If you are just passing through Rio briefly, or want a good introduction to the ins and outs of the climbing, there are several guiding companies in the city. The only one I have any experience with is Ancoraue Tours (www.ancoraue.com). It is run by friendly local climbers who love showing people all that Rio has to offer, and speak English, Spanish, and Portuguese.

The city of Rio de Janeiro has a large international airport (Galeão, GIG) with direct flights from various countries, as well as a domestic airport (Santos Dumont, SDU). If you're coming from São Paulo, it can be either an hour flight or a 7 hour bus ride. Some areas, such as Itatiaia, are nearly midway between the cities of São Paulo and Rio.In the city of Rio it is possible to access a lot of the rock climbing by public bus, but with the exception of the Urca, it is not easy. Until you get very comfortable with the city, the language, and the climbing areas themselves, it is best to gain access by car or taxi.As far as entering the country, visas are often required, and MUST BE OBTAINED IN ADVANCE. 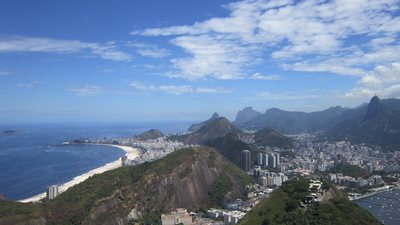 The view from the summit of the Pao de Acucar.… 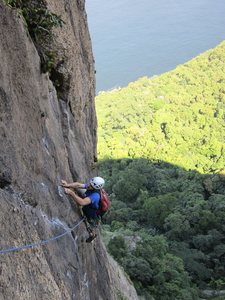 Coming out of the crux on Limiar da Locura on t… 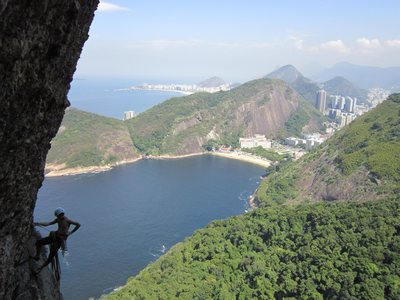 Climbing on the Totem, on Pao de Acucar (Sugarl… 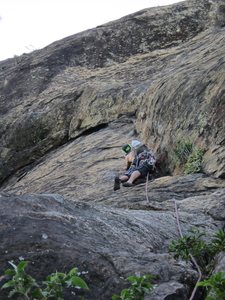 Looking up at the start of Cavalo Louco and Via… 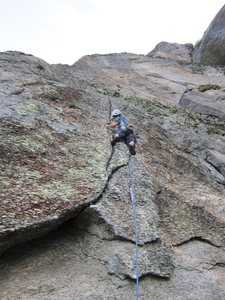 There are cracks in Rio, but you have to go fin… 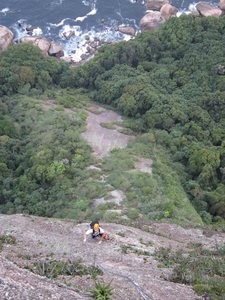 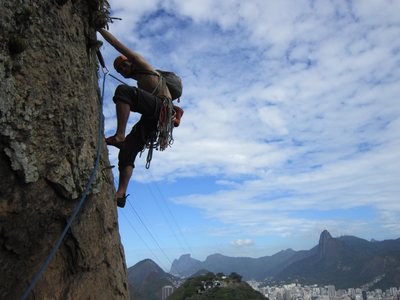 High on Waldo with Rio in the background. 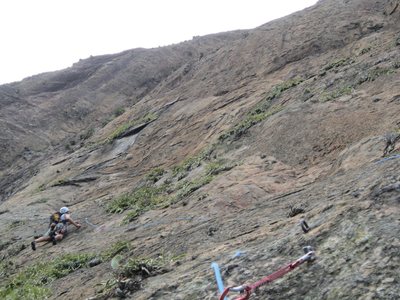 Andrew on the crux pitch of Waldo, on Sugarloaf.

All Photos Within Rio de Janeiro