[see James B's comment below, there is now apparently a guidebook available.]

NOTE:This description is vague because the information I have about the cliff is vague. If you're expecting SuperTopo-quality descriptions, you're gonna be very disappointed! Think ADVENTURE (only with new stainless bolts)! Also, it should rapidly become clear that I'm in no way local to this crag, and would welcome any local that would like to take over this entry and correct it.

Located in a suburb of Oaxaca City, this is pleasant crag with apparently around 70 routes.  Many of the bolts are non-stainless or with stainless hanger are vice-versa. They are beginning to rust but most appear in decent condition. Rebolting has been progressing on some of the older routes and many of the scary old hangars are gone.

The rock appears to be something igneous with a lot of pockets and big crystals. The rock is pretty solid: a bit of crumbling here and there on what I saw, which seemed to me appropriate for routes that I think have not seen a lot of traffic.

The cliff faces West-Southwest. When we were there (March) the sun hit the cliff at about 11-1130am and you would not want to climb there after that. You can climb in the Piez Descalos area longer than many of the others because there tends to be more shade there. Most of the belays are shady but the climbing gets really hot during the day.

Apparently you can get off all the routes with a single 60m rope. The routes are generously bolted. You probably won't need more than 12 to 14 quickdraws for anything at the cliff.

There is a guidebook for the area, although its out of date and doesn't have all the routes, it does have plenty of them and will definitely get you near where you want to be. Its only 50 pesos and currently the only place to purchase is at Mondragon Gym. The gym is really near to the turnoff for San Sebastian Tutla. There are several other gyms in town, although the currently don't carry the small guidebook. Erikuas gym carries the larger, also out of date, Mexico guidebook.

There are few easy routes at the crag but Piez Descalzos is where you'll want to go for the easy stuff. After that everything gets steeper and more sustained. There are many 5.10s and several routes into 5.13.

The trail (see Getting There) deposits you at the left end of the cliff. At that point there is a little northwest-facing part of the wall with some routes that are in the 5.10 range.

Then, to the right of that second alcove is the main bulk of the wall.

If you are allergic to bee's then you'll want to bring an Epi pen with you. There are lots and lots of bees here and some routes climb next to nests or over them. The large wasps tend to be scary but for the most part will leave you alone. They live in some of the finger pockets, so beware. But the smaller bees tend to congregate in large numbers. Be wary of these, climb far away from them and if you get stung, head to the ground immediately and wait 20-30 minutes before climbing again.

1) From downtown Oaxaca head east out Carretera Internacional, which gets you into the town of San Sebastian Tutla, for about 10 minutes if there's no traffic. If you don't have a car a cab could get you out there for probably 70-90 pesos (less than $10). [EDIT: see James B's comment below about bus service.]

2) Keep an eye out on your left for Muro Mondragon, the climbing gym at 14 Carretera Internacional. The sign is a climbing mannequin on an overhanging wall.

3) About 150 feet past Muro Mondragon, there is a traffic light at Calzada Antonio de Leon. Turn RIGHT at Antonio de Leon and go about 200 feet to its end.

5) Go about 8 blocks through a little neighborhood and you'll come to Calle Ferrocarril, a big divided street. Go straight across, and Constitucion will turn to dirt on the other side of Ferrocarril.

6) Continue for about 1/2 mile (very approximate, we were walking) and you'll cross the river on a concrete bridge. Along here if you're looking up and southwest, you'll see some pretty big cliff bands, but the one you're going to is much smaller and you won't even notice it until you're pretty close.

8) At this point, you'll be at a group of three abandoned concrete buildings, the northern one is about the size of an outhouse, the next two progressively bigger. Some graffiti on the middle one says "Te Amamos Frida!" This is where the trail begins, going off uphill to the southeast. Just after the buildings (and the trail) the road becomes quite steep and loose, and if you've missed the buildings and are in a cab, the cabbie will probably get unhappy. Also next to the uphill, on the Left, is a small pond/lake.

9) Follow the trail uphill to the southeast for about 3-4 minutes, and you'll be at the base of the left-hand end of the wall. 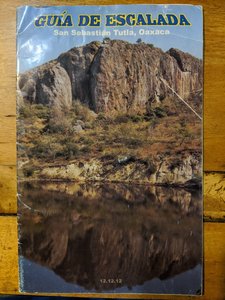 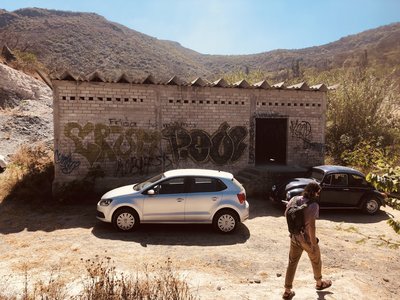 All Photos Within San Sebastian Tutla