Routes in The Edge

I contacted a friend who co-authored an old Stover guide with me, and he did have our Edge notes, and graciously organized and mailed them to me. There are 32 trad routes that were led ground up on gear and a few pins. Mel Hamel, Tom Moffatt and I ( Tom Stryker ), had our run of the place, and climbed the lines we could with the gear we had at the time.

As far as property, it was always my understanding that it was a part of the Bucks County park, but we sometimes had issues with parking on Cafferty Road, which was private.

Only four climbs had fixed gear at the time, between 1981 and 1983, two each in the area behind the Great Wall, one pin on Fruition and one on Thunder Road. In some cases small cams which were not available at the time may allow ascents of climbs where the pitons disappeared, but use some care, particularly on the Rotwand, as we were in deck territory every time we went out the the nose to work on getting some gear.

As I understand it, some routes have been bolted on the Great Wall. The most common center route on this wall has been led on gear at 5.8 X. We did some other routes that were pretty bold, and I am concerned these would get bolted unknowingly. If you are planning to bolt more routes there I would appreciate any opportunity to fill you in on existing trad routes there.

Buttresses and routes, from upstream to downstream.

Buttress 4 is short and has no routes.

I believe the best way to access the Edge is by parking at the Tohickon Valley Park lot. Go downstream from the pool. Initially you will pass a smaller gray cliff we did a few short routes on, then the Edge proper.

Classic Climbing Routes at The Edge

Mountain Project's determination of the classic, most popular, highest rated climbing routes in this area.
More Classic Climbs in The Edge » 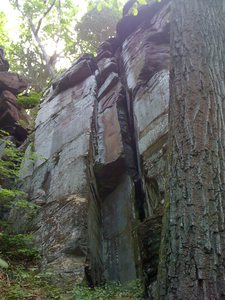 Cracks on an unknown wall at the Edge. 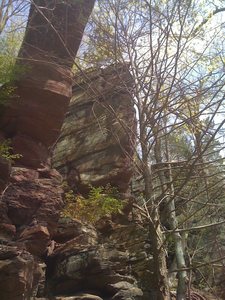 EB Phone Home on the back of the Great Wall, wi… 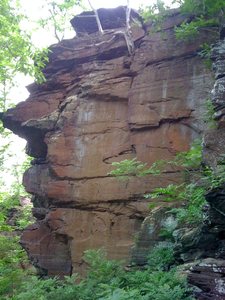 More About The Edge

All Photos Within The Edge