The Crimea peninsula is a stunning climbing destination, offering thousands of sport routes on limestome cliffs. There are dozens of crags on along the Black Sea coast and a couple noteworthy crags in central Crimea around Bakhchysarai. At many crags, there are too many routes in too small an area, however, it makes it simple to get a full day of climbing in while still having time for a swim in the Black Sea.

Fall is the best time to climb in Crimea, when the weather is moderate and the sea still warm. Spring is also a good time, but the sea is still cold through May. In Summer, you'll generally want to climb in shaded areas, plentiful options for this; and also there are enormous amounts of tourist in Crimea during the summer, so outside of the crags, expect crowds. Winter is tricky, but climbing is possible on south facing sunny cliffs. In winter the biggest issue is weather which will often be two weeks of sun followed by two weeks of clouds and rain. If there is snow in the mountains, some cliffs will be wet from the melt on warm days. The best winter crags are Simiez and Bakhchisarai.

Many accommodations options are available. Many crags offer enough space for tents at the base of cliffs and spring water is often available. A wide ranges of options exist of pay also, from huts fit for a large group to single rooms for a pair, from cheap and humble to pricey and luxurious. Prices can usually be bartered down for stays longer than 3-5 days. Accommodations are priciest in summer and cheapest during the shoulder seasons. In winter, prices are not necessarily cheaper since many people don't accept guests in winter.

In Crimea, all roads lead to Simferopol, making it the obvious gateway to climbing in Crimea. Trains go to Simferopol from most major cities in Ukraine, including Kiev, Lvov, Odessa and Kharkov. From Simferpol, you can ride the longest trolleybus in the world, take a bus or taxi to the coast. Traveling from crag to crag is simple thanks to the numerous buses that cruise along the coast. Bakhchysarai is best approached on train from Simferpol or Sevastopol. 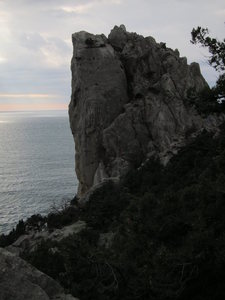 All Photos Within Crimea