Access Issue: This cliffs is insured by the FQME Details

This cliffs is under the liability insurance of the Fédération Québécoise de la Montagne et de l'Escalade (FQME).

This money is used to pay the liability insurance for landowners regardless if they are private citizens, municipal or provincial.
The maintenance of cliffs and their access, replacing of fixed protection.
fqme.qc.ca

Montagne du Tranchant is clearly the most popular cliff in Lanaudière.
It's located on public lands managed by the city of St-Come, the Club d'Escalade de Lanaudière (CEL) and the FQME. The city is fairly open to climbers, they've created a parking lot, installed a dry toilet and clear out the snow from the lot for us ice-climbers. So please encourage the local economy to thank them!

The cliff faces south west and can dry fairly quickly after a rainy day.
Many routes are very steep faces with remarkably positively holds.

-DO NOT LEAVE CHILDREN OR ANIMALS NEAR THE BASE, there is regular rock fall especially in the spring but it happens all the time. Wear a helmet even if you're not climbing.
-Due to the exfoliation of the rock, most routes are sport routes or mixed.
-Stick-Clipping is highly encouraged, many routes have been equipped with this in mind.
-Most belays and anchors are bolted, to lessen premature wear and tear, no lowering or top-roping off the bolts and chains.
-Don't climb on routes clearly indicated as being a project or red-taped, this is extremely dangerous.
-There's no garbage cans on the site so please pack it out.
-Please refrain from starting fires and camping on the neighbours lot.

The cliff is located between the city of Notre-Dame-de-la-Merci and St-Comes in Lanaudière.

Jean-Claude Néolet discovered the cliff in 2003 and started putting up some routes, during the winter of 2004 the ice-climbing potential was also discovered. Following the publication of a regional guidebook in 2004 and the creation of the CEL in April 2005 the site gained even more popularity. In 2008-2009, mostly thanks to independent openers, the amount and range of routes ballooned to nearly 40 routes from 5.3 to 5.13. 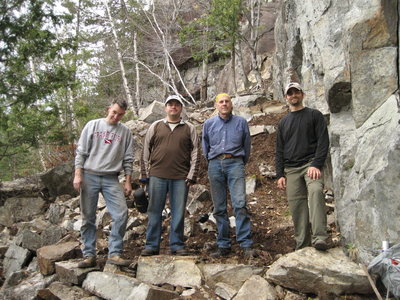 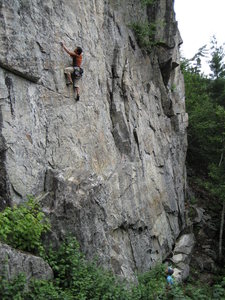 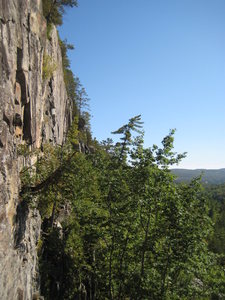 Side view of Tranchant

All Photos Within Montagne du Tranchant