Since the last guidebook to include this area was published, much of the land has been designated as wilderness and crags that used to be virtual drive-ups now involve a long hike to approach. These include Heller Rocks and Easter Wall on Owens Ridge.

Driving North on Highway 395 north of Ridgecrest, the first big steep granite you see to the west is a sneak preview of the huge northeast face of Owens Ridge. Behind this ridge is Indian Wells Canyon. Rock II on Owens Ridge as seen from Middle Saddle

Now frequented mainly by folks walking to the summit of Owens Peak, this quiet area was once the site of many long moderate routes on the north and south faces of Owens Ridge, hard sport climbs on Easter Wall on the south face of Owens Ridge, and across the valley to the south, a number of easy and moderate single-pitch climbs on Heller Rocks. These obscure routes were developed in the sixties and seventies, then another round of development (harder climbs on thin edges) occurred in the mid-eighties. Across the valley to the north of Heller Rocks are the Five Fingers, a beautiful ridge line high above the valley. From appearances, the area is all but forgotten, and it is unlikely that many routes see a single ascent in the course of the year, despite some of the routes being well over 1,000 feet long and in the 5.5-5.7 range. Brutal approaches and poor rock quality explain this, but the setting is still tremendous, making the area at least worth one visit.

The elevation here is low, relative to other sierra destinations, so summer climbing here is not recommended. The rock quality is generally poor. There are pockets of rock that are of a reasonable quality, something on par with Indian Cove at Joshua Tree. The majority of the rock is rotten, decomposing granite, making even "easy" climbs a real adventure.

The North Face of Owens Ridge, as seen from just off Hwy 395. Access to this face is achieved by climbing the South Face and dropping down from one of the notches and saddles.

The land is managed by the BLM and while no permits are required, don't expect to be able to drive where the old Sally Moser guide tells you you can go. Many of the old roads are closed.

Driving west on Indian Wells Canyon Road, you quickly cross the LA Aqueduct, and continuing west (and staying generally to the right, but following the clearly most-traveled road) you eventually come to a parking area for the Owens Peak trail. The road and parking area are well-maintained and accessible in any vehicle, though four-wheel drive or at least high-clearance is called for if you intend to drive up to the Five Fingers or other sideline crags in the canyon. Roads on the north side of the canyon are still open east of the Owens Peak parking area. Roads south of the canyon bottom and west of the LA Aqueduct are closed due to the 1994 designation of the area as the southern portion of the Owens Peak Wilderness. This includes the old road to Heller Rocks.

The GPS location included here (35.715503, -117.9742) is at the parking area for Owens Peak, which is near a huge chossy rock formation which makes for a fantastic campsite. This is where you will want to park/camp for climbs on Owens Ridge.

The South Face of Owens Ridge as seen from near… 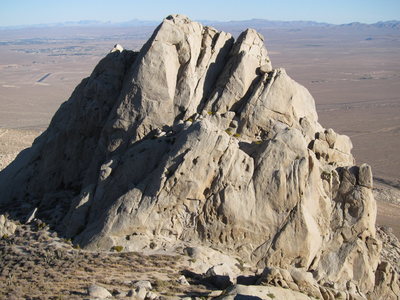 Looking east at the First Finger from the Secon… 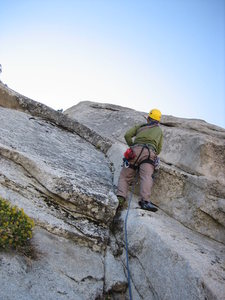 Climbing El Centro on the North Face of Owens R… 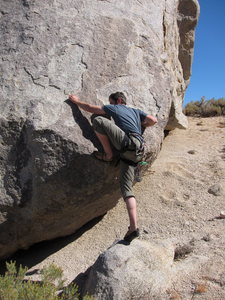 Bunch-of-Dudes boulder at the Breakfast Crags 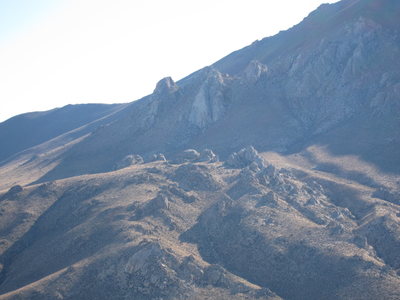 Heller Rocks (the small formations in a row nea… 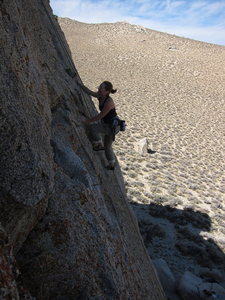 Climbing Grape Nuts at the Green Eggs and Ham Crag 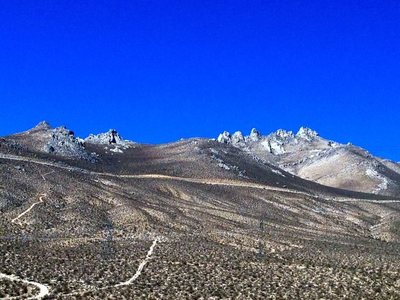 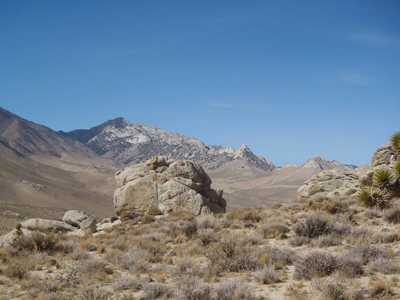 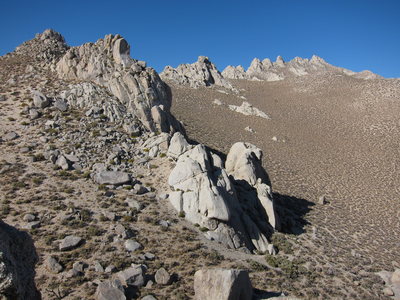 The Schnoz and The Mitten, as seen from the sum… 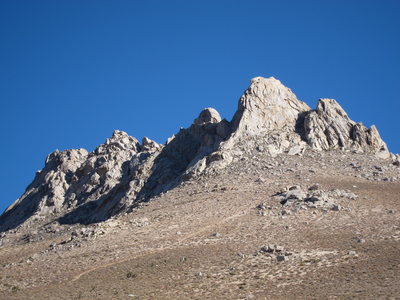 The Five Fingers, on the north rim of Indian We…

All Photos Within Indian Wells Canyon