The right hand side of the Main Wall (Pink Wall area) is closed between 1st March and 30th June most years due to nesting peregrine falcons. Check the BMC regional access databasethebmc.co.uk/modules/RAD/ for details.

The ultimate urban crag, steeped in history and adventure: few other cities can boast such a climbing asset! It really is in the heart of Bristol, a short walk from the centre, cliffs dropping from the open parkland of the Downs to the river Avon below. The city is invisible from the climbs, but unfortunately the A4 is not.

Love it or hate it, this is the reality of urban climbing: you pay for the convenience with traffic noise and communication difficulties (except for the few days every year that they close the road).

Delicate, technical and bold characterises the climbing at Avon gorge. It's a common complaint that "all the holds face the wrong way", and talk of "typical Avon weirdness" is not uncommon. True, it does take a bit of getting used to, but once you do it flows. There is a paucity of strong, natural lines on the quarried limestone faces of the gorge, and a lot of the routes follow much more subtle features: difficult to pick out from the ground but making perfect sense once you're up there.

The rock is quarried limestone, mainly sound but care must always be taken. It seems that no amount of time or number of ascents will rid the walls entirely of their loose holds. A strong trad ethic presides, and bolts are few and far between. Old, rusting pitons provide the sole protection (psychological or otherwise) on many of the routes, and the current like-for-like fixed gear policy ensures that they are never going to be replaced by bolts. While there is a movement to replace the mankiest pitons with shiny new stainless steel ones, this has not been exhaustive, and many routes (particularly in higher grades) are still dependent on rusty pegs in possibly rotten rock. Always exhibit strong caution, particularly on the Main Wall. Pitons in the Gorge have been known to pull and break under load, and even have their entire placement fall away.

Walking:
15 minutes from the city centre, across Clifton and the Downs. There are footpaths/roads running across the top of the cliff and climbers paths descending at various points. Once at the bottom of the cliffs, no area is more than 15 minutes walk from any other

Driving:
There is a small parking area just off the A4 at the base of the Sea Walls, maybe accommodating 15-20 vehicles. This is a busy road so it is easier to pull in if approaching from the North West. Other, even smaller areas can be found at various points on the A4, all on the same side of the road. Alternative parking can be found at the top of the cliff on Circular Road, though parking restrictions apply at most times. Use any of the climbers paths to descend from here.

The latter two are only select guides, good for a short term visitor looking to hop on some Avon classics.

The former is both definitive and up to date (well, to 2017), and has clear route descriptions and topos, unlike the old Avon & Cheddar guide.

Unknown Area/Sea Walls
All quarried, and catch the sun well.  Enjoy ice cream on the Downs from the ever-present Van.

At the far west of the Gorge, the Unknown Wall and Exploding Galaxy Wall provide multi pitch routes on fairly vertical rock (of admittedly variable quality).  Classics are said to be The Blik (E3) & Unknown Wall (VS) on the former wall and Yellow Edge (E3) & Amanita Muscarina (E4) on the latter.

The giant ramp has excellent single pitch affairs heading up its ground level (The Unknown Buttress) and from the ramp upward (The Upper Wall/The Ramp).  Good routes on the Unknown Buttress include New Horizons (E3), M1/M2 (E1), and Ladder of Desire (E3). The Ramp has a good collection of steep crack and face climbs, with Them (E3), Arms Race (E4), and Low Profile (E5) holding high regard. These two areas are some of the best and most solid climbing in the Gorge.

The Sea Walls itself holds many multipitch routes, including some of the easiest routes in the Gorge. Expect runouts. Morpheus (HVD), Nightmare (S), and Sleepwalk (S) all provide easy polished lines to the top.  Gronk (VS) is a well recommended adventure. Ffoeg's Folly (E2), Last Slip (E3), and Fast Grip (E2) all give thorougly bold Avon experiences at a higher grade.

The New Quarry has largely been given over to sport climbing and holds a number of (fairly polished) bolted lines.

The Main Wall holds many high grade classics.  Expect poor protection, and the occasional vegetation and loose rock.  The classic Malbogies (HVS) provides an impressive line of weakness up the middle of the wall.

The Morning Slab holds a number of decent routes from VD to E2, as well as some entertaining aid lines up the blank roof to the left, and brings access to the Evening Wall. The Evening Wall gets you to the top via a selection of routes from D to VS, with the arboreal start to Petros (VS) being a highlight.

The Central Buttress holds climbs in the VS to E1 range, including Great Central Route (HVS) and the historic and horribly polished Piton Route (VS). To the right of this are a handful of lesser walls, of which Fir Tree Slab is the most notable.

Suspension Bridge Area/The Ampitheater
The quarried area to the left of the Suspension Bridge is collectively known as the Ampitheatre, and holds a number of minor subdivisions.  By far the most popular and worthwhile route here is Giant's Cave Buttress (VS) which is always sure to catch the admiration of others.

The Suspension Bridge Buttress's Main Face is easily the best section of rock in Avon Gorge.  It's unquarried, fairly well protected, and dense in worthwhile routes from HVS to E4.  Highlights include the Suspension Bridge Arete (HVS), the Earl of Perth (E1), and Hell Gates (HVS).

Leigh Woods
On the opposite side of the River Avon are a 5 quarries more recently developed for climbing.  These would be 'deep cuts' so to speak of Avon climbing, best suited for someone who has done all the Avon classics or who figures fighting ticks beats fighting the summer sun, as these crags tend to be well shaded, unlike the standard fare.  There is a mixture of trad and sport here. 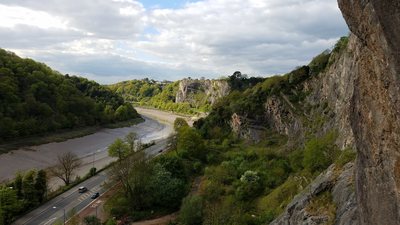 Looking out towards Unknown Buttress and Sea Wa… 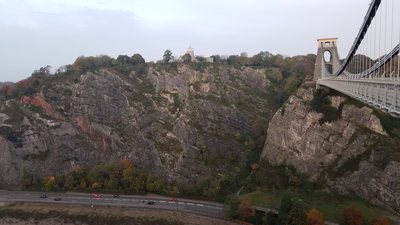 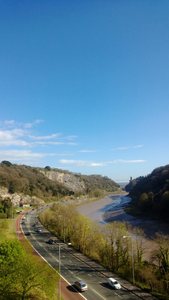 The view down Avon gorge from the ramp. Idyllic…

All Photos Within Avon Gorge