Little Slide Canyon is one of the major drainages of the Sawtooth Ridge. At the far end of the canyon are Maltby Lake and Ice Lake. From them, a stream flows down the canyon which then joins Robinson Creek and eventually Twin Lakes.

Among rock climbers, Little Slide Canyon is known for one thing - the Incredible Hulk. However, as you approach the canyon, long before the Hulk comes in to view, the many jagged spires on the west slope of the valley will likely be the first thing to catch your attention. They are smaller than the Hulk. They have much worse rock quality than the Hulk. And yet these slender needles beckon climbers to reach their summits, most of which are only accessible via 5th class terrain.

Four of the spires have been named. From north to south is Outguard Spire, The Turret, Regge Pole, and The Duck. There are also several other pinnacles and false summits that lie along the ridge and do not have names. R.J. Secor's "High Sierra" book calls The Turret the highest of these spires. This is incorrect. The impressive Regge Pole has the highest summit. I do not know of any official name for this group of spires, and have dubbed them the "Little Slide Spires" for the purpose of this page. Although the "Kettle Peak Spires" would also be fitting, as they reside at the base of the north-east side of Kettle Peak.

Due to their smaller size, the routes on these formations are less committing than routes on the Hulk. During a pattern of afternoon thundershowers we managed to salvage our backpacking trip by climbing a spire each morning - usually getting down around noon, just as the rain and lightning would roll in. For an ambitious party, 2 or 3 of these spires could be linked in a single day. These spires are also much less popular than the routes on the Hulk, so expect few crowds, more loose rock, and overall a more adventurous outing. Outguard Spire is probably the most popular since it makes the list for Moynier/Fiddler's "101 Classic High Sierra Climbs". Come with plenty of fresh webbing for updating rappel tat.

Walk though the campground and pick up the Robinson Creek Trail heading west. Follow this for about 2.5 miles and you will see the mouth of Little Slide Canyon on the left. At a nice shady rest spot with a big tree and rock to sit on, split off from the main trail heading south through a meadow. Cross Robinson Creek at a big log (no need to get your feet wet, as many others have suggested) and then continue on the trail up the hillside into the canyon. There is a band of cliffs that stretch across the canyon. One of the gullies can be navigated via a 3rd class route, or there are terrible and loose scree fields on either side of the cliffs which can be used if there is too much snow in the gullies. 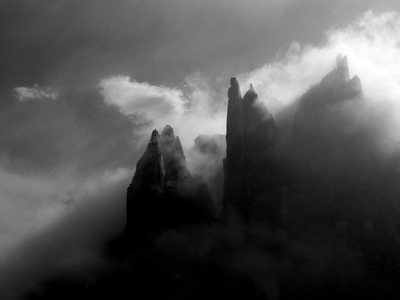 The Duck, Regge Pole, and Turret all poking thr… 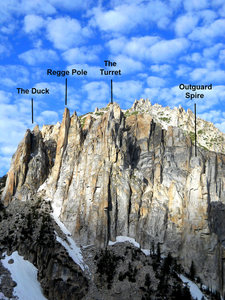 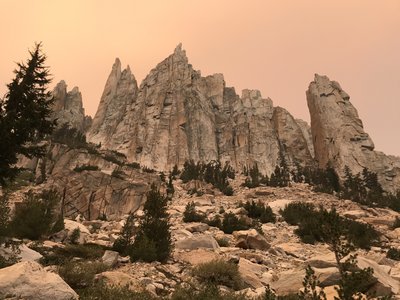 All Photos Within Little Slide Spires