Nestled at the confluence of Big Soddy Creek and Deep Creek near Soddy Daisy lies a crag that has been known only to a handful of local climbers for years. But Deep Creek is a secret no more, and with 150 routes and growing, it could become one of Tennessee's premier sport climbing destinations.

The history of Deep Creek is a subject of some controversy. Climbing probably began in the late 80s; Chris Watford and Eddie Whittemore were establishing known routes in the 90s. The cliff is part of the Cumberland Trail State Park and access was mostly through private property, so climbing at Deep Creek remained largely under the radar until recently.

In 2007, the crag was "discovered" by Cody Averbeck and other area climbers. When they began establishing bolted routes, the park service learned about climbing activity from passing hikers and shut things down.

Fortunately, this familiar story has a happy ending. Local climbers and the Southeastern Climbers Coalition (SCC) worked with park officials to reach agreement on a "memorandum of understanding" that would allow climbing to resume. Averbeck purchased a 38-acre tract near the park land and arranged to sell a portion of the land to the SCC, which raised about $25,000 to purchase this land and turn it into a climber parking lot. This parking, along with a trail established by the SCC, eliminated trespassing on private land, though some friction with local residents may remain.

Though there are a number of mostly undocumented trad lines, Deep Creek is currently focused on sport climbing. With lots of overhanging sandstone, most of the routes that have been established to date are not for the neophyte leader, ranging from the mid-5.11s on up. However, there are some good moderates in a section known as the Tea and Crumpets Wall, and more could be coming as route development continues.

From downtown Chattanooga, go north on U.S. 27 toward Dayton. Take the Dayton Pike exit; going left from the exit, drive almost three miles to the second traffic light. Turn left here onto Montlake Mountain Road. Continue up the hill past the pulloffs for Leda until Montlake dead-ends into Mowbray Pike. Turn right on Mowbray, then after a short distance turn left on Hotwater Road. Continue just under two miles to Old Hotwater Road and turn left. Watch for street addresses and take a left into the private drive at 11111 Old Hotwater. The private drive forks almost immediately after the turn-off; take the left fork and continue up the road until you reach the gated SCC parking lot on the right. NOTE: Please drive slowly past the homes in this area; it's vital that climbers be perceived as good neighbors.

From the parking lot, the approach trail starts at the SCC kiosk at the far end. Follow the trail through woods down to an old logging road; rejoin the trail on the other side of the road after a short jog left. Continue down the steepening trail into the Deep Creek valley until it intersects with the Cumberland Trail (marked with white trailblazes). Turn left on this trail and follow it down to Deep Creek; ford the creek and continue up the trail as it ascends the other side of the valley. After a short hike, an obvious climber trail will be visible; following this up to the cliff will put you at the base of Ga'Jamit (5.11d). Total approach time is approximately 30 minutes.

For more moderate climbs (5.9 - 5.11), continue along the Cumberland Trail until you cross a gully over a wood plank bridge. After a short distance, another climber trail will be seen on the left. Follow this up to the area known as Tea and Crumpets Wall; the landmark at the top of this trail is The Farmer Slab (5.12b), a face climb on the left side of a sizeable corner. Easier lines can be found to the left and right. 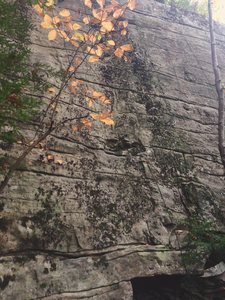 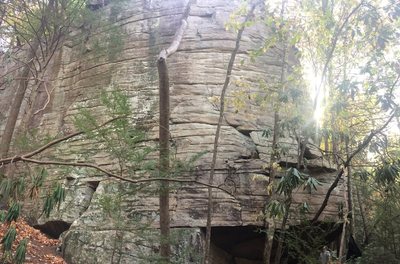 The main face of Little Hemlock Block. The furt… 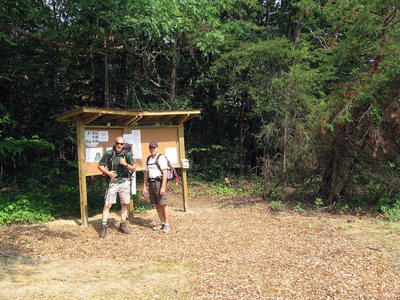 All Photos Within Deep Creek