Volcán de Fuego, at 3763 meters (12,346 feet) is the highest active volcano in Guatemala and is part of the group of volcanoes (Fuego, Acatenango, Pacaya, and Agua)that cluster around the City of Antigua. Fuego is also called "Chigag" which, in the Mayan dialect Cakchiquel, means "where the fire is." Fuego is considered one of the world's most active volcanoes, with more than 60 historic eruptions over the course of 500 recorded years.

From the trailhead at 1555 meters (5100 feet), follow the well used trail towards the west. The trail is very steep. The trail will cross a drainage before climbing steeply to a ridge. The trail follows the ridge to the summit of Fuego. At about 2700 meters (8860 feet), there are several campsites. At 3040 meters (10,000 feet), there is a less-used trail veering off to the north, and to the summit of Acatenango, but this trail is seldom used since the Soledad route to Acatenago has much less elevation gain. From the minor junction, the well-used steep trail continues on the ridge to the summit of the very active Fuego.

From the trailhead, follow the trail to the south. Make two left turns through the cornfiels. Continue along the well-used trails towards the volcano. There are several to choose from, and they all converge when the forest is reached at 2750 meters (9000 feet). From there, there is one easy-to-find trail to the summit of Acatenango. You will pass several good campsites at 3125 and 3300 meters.

Fuego is located between the departments of Sacatepequez and Chimaltenango, in the central region of Guatemala. Most guided tours leave from Antigua. From any of the bus stations in Guatemala City, take a bus to Antigua. From Antigua locate any of the numerous travel agencies for a guided trip.

If you are not using a guiding comapany, you can get to Fuego from two different directions:

From Antigua, Guatemala drive to Ciudad Vieja (5 Km) and then continue on to Alotenango (2 Km). The trail is steep and rocky, starting at about 1400 m near Alotenango and ascending to Fuego's summit (3763) in about 9 km traversing along the Quebrada San Jose, along a trail that does appear on the topo map. It takes 8-10 hours of hard work.

Another option is to drive to Ciudad Vieja from Antigua and then, along a dirt road to Soledad (2400m) on the northern flank of Acatenango (Route 10 from Ciudad Vieja to Yepocapa). This route ascends Acatenango (3976 m) first, then descends to the col between (3280 m) the two volcanoes before ascending again to Fuego. Most people spend the night on Acatenango, using the first day (4-6 hours) to climb it. Then they get up early for the climb to Fuego.

Many climbers go up by the first route and then descend by the second. 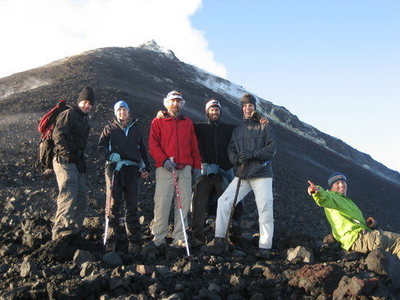 Just below the crater. The ground was warm and… 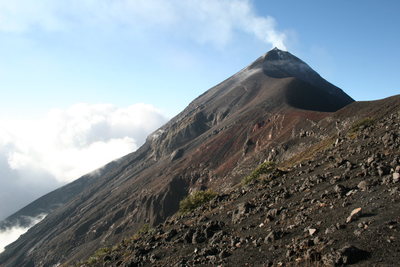 Fuego as seen from the ridge joining it to Acat… 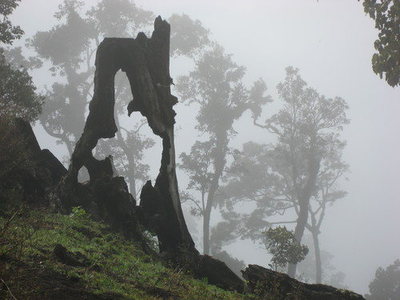 I love this picture. It was taken on the lower… 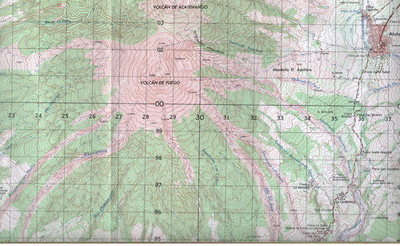 Published by the Instituto Geographico Nacional…

All Photos Within Volcán de Fuego