Standing 3,976 meters (13,040 ft) tall, Acatenango, along with its twin volcano to the south, Volcan Fuego, overlooks the historic former capital city of Antigua, Guatemala. Acatenango has two principal summits: Yepocapa, the northern summit at 3830 meters (12,565)and the southern and highest cone, Pico Mayor at 3976 meters (13,054 feet). The first well-documented eruptions of Acatenango took place from 1924 to 1927, although earlier historical eruptions may have occurred. Francisco Vasquez, writing in 1690, noted that in 1661 a volcano which lay aside of Fuego "opened a smoking mouth and still gives off smoke from another three, but without noise."

Acatenango's last eruption was in 1972 and the volcano has been dormant since then. During the hike to the top, you'll pass through entirely different ecosystems  first farmland, then cloud forest, then high alpine forest, and finally through the volcanic zone to the very summit.

Late November to early April is the dry season, and the best time to climb.

Acatenango is located between the departments of Sacatepequez and
Road map - Antigua is in the lower center section of map.Chimaltenango, in the central region of Guatemala. Most guided tours leave from Antigua. From any of the bus stations in Guatemala City, take a bus to Antigua. For a list of bus companies, visit my page Getting Around in Guatemala. From Antigua locate any of the numerous travel agencies for a guided trip.

If you are not using a guiding comapany, you can get to Acatenango from two different directions:

From Antigua, Guatemala drive to Ciudad Vieja (5 Km) and then continue on to Alotenango (2 Km). The trail is steep and rocky, starting at about 1400 m near Alotenango and ascending to Acatenango's summit (3763) in about 9 km traversing along the Quebrada San Jose, along a trail that does appear on the topo map. It takes 8-10 hours of hard work.

Another option is to drive to Ciudad Vieja from Antigua and then, along a dirt road to Soledad (2400m) on the northern flank of Acatenango (Route 10 from Ciudad Vieja to Yepocapa). This route ascends Acatenango (3976 m) first, then descends to the col between (3280 m) the two volcanoes where you can then climb Fuego. Most people spend the night on Acatenango, using the first day (4-6 hours) to climb it. Then they get up early for the climb to Fuego. 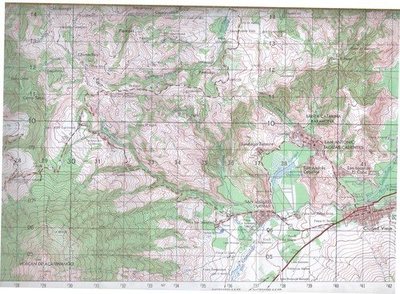 Published by the Instituto Geographico Nacional… 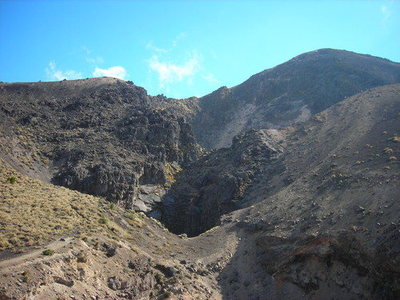 Much of the upper reaches of Acatenango involve… 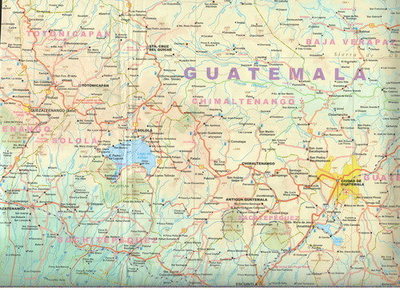 This is a road map showing the route from Guate… 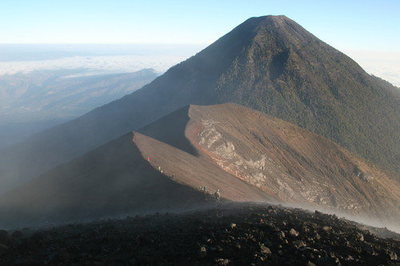 View of Acatenango from Fuego.

All Photos Within Volcán Acatenango