The "Mount Assiniboine (or Matterhorn) of the Northern Rockies". Easier and not as elevated as the eleven-thousand footer to the south, but almost as prominent. Twenty square kilometers of ice was estimated to coat peaks of the Ida massif. In the out-of-print Rocky Mountains of Canada North the authors stated: "The days of the pack train are over and no one is going to backpack 10 or 12 days just to get there." (Putnam & Kruszyna, AAC & CAC, 1985)

The first ascent party float-planed in to western Jarvis Lakes and this still looks good. Click on peak finder and drag a bit east to see the labeled Jarvis Lakes.

Southeast of Mount Ida, across one divide, peakfinder labels Kakwa Lake. The website for Kakwa Recreation Area indicates Kakwa lake is accessible by remote dirt roads that are long, potentially muddy, require extra gas, and porcupine proofing. Following the roads out on peakfinder shows them starting off Highway 16, between Prince George and McBride.

There is a public cabin near the south end of the lake. Just west of Kakwa lake, is Barbette Lake. On peakfinder, a trail seems to lead up to a glacier and divide, towards Ida. Descending a larger glacier towards the south side of Ida might work. Additionally, a longer trail leads from the north end of Kakwa Lake to the Jarvis Lakes. 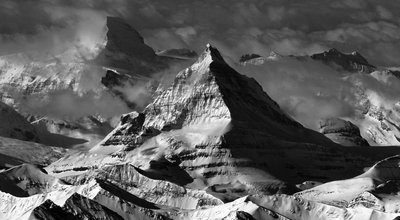