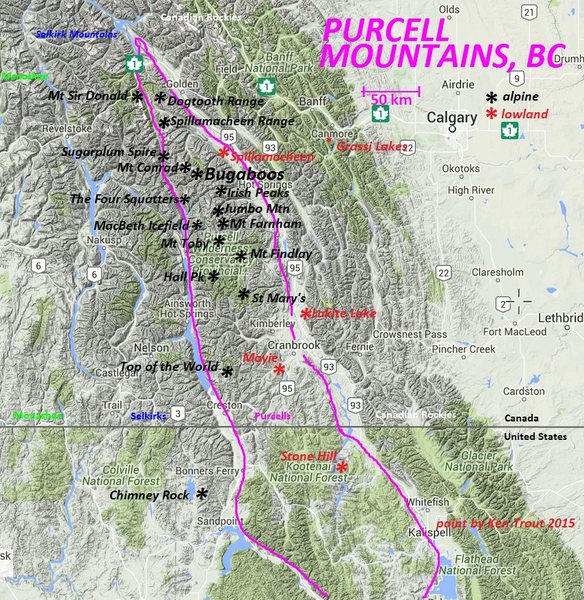 Climbing in the Purcell Mountains
The Dogtooth Range forms the northern extremity of the Purcell range. No good rock climbing has ever been found (Putnam, 1972).

Just south is the Spillamacheen Range with peaks that have glaciers and huts but the rock is still of no interest to climbers.

Next, are the Hatteras and Crystalline groups. These peaks are mostly sedimentary but there are more glaciers and some technical difficulties. Sugarplum Spire (9,640ft) is the rock climber's prize for the northernmost Purcell Mountains. The 1954 first ascent party reported at least six pitches and thought: "...nearly as difficult as Bugaboo Spire." IMHO, satellite images indicate that Sugar Plum is not anywhere near as impressive as Bugaboo.

Not much serious rock climbing has been done in the Conrad Group, yet. The peaks are capped by the most extensive glaciers of the PurcellMountains.

Mount Conrad is the highest (10,670ft/3,276m). The ski glacier on the north side of Conrad is contrasted by a huge and probably unclimbed south face. Even better are the peaks south of Mount MacCarthy. Easily seen across East Creek from the west side of the Howser Towers is a ridge of granitic peaks called the Climbing Ridge. Putnam reported three peaks with ascents and names.

Just west is Mount Stone. Stone's two mile long, knife-edged, south ridge can be viewed from the Howsers too. Although competent ski guides and grade VI wall climbers have been looking at this ridge for many decades, I've not found anyone admitting to doing this traverse. 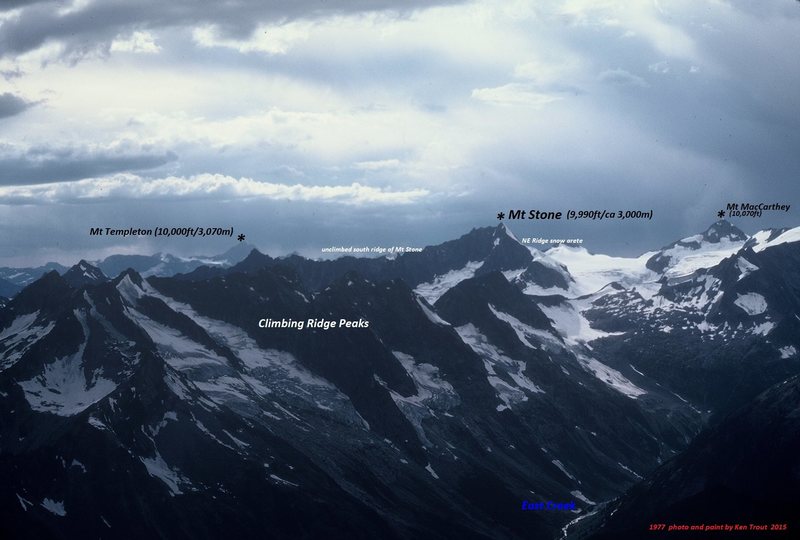 Mt Stone from the Howser Towers.
Just north of Bugaboo Spire and across the Vowell Glacier, are the granitic peaks of the Vowell Group. A lot of rock climbing has been documented on the walls, ridges, and technical summits of the Vowells . 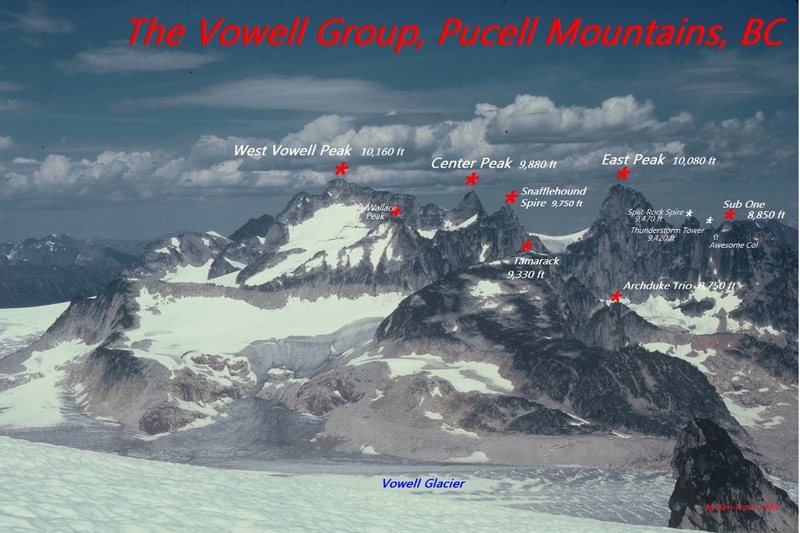 The Bugaboo Group is the most popular and well documented. 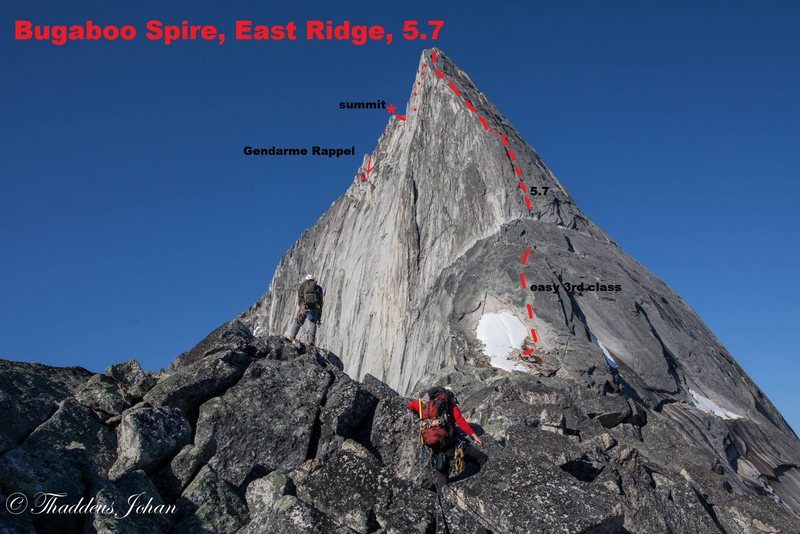 The Bugaboos, Purcell Mtns, BC submitted as a clean photo by MP contributor nelsonthad
Southwest of the Bugaboos, on the edge of the Duncan-Beaver Trench are the remote Four Squatters Group. 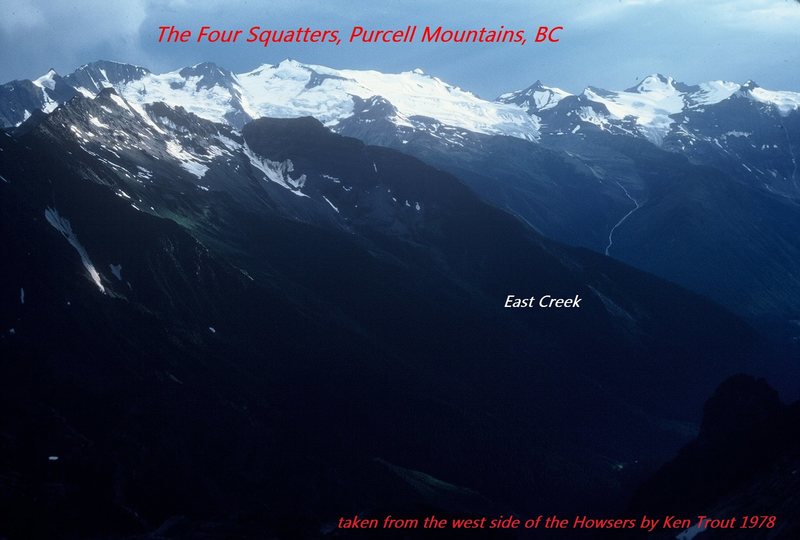 Four Squatters Range from near the start of the Beckey-Chounaird
The next group of granitic summits south of the Bugaboos are the Irish Peaks of the Taurus Group. 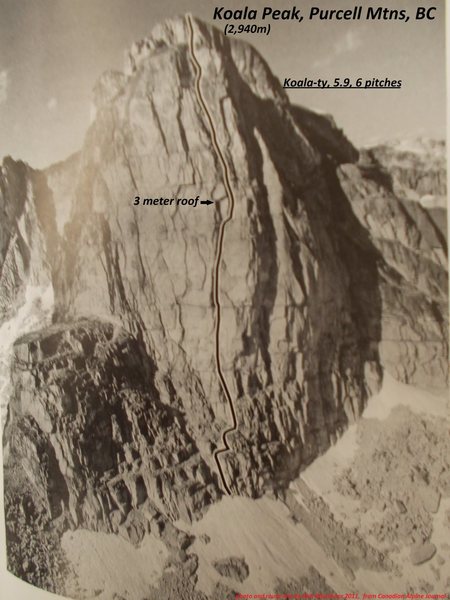 Irish Peaks, Purcell Mtns, BC
A little further south, and about 30 kilometers west of Invermere, the highest peak of the Purcells is Mount Farnham (3,493m/11,343'). On the shoulder of Mount Farnham is Farnham Tower; a technical summit of good quartzite perched on a high ridge of bad shusswap rock. 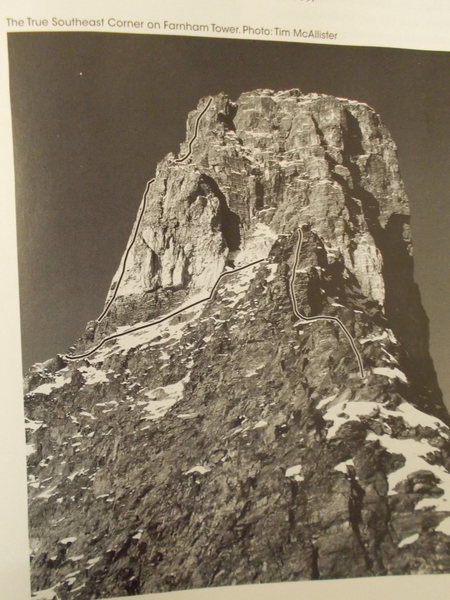 Just southwest of Mount Farnham is site of proposed Jumbo Mountain Resort , soon to be perched atop the Commander Group. The Lake of the Hanging Glaciers is a scenic highlight. Not much good rock climbing here but plenty of mountaineering. Hunter S Thompson once warned us to never confuse the sport of skiing with the industry. Not everyone got the memo. Thanks to Patagonia and friends for the heads up on Jumbo Mountain!

Protected in the Purcell Wilderness Conservancy is the Toby Group. Big glaciers and peaks can happily be accessed by the Earl Grey Pass trail system (7,475ft/2,243m). This trail is the most civilized way to hike across the width of the Purcell range (five cable car crossings over Hamill Creek). Mount Hamill (10,640ft/3,243m) and Mount Toby (10,572ft/3,212m) are the highest peaks.

The next group south along the crest is The Findlay Group; perhaps the most remote of the granitic peaks. Mount Findlay (10,374ft/3,162m) is the highest in the group. Other peaks of the Granite Creek cirque with rock climbing potential are Mount Lees and Mount Clutterbuck.

The fabulous Leaning Towers are deep in the Purcell Wilderness Conservancy Parks. 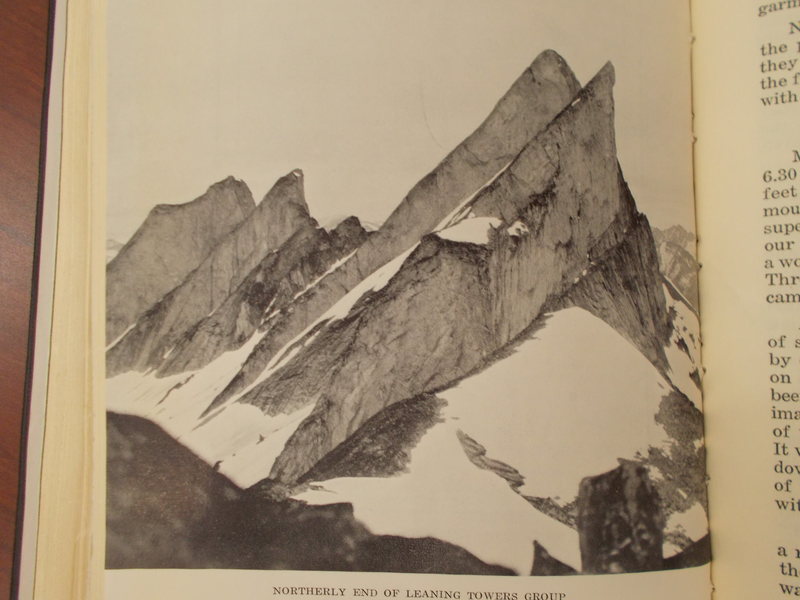 Photograph by Mr. A. A. McCoubrey of Manitoba, discoverer of "The Leaning Tower" and first ascent expedition organizer, CAJ 1933. Sorry Mr McCoubrey! Janice in accounting says she don't give a... we have to call it Hall Peak now.

The southern most proven alpine rock climbing in the Purcell Mountains is found in the St Mary's Lakes Alpine Park. Fred Beckey, Art Twomey, and others have found easy access but not great rock.

LOWLAND CRAGS OF THE PURCELL RANGE

The valley containing the official headwaters of the Columbia River is mostly filled with unclimbable glacial till. On the west side, the Beaver-Duncan, and Kootenay Lake trenches are still a rock climbing unknown. But a few pieces of solid bedrock, mostly in the eastern foothills, have been found and developed.

Just a bit north of the road into the Bugaboos, there is a convenient dolomite cragging area called Spillamacheen.

A bit south of Cranbrook, some good sport climbing has been developed at Moyie Canyon. No one has posted any beta for Moyie on Mountain Project (yet, 2015). The link should take the curious to rockclimbing.com.

Lakit Lake is a well developed lowland sport climbing area west of Cranbrook. This crag is actually in the Canadian Rockies but a convenient respite for climbers visiting the Purcells. 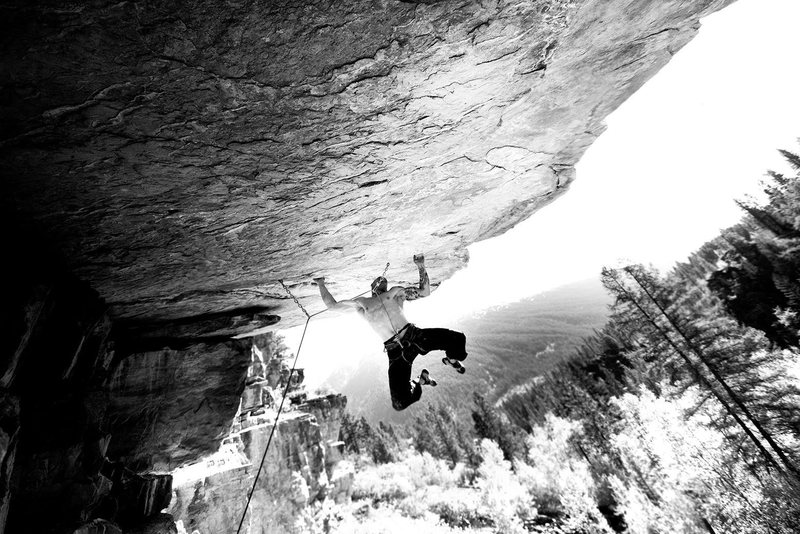 Stone Hill, Montana, has a good supply of truly roadside climbs on excellent quartzite. Stone Hill is located along Montana Highway 37, on the east side of Lake Koocanusa. Some of the routes are on the margin of the busy road, others are less exposed to the noise and traffic. 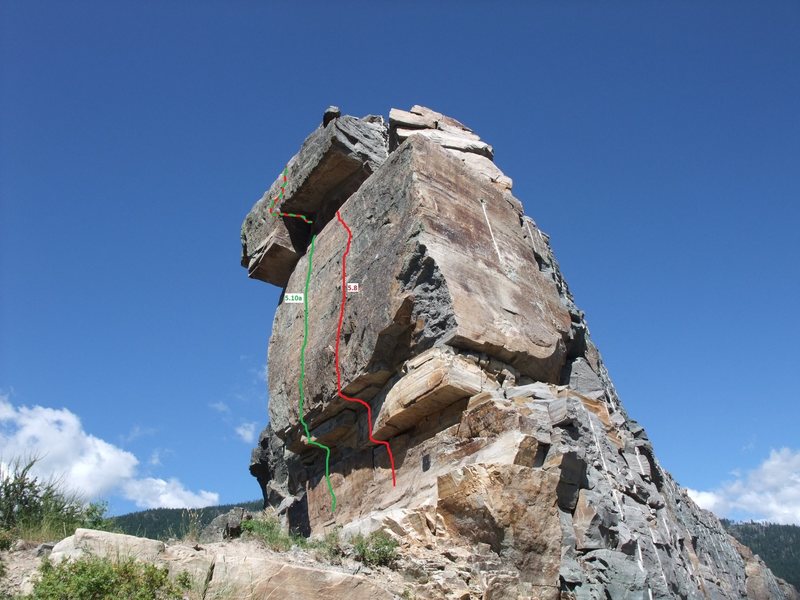 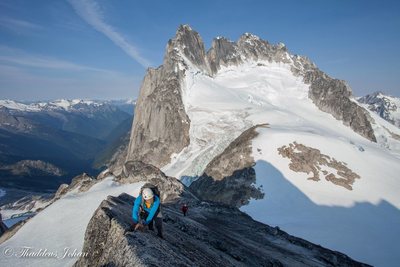 Climbing Pigeon with Howser behind. 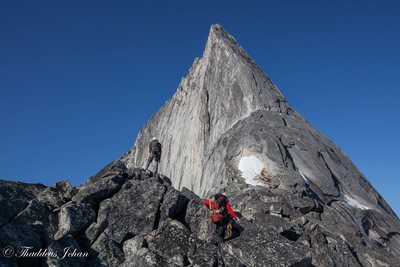 Bugaboo on the North East Ridge.

All Photos Within Purcell Mountains