Mount Assiniboine is often called: "The Matterhorn of the Canadian Rockies". From Lake Magog, the mountain radiates a hypnotic glow that blinds climbers to the ugly hazards of a loose and dangerous mountain. For over a century, Assiniboine has been a big player in the sport of mountaineering.

In 1903, Edward Whymper brought Swiss guides to Canada. Three serious attempts on Assiniboine had already been repulsed. All the higher peaks in the Canadian Rockies were still unclimbed too. The arrival of the alpine superstar created a stir in the competitive world of Canadian peak bagging. No worries! Mr Whymper was reluctant to leave the good life of the Lake Louise/CPR climbing scene (Chris Jones, Climbing in North America, 1971).

The Swiss guides and James Outram couldn't let such opportunities slip by. Mr Outram politely "borrowed" Mr Whymper's frustrated guides and the enthusiastic team sent! First, they made it up Assiniboine by traversing to the backside and discovering an easier route (SW Face, 4th class). Then they made sure to tick the route everyone else had been trying, the North Ridge (5.5x, onsight downclimb,1903).

(Maps & disposable camera prints all shot with Nikon COOLPIX L22 in the studio.)

This is the most common approach for the North Ridge and North Face routes (purple dashes on the Large Scale Approach Map). From Shark Mountain Trailhead, the trail leads to the valley of Bryant Creek. Once in Banff National Park, steep walls spout huge waterfalls. Finally, climb over Assiniboine Pass and into British Columbia. Then the mountain becomes visible and Mother Nature totally gets her freak on.

Begin with driving from downtown Canmore up to the Spray Lakes, passing Grassi Lakes and EEOR along the way. Continue on the Spray Lakes Road until just past the reservoirs. A sign for the Mt Engadine Lodge marks the proper place to turn right for the Shark Mountain Trail-head.

Hike a fire road several miles, over a small pass, across the Spray River, and soon after cross Bryant Creek (good bridges). The Bryant Creek Trail is in Banff National Park. To climb out of Alberta, a short bit of brush, water, and steep trail conspire against climbers crossing Assiniboine Pass.

Once in British Columbia, rolling meadows, spruce covered hills, and a better trail lead to the Assiniboine Lodge junction (turn left for the rustic chopper-port). Not far beyond is the Lake Magog Campround. From the campground follow a nice trail for a couple of miles until it ends at the rockslide and Gmoser's Highway begins.

For hikers coming in from the Mt Shark trailhead, you'll need to hike over to the Assiniboine Lodge to pay up. First, hike past the lodge turnoff to the campground and set up tents. Then hike over to the lodge without heavy packs. Grizzly resistant food storage and water are available.

The problem with the Canmore approach is unreliability due to trail closures. Some years, grizzly families loiter persistently along the upper Bryant Creek section of the trail. Cascade Rock, Gibraltar Rock and other cliffs of the u-shaped valley funnel wildlife into humans on the trail. Inquire with Banff National Park wardens or Assiniboine lodge about the closure status.

The closed section of trail extends from the Bryant Creek wardens cabin up to Assiniboine Pass. Zoom in to spot the tiny cabin on my 1946 Trail Map. The cabin is found at the junction with the standard Bryant Creek Trail and the Wonder Pass/Marvel Lake Trail. Magog Lake via Wonder Pass looks like a scenic alternative to Bryant Creek. (unpainted on 1946 Trail Map ).

Driving 40 klicks of good gravel to the Marvel Pass trail-head is the fastest way to do Assiniboine's easiest route, the Southwest Face. (red dashes on Large Scale Approach Map )

Begin northeast of Radium Hot Springs, BC, with a turn off Highway 93 onto southbound Settlers Road. 0.0 kilometers.

After 12 kilometers, fork left onto the Kootenay-Palliser road.

At 14 kilometers, left onto the Kootenay Cross road.

At 32 kilometers, left onto Cross Mitchell road. This is followed to a Baymag Plant (marked on maps), about 40 kilometers from the highway.

At the Baymag Plant, a sharp right is made onto a rougher road. After crossing Aurora Creek, park and porcupine-proof your vehicle near the sign for the Marvel Pass trail.

Hiking directions are given on the Southwest Face Mountain Project page.

The East Face of Mount Assiniboine has already been done 'voie gnarly'. Summer of 2004, Frank Jourdan hiked in for the second ascent, solo, of the Cheesmond-Dick, V, 5.9, A2, M??. Mr Jourdan thought that the hike in from Shark Mountain to Marvel Lake was the hardest 20 kilometers he had ever hiked.

For BCers, coming over the Mount Sturdee col makes for a rough, but shorter hiking approach to both the North Face and North Ridge. Descending to the RC Hind Hut is possible, but unnecessary. Bring a good tent.

From the far end of Assiniboine Lake, scree is climbed out of the valley. Eventually, a traverse left leads to the icy snout of a glacier (crampons). Dodge crevasses up to a final steep dirt hill to reach the col.

For sure, Helicopters are cheating. On the other hand, I would rather spend my bear protection money on a heli-ride instead of guns (or even bear spray).

Flights in to Lake Magog must be booked through Assinboine Lodge. To benefit hikers, noisy choppers are not allowed to fly every day. A guided ascent, based out of the lodge, using the RC Hind Hut, and climbing the North Ridge is the experience of a lifetime.

Grizzly bears love Mount Assiniboine Provincial Park. All approaches penetrate grizzly bear country. Traveling the trails near Lake Magog, you'll likely see large groups of heli-hikers all sporting anti-bear spray on their belts. A group size minimum of four is recommendable for any alpine climbing in Canada. Bear-proof food vaults are important for safe camping. Staying in the Naiset Cabins, by the lodge is a good option to avoid bears too.

Snafflehounds, porcupines, and mice have eaten a lot of brake-lines, tires, wires, and v-belts in BC trailhead parking lots*. Chicken-wire barriers around vehicles are another human adaptation to the wild world of British Columbia. Building a barricade around the car is a lot of work, but this must be done to avoid stranding.

Literature has long warned climbers about drinking from streams anywhere below the Hind hut.

*Bugaboo mountain guides use to shoot the troublesome ground squirrels up at Boulder Camp (Bugaboos). Weeding out the slowest resulted in the fast-forward evolution of British Columbia's super-rodent; the snafflehound. (Galen Rowell, early '70s). 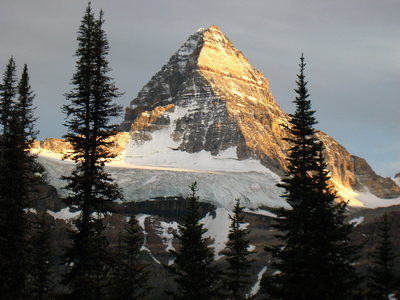 Sunset on the North Face of Mt. Assiniboine 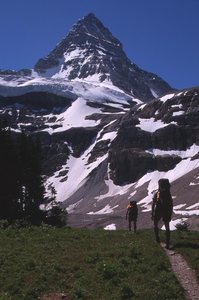 Far side of Lake Magog. 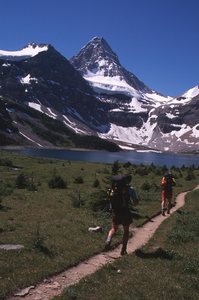 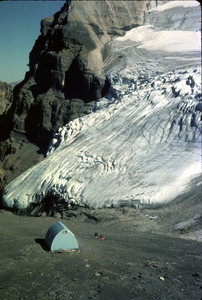 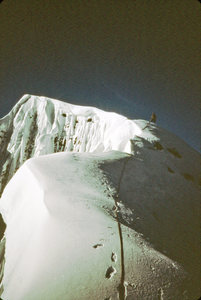 Dave Koch on the summit ridge 1984 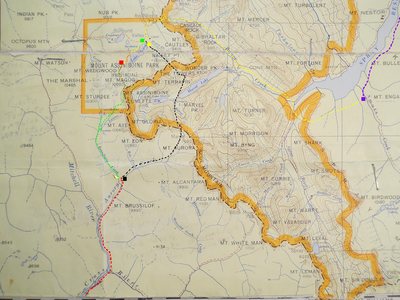 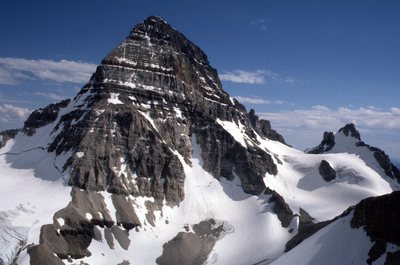 Great view of the N side from the peak across t… 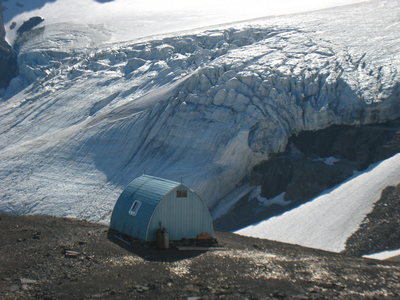 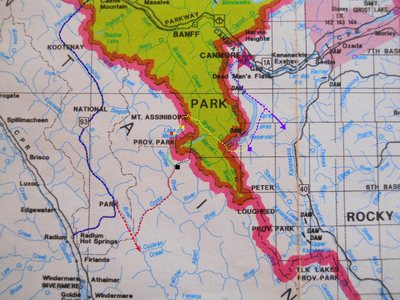 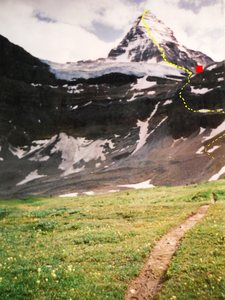 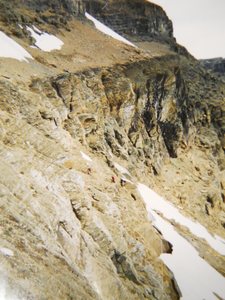 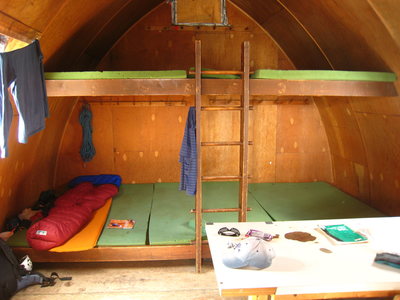 Cozy accommodations within the Hind hut

All Photos Within Mount Assiniboine (3,618m)