GEOGRAPHY OF THE COLUMBIA MOUNTAINS

Four mountain ranges make up the region called the Columbia Mountains. They are the Selkirk, Purcell, Monashee, and Cariboo mountains. Starting in the late 1800's, mountain climbers called the mountains east of the Canadian Rockies the Interior Ranges of British Columbia. The residents of Trail, Castlegar, Nelson, and even Kamloops tend to ignore the other two names and call the southern BC part of these ranges the Kootenays. So this region has three legitimate names thus making the Columbia Mountains hard to define. 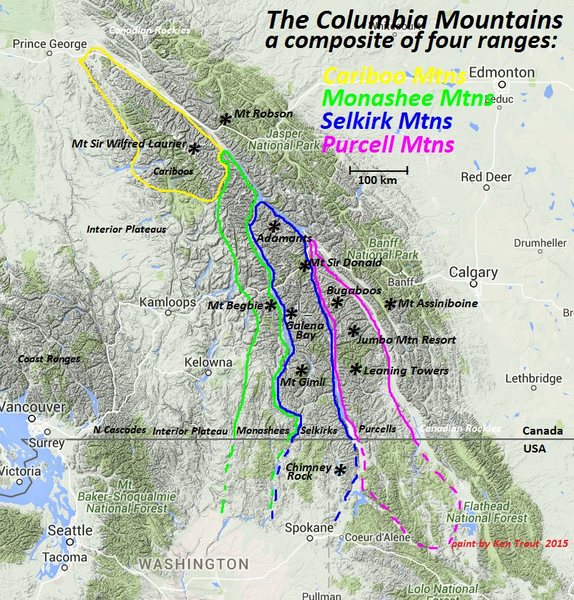 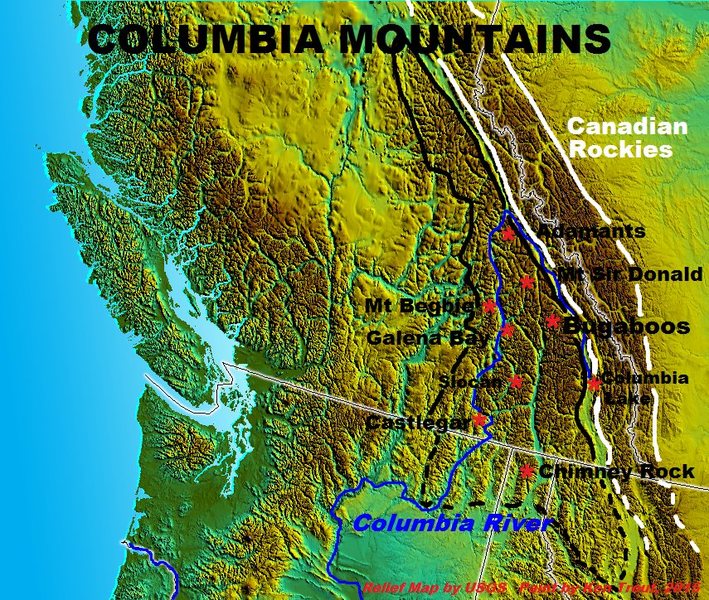 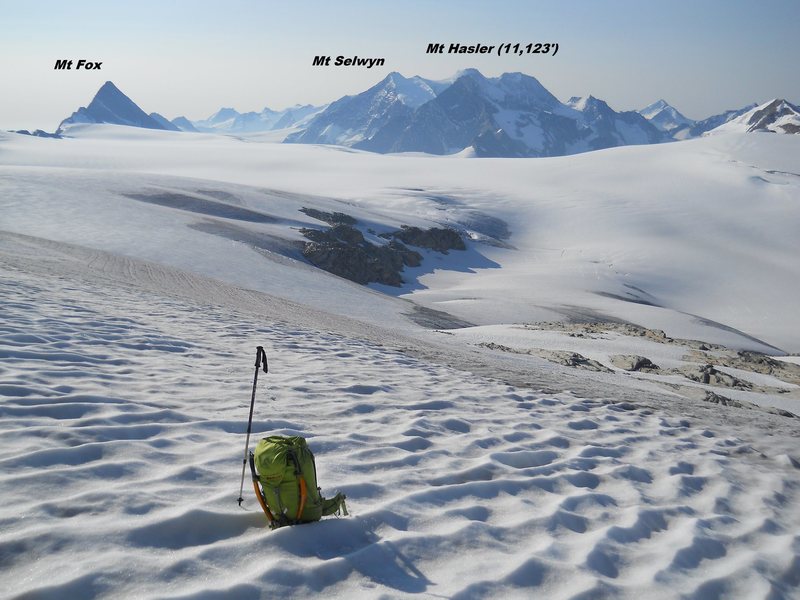 Looking south to the Illecillawaet Neve, Selkirk Mountains by KT, 2012

THE SELKIRK RANGE OF THE COLUMBIA MOUNTAINS
The Selkirks are where to find the Adamant Group, Mount Sir Sandford, Mount Sir Donald, the Valhallas, and the Battle Range. The peaks near Rogers Pass are the oldest climbing area on the continent. The historic climbing was all about the high peaks. 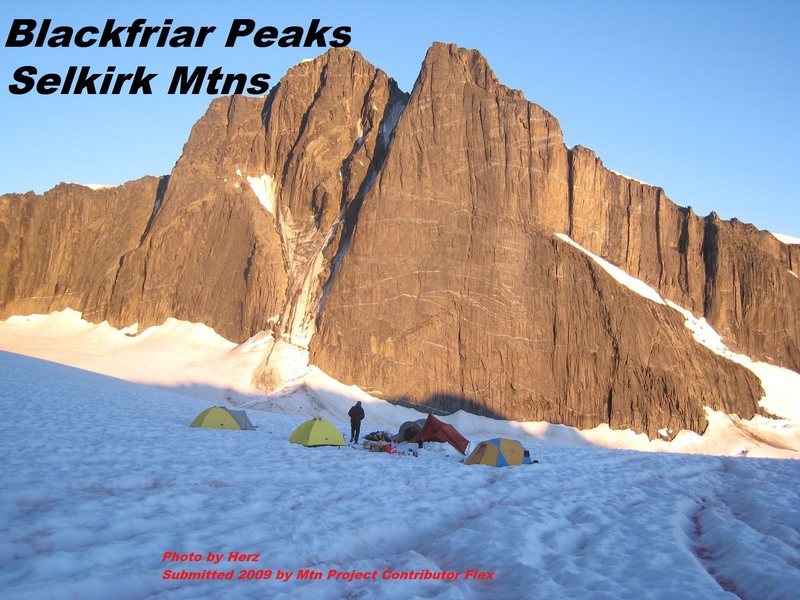 The remote west side of the Adamant Group

VIDEO OF MOUNT SIR DONALD
Transcript from basecamp: "Out there is the Rogers Pass highway in the valley and Mount Bonney and Sir Donald."
plus.google.com/u/0/photos/…

ROCK CLIMBING IN THE SELKIRK MOUNTAINS
Today, good lowland rock climbing is also available. One example is Slocan Lake Bluff, located at the south end of Slocan Lake by the abandoned lumber mill in the town of Slocan. There are almost one hundred climbing routes and the approach is short, level, and partly paved behind the mill. There is a campground with showers and a public beach in the town of Slocan. 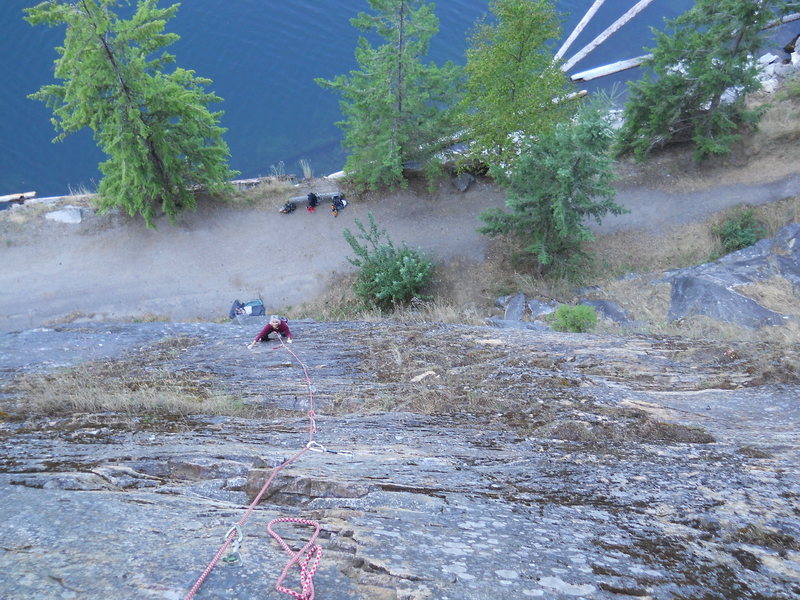 The West Kootenay Rock Guide by Aaron Kristiansen and Vince Hempsall is available at the Valhalla Pure Outfitters. Use it for all the climbing found along the Columbia and Kootenay rivers in the vicinity of Castlegar and Nelson, BC.

The best information for the alpine climbs of the Selkirks is found in Selkirks North and Selkirks South by Dave Jones, 2001.

THE PURCELL RANGE OF THE COLUMBIA MOUNTAINS 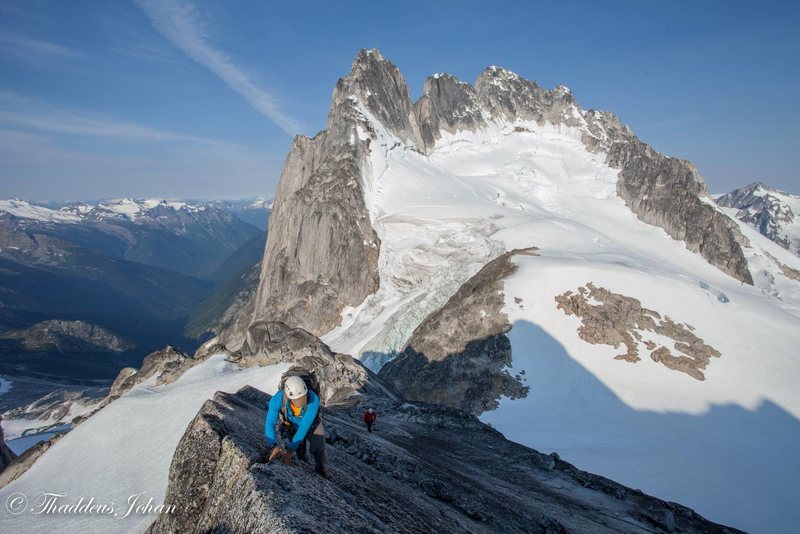 The Howser Towers from Pigeon Peak in the Bugaboos. submitted 2014 by MP contributor nelsonthad

The Purcell Mountains are where to find the Bugaboos. The Bugaboos are well covered by guide book information but they are only a small part of the Purcells. There is no comprehensive guide book for these wilderness Alps currently.

The 1992 edition of the American Alpine Club Climber's Guide to the Columbia Mountains left out the Purcells and only included the Selkirk, Monashee, and Cariboo ranges! Even worse, an editor for R&I once wrote that the Bugaboos were in the Canadian Rockies. There is a reason for all this confusion about the Purcell Mountains.

The confusion began around 1990 when Government Canada seemed to abandon the scientifically correct Interior Ranges for the incorrect Columbia Mountains. Stalwartly, the Canadian Alpine Journal, containing reports by the geologists, glaciologists, and surveyors who cataloged Canada's mountains over 100 years ago, still lists new climb reports under the heading Interior!

GEOLOGY OF THE BUGABOOS
The Bugs are an island of good granite lost in a mountain range made mostly of soft metamorphosed sediments called the Shusswap Complex. Historically, a Cenozoic tectonic collision caused the Shusswap metamorphism. Next, granitic magma intruded the soft choss, cooled, and then solidified. Subsequently, during the last two million years or so, uplift and alpine erosion chiseled off the choss and left behind the well sharpened granite spires of the famously spectacular Bugaboos.

THE MONASHEE RANGE OF THE COLUMBIA MOUNTAINS 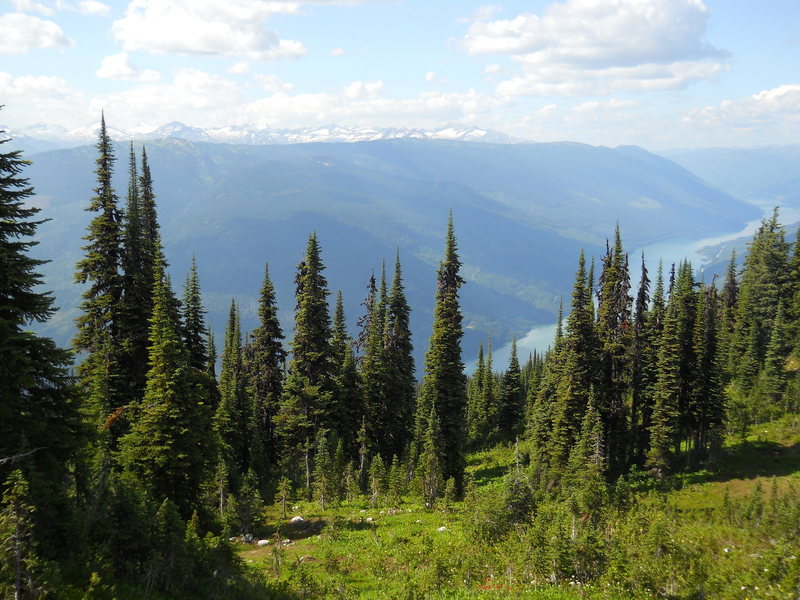 The northern Monashee range and Columbia River from Mt Revelstoke. by KT
The Monashees have two groups of steep, alpine, peaks to recommend. The most popular is Mount Begbie, a slightly technical but major peak near Revelstoke. Farther south is the group of peaks containing Mount Odin and Mount Thor. These spectacular peaks are visible from the ferry that connects Shelter Bay to Galena Bay by crossing Upper Arrow Lake.

ROCK CLIMBING IN THE MONASHEE MOUNTAINS
Between the Shelter Bay ferry and Revelstoke, along Highway 23, there is good lowland sport climbing on quartzite. Well developed sport crags are hidden in temperate rain-forest. The two main areas are Begbie Bluffs and Blanket Creek. There is a local rock climbing guide book available in the town of Revelstoke. Impressively, both areas are marked on the 5th edition of the Kootenay Rockies BC Backroad Mapbook (p34 Begbie Bluff, p35 Blanket Creek). 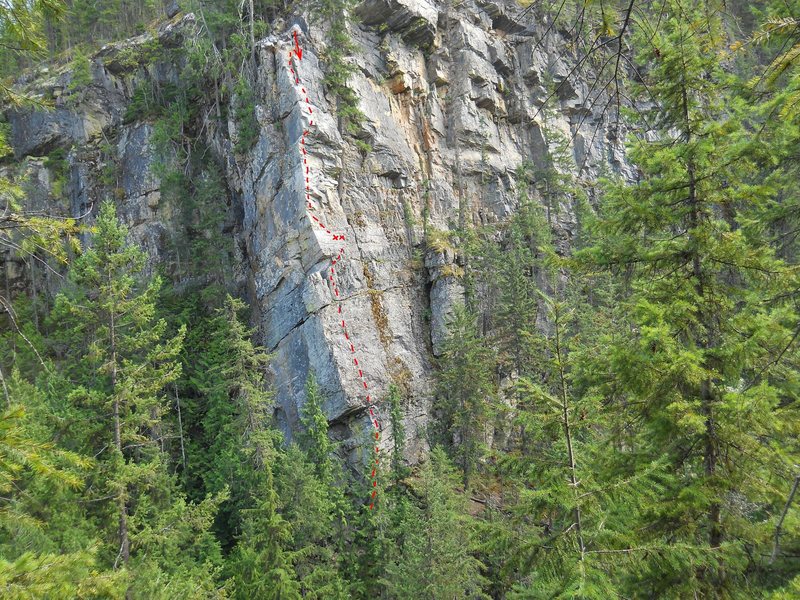 Blanket Creek Arete 2 pitches, 5.10 by KT
Perhaps the oldest and best route along the Columbia River is Sunshine Crack on the Kinnard Bluffs. This major climbing area is a few kilometers downstream from Castlegar, BC. Local climbers would say these bluffs are in the Kootenays, not the Monashees. 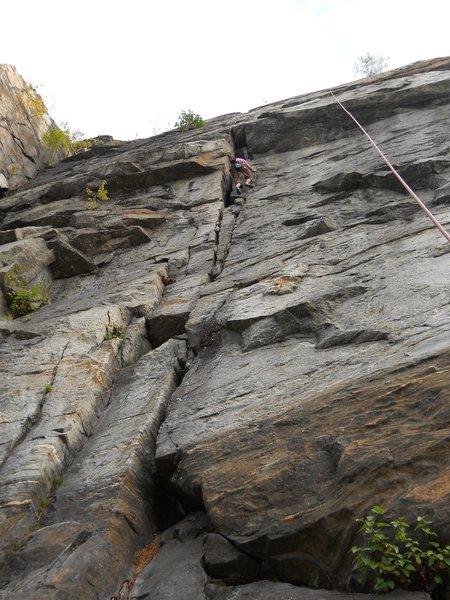 THE CARIBOO RANGE OF THE COLUMBIA MOUNTIANS
The Cariboos see mostly ski industry visitors, via choppers. William L Putnam had this to say in 1971: "There still remain a dozen unclimbed summits exceeding 9,000' in the Northernmost Cariboos." The Caribous are mostly drained by the Fraser River, but nevertheless are still is considered a range of the Columbia Mountains.

MOUNTAIN CONDITION REPORTS
Canadian mountain guides have been around a long time, more than a century now. The Association of Canadian Mountain Guides generously share their hard won observations and photographs of current conditions for both the Columbia Mountains and Canadian Rockies.

HAZARDS OF THE COLUMBIA MOUNTAINS 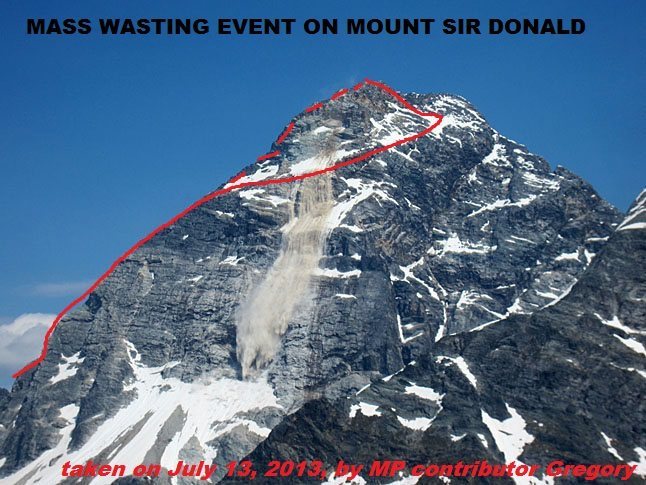 Rockfall!!!
These mountains have all the hazards found in the Alps!!! Additionally, the longer summer days prevent the summer freezes up high that lock-down rolling stones and freeze snow bridges solid. Cross country travel is exceptionally difficult and dangerous due to steep walled glacier valleys filled with dense bushes instead of trees.

Grizzly bears love these mountains so travel in groups of at least four. The good weather brings mosquitos! And worst of all, mean mountain goats are always trying to scare climbers by purposefully kicking rocks down from above!! Well at least they try. Even though they practice on their kids, their aim sucks. 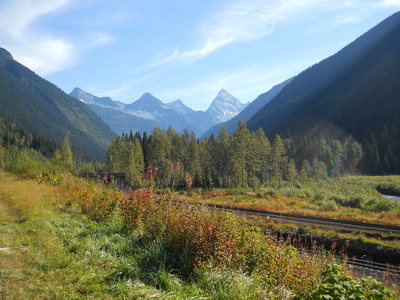 All Photos Within Columbia Mountains