The dam was first explored by Dean Lords and friends in 2004, but after a few years, folks stopped coming. In the early spring of 2010, Joel Nielsen and Blair Thorpe worked a few problems on the floodplain which sparked new interest. Since then, around 100 problems have been brushed from v-easy to v9.

Dean and his wife Heather deserve a mountain of credit for their work at the dam. Many hours were put in engineering landings, brushing holds and even doing a little climbing.

Most of the FAs listed here are from the 2010 revival, although it's likely that most of the good stuff had already been done. If one with better knowledge wishes to amend the record, please speak up.

It's not the most pristine setting; debris from the 1976 disaster is still everywhere, along with plenty of spent shotgun shells. However you will have it basically to yourself. Camping is ok; There are fire rings scattered around and plenty of driftwood to keep the good times rolling. Have fun and don't make a mess.

In the heat of summer the best time to climb is early morning or about 11 at night.

The boulders are mostly composed of welded tuff, and rock quality varies. Some routes feel like bullet-hard granite, while others shed key holds regularly. Landings are generally very good.

From Idaho Falls-- take the 20 north to 33 East. 3 miles after Newdale take a left at the Teton Dam Site sign. at the end of the paved road bear right onto the dirt. Take 2 left forks and park at the loop.

Go past the white "bureau of reclamation" gate about 75 yards, look for a cairn on your left. This climber's trail will take you to the quarry. Or you can just follow the road.

With 4 wheel drive and a thirst for exploration it is sometimes possible to drive all the way down into the canyon via dirt roads north of the normal parking loop. 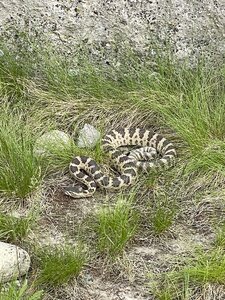 A large Great Basin Rattlesnake at the Quarry.…