Areas in Krakow - Czestochowa upland. AKA The Jura

Named for the Jurassic period limestone that forms the region, the Jura has a seemingly endless amount of outcrops, towers, and caves hidden across the landscape between Krakow and Czestochowa. The average Polish landscape is characterized by rolling forested hillsides, small farms and little towns with beautiful churches, usually more inviting to invading armies then climbers... This region has a nice exception, the tiny hills are covered with rocks! Many of these hills have medieval castles at their tops, originally designed to utilize the natural outcrops for added protection. Unfortunately many of them were destroyed when Poland was invaded by the Swedes in the 1650s. Exploring the castles can be a fun rest day activity. The castle at Bobolice has jousting tournaments. The Olsztyn castle has a firework and laser light show every fall. An other interesting thing to look out for is the Meta Minardi, the most poisonous spider in Poland, which lives in caves north of Krakow.

Since the climbing is spread out over such a large area, I would highly recommend the local guide books. I was able to find 4 guide books that cover the region, and also some mini guides in the climbing mags. The guide books Jura 1, Jura 2 and Jura 3 by Pawel Haciski cover areas from north to south respectively and do a good job of organizing the very complex region. There is also a good book to the Ostance Jerzmanowickie/Dolina Szklarki area by Tomasz Slusarczyk.

As to be expected in such an expansive area, there are a multitude of access issues. Some of the rocks are in areas that don't officially allow climbing, while others are on private land. Some of the rocks are even protected by eccentric neighbors who will do anything to dissuade climbers. Tactics include everything from chopping bolts to smearing them with cow pies!

You can find camping in the area, and hotels are very cheap(compared to western European countries). There are also countless B&Bs available as aggro tourism gains popularity.

Located in south central Poland. Train or plain to Krakow. Best to have a good road map and a rentel car from there... 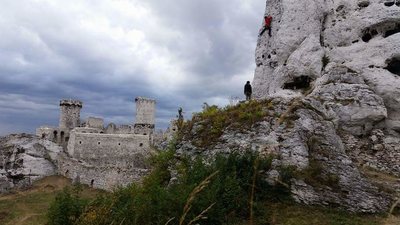 Cragging at the Ogrodzieniec castle 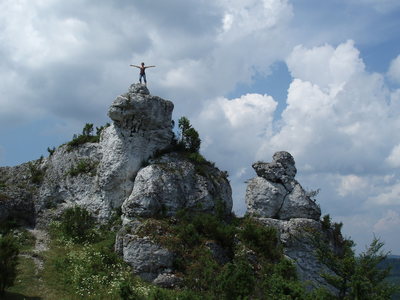 enjoying the wonders of the Jura

All Photos Within Krakow - Czestochowa upland. AKA The Jura


More About Krakow - Czestochowa upland. AKA The Jura