Nature Conservancy issues, the climb is only accessible via a 1/3 mile swim

Castle Rock is a well known cliff jumping location in Waccabuc, NY. My climbing partner and I recently put up a few DWS lines that are most likely FA's, only because of the sketchy-ness of the climbs. The cliff is atleast fifty feet and isn't completely vertical, so unpredicted falls could be dangerous.. Climb with caution. Water is infinitely deep but the higher you get the farther you need to kick off the rock to ensure a safe landing. The main line goes right up the middle of the rock. Start from the waters edge at the base of the rock or traverse from right to left to get under the middle of the climb. A fifteen ft V0/1 boulder problem puts you on a ledge about a third of the way up the face. There you can choose one of two lines, left or right. The left line is sketchy, loose chossy rock with a shallow fall zone. Its probably a 5.8, but it's an all or nothing solo because falling isn't an option on the left side of the crag due to the decreasing water level. It works up to a rest spot and then moves right, topping out over the middle of the face. The more distinct and difficult line goes directly up the middle of the face, starting at the right end of the low ledge. A protruding flake acts as the handstart to this line. The first sequence of moves getting off the ledge are by far the most difficult and awkward because a slip would result in a fall to the ledge and then a tumble down the face, spotter recommended here!!! Follow a small dihedral up and right almost coming out to the arete of the crag. This line is a 3-part climb. The first is the easy boulder problem to the low ledge, the second is the crux sequence up the dihedral crack to a smaller rest ledge, and the third is a moderate top out straight up. Overall, the climb is probably only a sustained 5.9 but there are certainly 5.10 moves within this line and a serious risk factor that must be accounted for. If not for the sketchy solos, its still an awesome cliff jump and you can play around on the lower half of the rock, but for the thrill seekers I recommend giving it a serious burn. Good luck and give me some feedback, AGAIN: CLIMB WITH CAUTION

RT. 123 to 35, turn right on Mead Street. There will be a car parking pull off on your left hand side and a trail just up the road that leads to the waters edge. Be discrete, its a private lake and the residents aren't exactly friendly. Bring a boogie board to float out on, no boats allowed 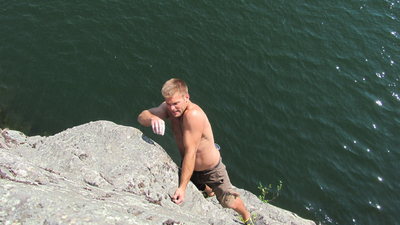 All Photos Within Castle Rock