Owl's Cliff consists of two main cliffs located on the peak south of Mt Tremont, south west of Bartlett NH. They can be viewed by looking north from the Kancamagus Highway across a marsh near Passaconaway campground. The two cliffs in the distance make up the "eyes" of the owl. There are lots of Owl cliffs in New England, so this area is not to be confused with Owl's Head in Oliverian Notch nor the one in the Pemigewasset Wilderness to the west. 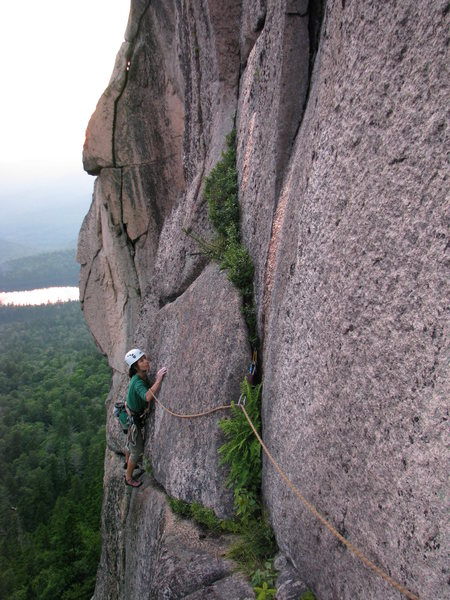 Olga balancing across the no hands section of the third pitch traverse of The RGC. Dave Quinn's classic 4 pitch 11c, Crack of the World, can be seen in the background

For the adventurous, if you are willing to bike/hike a little, Owl's offers great granite climbing away from the masses, with a beautiful view of the surrounding mountains with little evidence of civilization. The rock is crumbly in spots but mostly nice solid granite up to 250 feet tall. There are many high quality pitches to do here, of all grades, from 5.4 to stiff 13, trad, mixed and sport, slabs, faces, super classic cracks, corners and aretes, with routes up to 4 pitches. Currently, there are about 75 fully established pitches between the two cliffs, with the left cliff having the most (about 50), with many projects in the works and room for many more classic lines. Most climbs are well protected, with modern bolted anchors with rings or heavy quicklinks, though certainly bring you trad skills and self sufficiancy. You will be out there and not close to quick rescue. Most climbs can be done with a single 60 m rope.

See Glenn's map mountainproject.com/v/new_h… Owl's is approached off Bear Notch road. The easiest way seems to be to go in via Rob Brook Rd, a wide, well graded, gated forest road. People have approached from various points further north up Bear Notch Rd., but, though they look shorter as the crow flies, they mostly entail more up and down climbing and more bushwhacking through difficult terrain. For only going to the Right Cliff, some have reported that coming in from high on Bear Notch road, then rapping in from the top works well, taking about an hour (of course you then would have to top out some how). I haven't done this myself, so can't give directions for that way. There isn't any real quick way between the two main cliffs, so you should probably pick one or the other for the day. 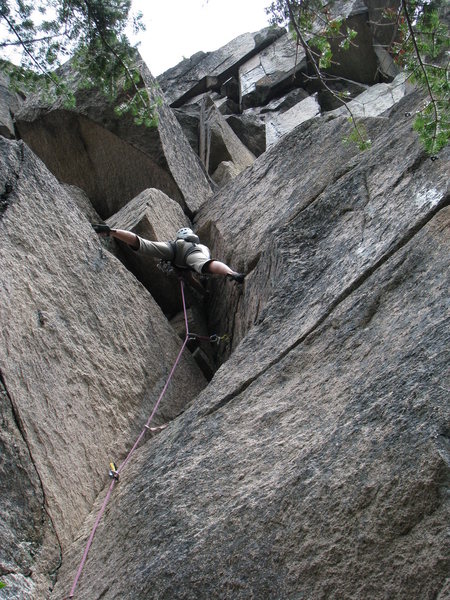 Warming up the muscles on an unnamed 5.10a, Sporty Area, Owl's Cliff Left Climber - Olga Mirkina

To go in the Rob Brook way, hike or bike in about 2.5 miles and you should see a sign on your right for the Brunel Trail. If you are not over loaded, a bike will really shave off time and make the trip out and back much more fun. Continue past the Brunel for a few hundred yards and take a right @N44.02302 W71.35633 up a grassy forest road. When you come to a "Y" take a right, following the arrows for the snowmobiles. In the guide, Handren mentions a shortcut we used to use that cuts off just before the "Y". We found it only saves a couple minutes and is steeper. Don't bother with it. Just after the forest road gains its highpoint but several hundred yards before it recrosses the Brunel, keep an eye out for a good sized cairn on the left near N44.03455 W71.35921. Bushwhack in following more cairns to find the remains of a skidder trail @N44.03499 W71.35893. This should all be easy to follow. The bushwhack is a few minutes past a steep heavely eroded section, just after a seaonal stream crosses the trail, and a yellow arrow sign on a tree on you right. Head up the skidder trail, which peters out into a game/climber trail up the hillside, to eventually get to the Oracle Boulders @ N44.04223 W71.35942. The largest of these, the Gun Sight Boulder, has a 5 bolt route up an arete. From the uphill side of these you break right or left and up depending on which cliff you are going to. Along the way, about 10 minutes before you would get to the Oracle Boulders, there is a "T" junction at the top of a short steep section, marked by a cairn. Left goes up to the crags and right leads to good water in about 3 minutes@ N44.04129 W71.35745 (not the minipond you first come to, but a stream issuing forth from a spring at a rock). Be especially considerate about not relieving your self anywhere even remotely near the spring, please.

I have added the GPS coordinates(UTM UPS, WGS 84), which should make it clear going. For Google maps, just flip the order of the coordinates, replace the "W" with a "-", and take out the "N". Total travel distance from parking to get to the left cliff is about 4.7 miles. The hike in can be a beast with a heavy pack. Pack accordingly, while being aware that the cliffs are pretty high up and can go from hot to cold quickly. Bears and Moose are often encountered as well as some very cool owls. During bug season they seem especially bad here due to the marshes and running water below, so unless you like hiking with a heavy pack in a full bug suite, avoid the cliff then. Remember you are out there and need to be self sufficient. I do seem to get some limited cell service on top of the cliff, but not on the hike in or along the Kanc, so pack your phone, but don't rely on it.

For your first time, with a bike, figure about 1-1/2 hrs to get to the right cliff going in this way, 2 hrs if carrying a giant pack and no bike. Add five or ten minutes to get to the left cliff. It gets faster once you do it a few times. I have made it in in just over an hour without a bike, jog-trotting with a light pack. 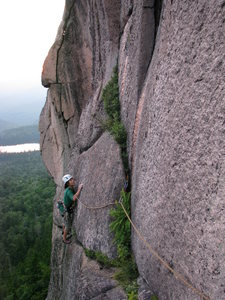 Olga balancing across the no hands section of t… 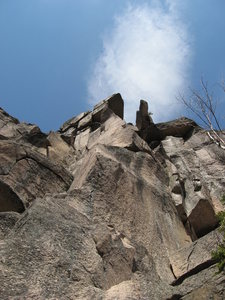 looking up at the diving board, or Butolicious… 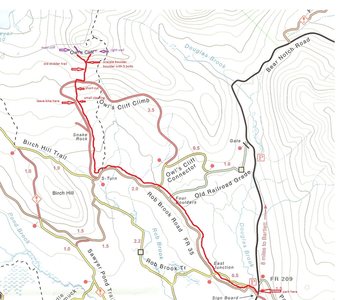 Trail map to Owl cliff. Ride bikes on the loggi… 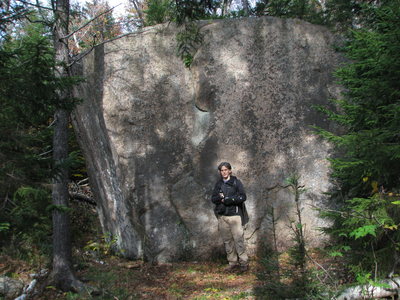 One of the nice boulders out at Owl's Cliff. Th… 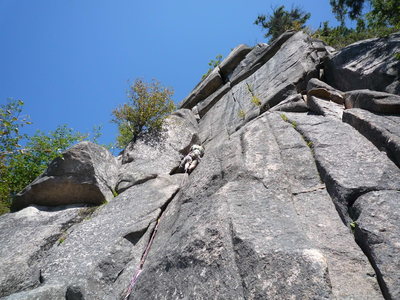 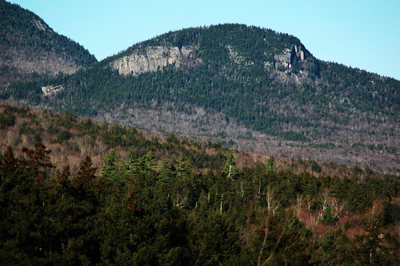 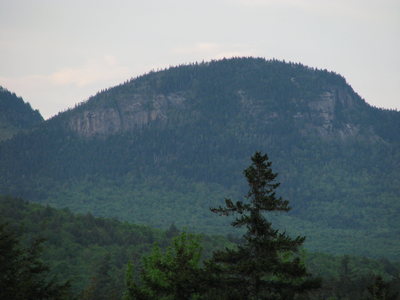 A blurry long range overview from the Kancamagu… 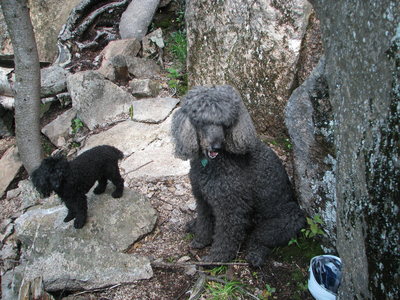 Black bear and cub seen at Owl's. Note the helm…

Showing the steepness of the second pitch of th… 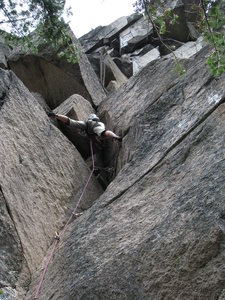 Warming up the muscles on an unnamed 5.10a, Spo… 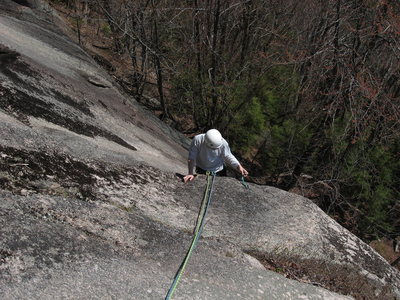 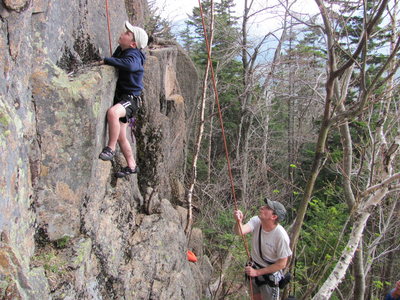 All Photos Within Owl's Cliff