While another name might exist for this area, I have chosen Chicken Creek Canyon Flatirons based on the name of a small creek that runs along the base of the wall and through the canyon that is likely to be the easiest access.

One can see this area from the Liberty side of the North Ogden Divide (east side of the mountain) just above the area where the road turns to the east. It is basically an east facing wall on the north ridge of this area that is a commonly used for backcountry skiing that has sun in the morning, shade in the afternoon.

To my knowledge, there are no previously documented climbs in the area. If anyone has any information that supersedes this post, I am willing to give credit to where credit is due.

While most of this area is generally slabby or low angle, several fun routes exist and await the adventurous climber. After exploring the area for several hours today it is probably safe to say that the majority of the routes would be rated in the low to mid 5's. However, there are several areas of overhanging or steeper rock that have pretty good potential. There are also some fun boulders hangin' around.

I can see this being an excellent area for those wanting to try their hand at well protected alpine-style multi-pitch trad climbing. Several 'slabs' offer only polished faces and would either need to be top-roped or potentially bolted.

The only issue might be accessibility. First, I am not sure of the status of the land. I believe it is Forest Service land but I know to the south (across the creek) there is some private property. Second, the approach is a bit of a bush-whack. My first time there was in April so the shrubs were matted down and you could approach on the snow field. I basically walked up Chicken Creek Canyon. An alternative approach might exist by ascending the steep ridge to the south, followed by a traverse to get to the wall.

From North Ogden, follow the N.O. Divide over the top down into the Liberty side until you make a turn to the right over a recently build culvert. This is the creek and the most logical starting point.

It took me about 45 minutes to get there the first time. 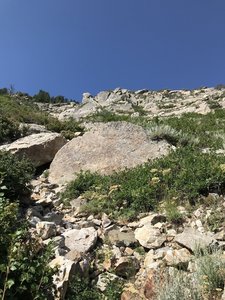 Bottom of the area. I found the best approach w… 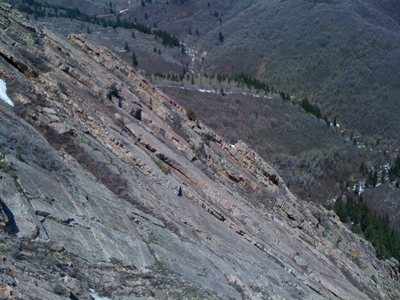