Diamond Head is a secluded Eldo Crag, and a good choice for those in search of solitude. Even on the busiest weekends, this crag is generally deserted.

There is at least one decent boulder near the Diamond Head formation, cleverly known as the Diamond Head Boulder. This boulder is located directly below the excellent 5.12 Shibumi, which climbs the western aspect of Diamond Head. There are two worthwhile arete climbs on this boulder. The boulder is in the trees, so tends to be shady most of the time.

From the Eldorado Canyon Train, starting as for Rincon or Cadilac crag, passing the Rincon cut-off. Continue on the trail until you pass a bus-sized boulder on the right side of the trail, and then about 40 feet later, a sharp left-bend in the trail. Some half-way between the boulder and the bend, a trail begins up the hill. This is almost, but not quite directly below Diamond Head, it is slightly east, still. Follow the trail up the hill and to the east side of a ridge of rock, then Sramble uphil over talus to reach a point just east of the base of Diamond head. This should take about 60-90 minutes. There are some sections of marked trail (cairns) up and down from Diamond head, but even from the top down, these can be difficult to follow, and you may end up just wandering down the hill. Although there is not much of a trail, the hike is much longer than it is difficult, if you make it a point to avoid any thickets. 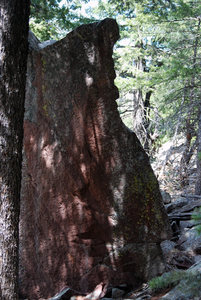 All Photos Within Diamond Head Bouldering