I recently requested that John Strand, who had moved out of the area [ Colorado ?] , transfer Brown's Ridge to me as I'd recently been there and wanted to completely update the AREA with the changes that had occurred since "the old days" when this was a "20 minute thrash in" ...then, over mostly private land.

The reply was several days in coming, and it came from Rose Strand, not John: John had passed away March 29, 2017.

DESCRIPTION: A 15-20 min. approach on an easy, established trail on Conservation property leads to a 200-250 ft slab with a variety of routes 5.6 and up. Some routes appear to be only bolted, other routes are a mix of trad gear and bolts. Route ratings are also a mix of "old school" and "modern"...mmm!

Photos of the bottom 50 ft of the slab show moss, but holds have recently been cleaned where necessary. That being said, this crag is slow to dry (lots of big trees) and the Right Side Slab seeps quite a bit, especially “The Corner 5.6”. The upper reaches of this East-facing slab are remarkably clean. It appears that any old 1/4 inch bolts have been replaced with 3/8 inch stainless, and at least one new route [ "the Edge", 5.7 (+?) ] has been put in.

HISTORY: After a spurt of activity in the mid-1980's, primarily by Jim Graham and John Marshall, the cliff apparently fell into obscurity when it was not included in Webster's 3rd (1996) edition. [maybe because of the then-private land issue???]

The following description was provided by "jnupp", I've annotated it in places: " Whiteface in North Wolfeboro is located on conservation land..... A blazed trail leads [from the south end of the parking lot] to the top of Whiteface. The [short path to the] cliff is marked by a cairn about a 15 min walk up the trail [about 2 min beyond where large stones have been used to 'harden' the trail, see photo.] Please be respectful of this property site as it is owned byLakes Region Conservation Trust!" 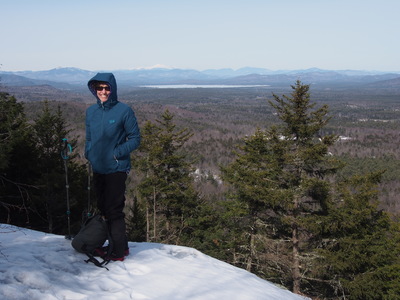 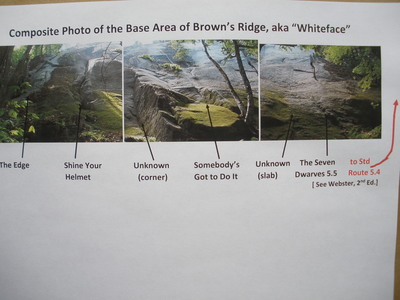 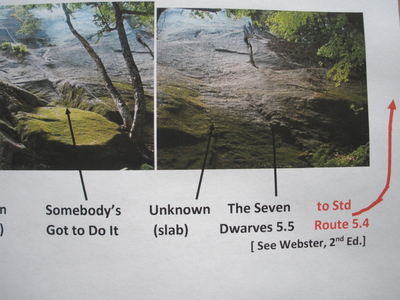 Right Side - Base of Slab 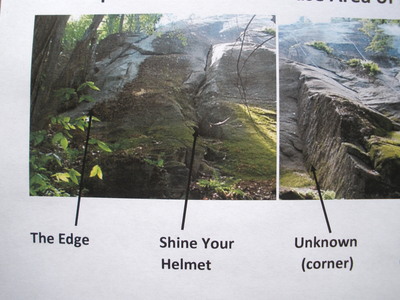 Left Side - base of slab 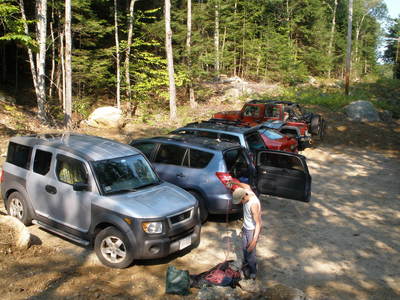 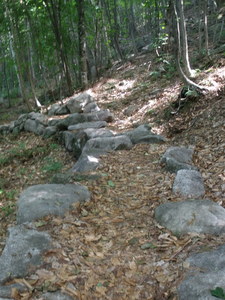 "Hardened" section of trail; when you get here… 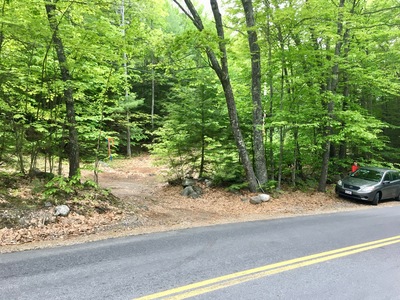 All Photos Within Brown's Ridge (aka "Ossipee Whiteface")